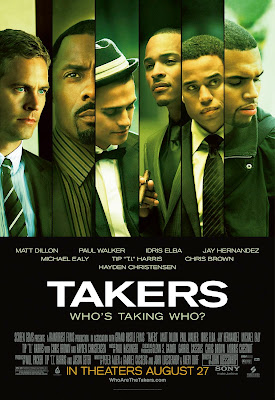 Ever since I saw the preview for Takers with The A-Team back in June, I've been anticipating it as a fun heist movie. Even after the lukewarm reviews I read and all of the hoopla about this movie being delayed because of T.I's arrest, I still had high hopes for this. But for the first time this year, I left the movie theater with a sour taste in my mouth, and it wasn't because of the popcorn that I brought from home. I've never been so disappointed with a movie starring actors like Paul Walker, Matt Dillon, and Hayden Christenson. So all the Takers really do instead of giving you good entertainment is taking your money and two hours of your life away. I don't really know how to explain the plot, so I'll try my best to do so.

In the world of notorious criminals, there are the Takers, a high elite group of robbers who are the best of the best. But when their old leader is let out of jail early, he comes back to them with the ultimate heist, a heist worth a lot of moolah. So as the Takers accept this offer, the police are investigating who they are and what they're up to, like what most cops would do. Not much more to the plot than that.

I always go into a movie with an open mind, which can explain why I love so many of them. But this one was on the edge of not being one of my open minded movies because of the many mediocre reviews. But I went and saw and realized I should of either waited for it on DVD or listen to the critics. I have never seen a movie acted out so poorly and the story so thin. I expected so much out of a bank heist movie with an ensemble cast like T.I. and Chris Brown. The script is written so poorly, it can make a 2nd graders story about an elephant going to the zoo sound like Gone With The Wind. Imagine a bunch of men talking about bank heist with a bunch of unnecessary but sometimes cool action stunts with the cops chasing them. I just saved you $10.00 for a ticket and 2 hours of your life are now spared to do something better.

Now lets get back to the cast. Believe it or not, there's only one thing in this movie that I actually enjoyed and it was the casting of Matt Dillon and Jay Hernandez as the cops who are tracking down the takers. I would of love to have seen a lot more of them in the movie than the Takers themselves, because the cops backgrounds were both very interesting and very intriguing to watch. Despite being a movie called Takers, the takers were actually quite a boring sight. None of them were likable, or watchable as soon as T.I. came on the screen. Speaking of T.I, he was one of the weakest points of the movie. His acting was the weakest of all of the actors, not to mention that the movie's release revolved around his own jail sentence. The only good contribution T.I. has with the movie is the song "Yeah Ya Know," which I find to be quite a good song. I would also like to ask: who the #^%$# is Idris Elba?!?!? Apparently he's some big British star that's been in Obsessed and The Losers. Other than that, if anyone can give me a good explanation of who he is, please tell me, since he was also a very weak point in the movie.

If the movie was released about two years ago, before T.I. was arrested, I might have enjoyed it a lot more than I did now. But for now, I'm giving it the slot of worst movie of the year so far on my list. This movie isn't even worth a movie ticket, let alone a rental. I might check it out in 5 years from now, when I ask myself why I hated the movie so much, but for now I'm saying that this the most disappointing movie I've seen this year, and that if it added a little bit more to the police story, replacd ALL of the Takers, and added one or two more stunning chase sequences, and they would've made a better movie. So what do Takers really do? Thet take away both the right to see good movies and they take away your money! If you want to see a good heist movie, I heard Ben Affleck's The Town is supposed to be an Oscar worthy movie.


My Soul To Take
Posted by Zachary Marsh at 10:01 PM No comments: Links to this post