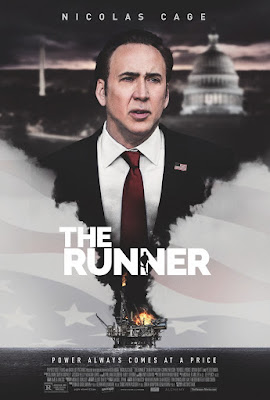 With every year comes a Nicolas Cage movie to talk about, and for 2015 we have "The Runner."  The film has the Cage-meister playing a New Orleans congressman during the aftermath of the BP oil spill.   He ends up in a scandal of his own after surveillance footage of him having an affair with another woman pops up on the internet.  For those wondering if Cage gives an over-the-top performance, he doesn't.   Despite the lack of Cage's typical craziness, his performance overall is fine.   Not the best performance of his career, but it's better than usual.  Unfortunately, his performance can't save the movie as a whole.  "The Runner" is a cliched, occasionally unintentionally hilarious, slow-paced, and forgetful 90-minute film that feels like it's just trying too hard to be more grabbing and impactful than it is.  Connie Nielson is pretty awful here, as is Peter Fonda.  If you're looking for a good Nic Cage film, this isn't it, unfortunately.   If this wasn't on your radar before, there's no real reason to put it on there now.  Not much else to say about this one.

Posted by Zachary Marsh at 3:08 PM