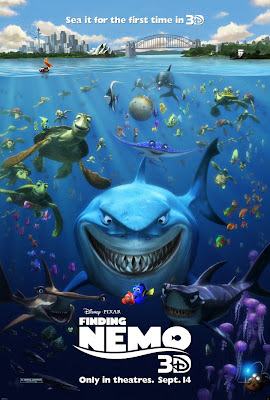 Back when 'Toy Story 3' was coming out, I made a top ten list of all of the Pixar movies and published my thoughts on each one from worst to best in anticipation of what was then a new movie. I put 'Finding Nemo,' Pixar's highest grossing movie, in my #4 slot. In that posting, I said that 'Nemo' was a Pixar movie that was meant to be re-released in the 3D format because of how the fish would pop out of the screen. Pixar must have somebody who saw my idea (I know I'm being pretentious) because two years after my original posting, 'Finding Nemo' is back in 3D. While the 3D is great, I felt the movie lost a little bit of the magic it had when I last saw the film. 'Finding Nemo' is a great movie, but I have lost a little of the love I had for it seeing it again.

Since this movie has been post converted to 3D, let's discuss that first. Having always imagined this film in 3D, I can honestly say that Pixar did a great job adding the extra dimension to the film. The depth of field between the characters and the background looks so realistic and such. Sure the goggle glasses they gave us exclusively for this movie were a little uncomfortable, but nevertheless once the film starts, the audience is in for one fun ride. It's not even just the background and the main fish that look 3D. Pixar was smart enough to make every tiny detail pop out in 3D in some way.

I can't compare this to other 3D conversions from this year since I didn't get to see them, ('Beauty and the Beast,' 'Titanic,' etc.) but the depth of field on each character made it sort of feel like one was looking through a window and into this fishy world. As good as the 3D was here, this is a movie that really doesn't need to be seen again on the big screen. In fact, it's a much more comfortable experience sitting at home watching it on DVD rather than shelling out $40 to see it in 3D. But if there's nothing else to do with the kids, and they want to see a movie, then it wouldn't be a bad choice going to this. It is better than some of the kids movies that came out this summer without a doubt.

'Finding Nemo' is a great movie by all means. The movie does feel slower after seeing it for the umpteenth time, but it is a smart, heartfelt, and funny family movie with some great animation and awesome voice roles. Having said that, families can do something better than pay to see something that they may already own on DVD. This 3D release was merely a cash grab, despite the conversion being quite good. If families want to see something on a big screen, I guess this wouldn't be an awful choice. However if you already own it on DVD, then get some microwave popcorn, plop the kids on the couch, and watch the film at the convenience of your home. Overall, 'Finding Nemo' is a must see movie for all ages, but it might be best if they should see it at home rather than shell out $15 a ticket to see it in 3D on a huge screen.

*By the way, a new Toy Story short is playing on this movie; if you do go out to see this, you will enjoy 'Partysaurus Rex*


*ORIGINAL PIXAR TOP 10 ARTICLE*
No wonder this is the most successful PIXAR movie of all time, It's So Darn Good! Finding Nemo tells the tale of a father and a son, who both happen to be fish in the near coast of Australia, Mate. Nemo, who's the only son of Marlin, a clown fish who lost all but Nemo to a barracuda. Nemo wants to go to school, but Marlin's to scared of losing Nemo like how he lost the rest of their family. But when Nemo goes, he is kidnapped by a bunch of scuba divers who work at a dentist office. So now Marlin, with the help of Dory, a bumbling blue tang fish with short term memory loss will journey to the ends of the ocean to save a little fish in peril. Who can deny this movies top of the notch sense of humor, including John Ratzenberger's cameo as the school of fish mocking Marlin when he's asking for directions.

Ellen DeGeneres also is probably the funniest character in the movie as Dory, who always has the movie's main laughing moments. Plus, this movie might have the second most memorable message, "Even if hope is lost, you should always go for your goals." I do also want to say to any PIXAR staff who are reading this that, if you have time, make either a Finding Nemo 2, or rerelease this movie in 3D. I know alot of people would probably say that, but this movie looks as if it was made for 3D, especially if fish are the main characters. So, if you want an animated beauty that really deserved its Acadamy Award for Best Animated Feature, then plop your toocheses on the couch, pop some corn, and learn a lesson as you will be Finding Nemo.

CHECK BACK NEXT WEEK FOR #3 IN THE TOP 10 PIXAR FILMS SERIES
*END OF ORIGINAL ARTICLE, ORIGINALLY PUBLISHED ON 5/28/10*
Posted by Zachary Marsh at 5:30 AM