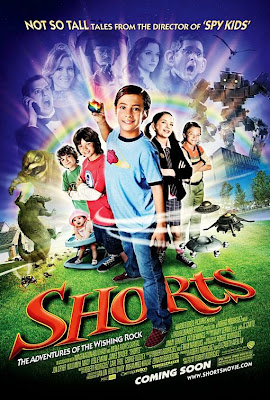 
Well bust my buttons and call me a 12 year old kid named Zach (seriously), but I have witnessed one of the most original, funny, and entertaining kid flicks of the year. Shorts is mainly a series of stories telling the stories of kids and adults who each find a magical rock that grants wishes. Eventually, they all come together to stop an evil boss of a large company before he takes over the world. Cheesey? Yes! Entertaining? Yes! Awful? NO!!!!!!!!! It may sound stupid, but if you have kids or friends, go see this because it is entertaining, interesting, and very funny! Although, I'd suggest waiting for it on DVD mainly because you don't have to see it in theaters and you could be more comfertable on your sofa with your family. Otherwise, just try to see or rent Shorts if you have kids between 5 and 13.


Where The Wild Things Are

Posted by Zachary Marsh at 10:22 PM No comments: Links to this post 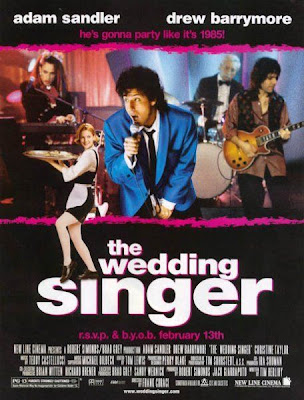 
Get ready for tear dropping laughs as I, the KID of MOVIES declares this Adam Sandler's funniest and best movie ever made. The Wedding Singer is about a man and a woman in the year 1985. The man's name is Robbie Hart. Robbie is a wedding singer who just got dumped by his soon-to-be wife. The woman's name is Julia. Julia is a waitess at most of the weddings Robbie does. Although, Julia is about to get married. Together, they become really good friends. But, as Robbie starts to develop romantic feelings for Julia, he must sweap her off her feet before the preist says I do. I have never laughed harder in my life. But, do not show this movie to kids under 11. Otherwise, sit back, heat up some popcorn, and watch The Wedding Singer.
Posted by Zachary Marsh at 10:01 PM No comments: Links to this post

I think of this movie as a more dramatic, longer, oppisate version of Forrest Gump. By the way, that's a good thing in case you were wondering. Benjamin Button is about a man named Benjamin who was born at the age of 80 and is aging backwards. Therefore, we see an entire movie about the life of this unusual man. Along the way, he meets a girl named Daisy who helps Benjamin through his life. This movie is very slow in the first half, but picks your heads up in the second. But, if you get sleepy veeeeeeeerrrrrrrrrry quickly, then watch this on a rainey day. Also, do not let kids under 13 see this. Any way, this was a very intresting and dratmatic motion picture that will capture the hearts of people for many decades and centuries to come.
Posted by Zachary Marsh at 9:47 PM No comments: Links to this post 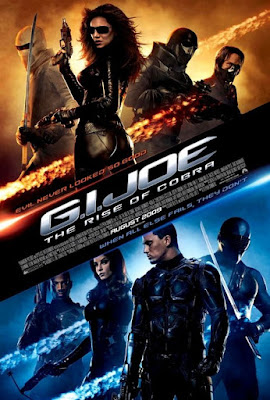 
Corection: This has bigger and better explosions than Terminator AND is better than Terminator, too. G.I. Joe is about a secret team of people called the G.I. Joe who take in two surviving soilders from a big accident. Now, this team must capture and destroy a mysterious villan named The Doctor and his evil plan to destroy every living soul on planet Earth. When all elase fails, they don't. GO JOE!!!!!!!!!!!!!?????????!!!!! This movie was very entertaining and lives up to its name, but it just isn't the same kind of movies as Star Trek, Transformers 2, Up, and Harry Potter 6 were. This movie is veeerry similar to Transformers, but it just has some of the cheesiest special effects I've ever seen. I would recommend you to go see G.I. Joe in theaters or on Blu Ray once, but after that just go and get on with your lives. Also, if you're deciding whether to see this or District 9, you should probably see District 9 because I've heard really positive thing about it, while G.I. Joe is just in a luke-warm with the critics.


The Book Of Eli

Posted by Zachary Marsh at 6:54 PM No comments: Links to this post

REVIEW: Aliens In The Attic 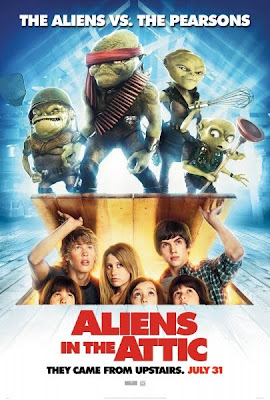 MOVIE
Aliens In The Attic


Going with very low expectations, I surprisingly enjoyed this what should've been a dumb, cheesy, sci-fi kids flick. Aliens In The Attic is about a family that takes a trip up to a vacation house along with their cousins. But as it turns out, there are aliens there to take over Earth. Now, it's up to the kids to save the world before the aliens become our rulers. This movie is very funny that the whole family would enjoy. The only criticisms I have are the aliens and one scene that was too childish for me. The deal with the aliens is that even though they look menacing, they are very clumsy and kind of funny. The aliens kind of reminded me of Fearless Leaders' assistants in 2000's flop The Adventures Of Rocky And Bullwinkle. Sure it may have had a few laughs, but I would've waited on DVD for this one.

Percy Jackson And The Olympians: The Lightning Thief


Posted by Zachary Marsh at 9:31 PM No comments: Links to this post 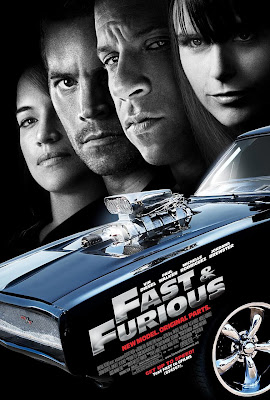 When a movie director like John Hughes comes into the industry, 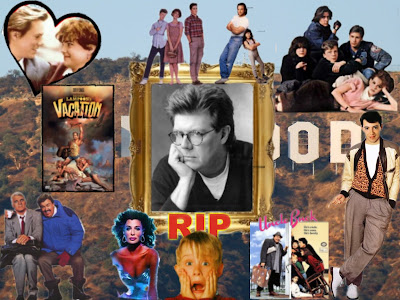 movies that are made become American classics. These classics include The Breakfast Club, Sixteen Candles, and my 2nd favorite movie of all time, Ferris Bueller's Day Off. He also produced such hits like National Lampoon's Vacation and Home Alone. To show my appreciation for this movie hero, I made a sculpture for him with this post. And John, I mean Mr Hughes, may you let g-d rest in peace. We'll miss you!!!!!!!!!!!!!!!!!!!!!!!!!!!!!!!!!! 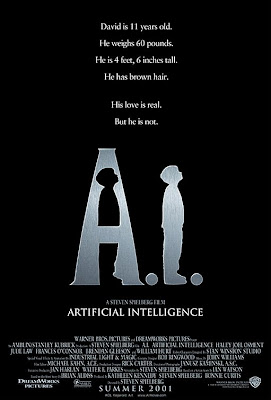 This movie is probably now the weirdest movie I ever saw. Then again, it is a Steven Speildberg movie, not that ALL of his movies are weird. A.I. is about a couple in the mid 22nd Century who's child is placed in suspended animation until they can find a cure for him. During their sons' absence, the father gets a robot that has love for the parents it's taken care of. When the son comes suddenly gets cured, the robot needs to find his true self in the world. This movie is very unique in its own way. But, it was find of freaky for me and also, toooooooooooooooooooooooooooo science fiction, even though Mr. Speildberg has great taste in story and special effects. Also, I would not recommend this for younger kids because it is way over their heads and they'll have nightmares!!!!!!!!!!!!!!!!!!!!!!!!!!!!!!!!!!!!!!!!!! Either way, adults should try to enjoy this very interesting sci-fi flick.
Posted by Zachary Marsh at 4:13 PM No comments: Links to this post 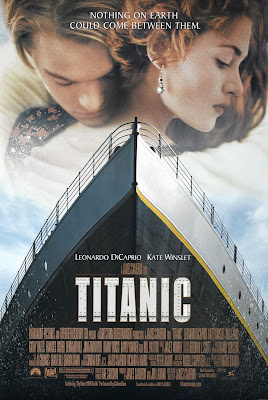 This movie, with its brilliant cast, visuals, and story is now my favorite movie of ALL time. Titanic tells the story of two complete strangers who meet on what was known as the "unsinkable" ship; a rich girl with an awful life named Rose and a tomboy who won tickets onto the ship named Jack. Together they create a close relationship that ends up becoming a forbidden love. But, when the ship collides with an iceberg in the North Atlantic, their passionate love affair becomes a thrilling race of survival. Director James Cameron, who has created the first two Terminator films and Aliens has made a beautifully crafted film filled with action, drama, comedy, romance, and heart that will live in everyone who sees this movie. Parents, I'd reccomend this movie for ages 12-14+ because there is some sexuality between the main leads in this movie. Also, the movie gets pretty sad in the last hour of the movie so have tissues near you at all times. Also, for people who can't stand sitting around for over 3 hours, then don't watch this. For me, it just flew by if you ask me. So to come clear, GET YOUR BUTT OR BUTTS UP AND SEE TITANIC!!!!!!!!!!!!!!!!!!!!!!!!!!!!!!!!!!!!!!!!!!!!!!!!!!!!!!!!!!!!!!!!!!!!!!!!!!
Posted by Zachary Marsh at 2:28 PM No comments: Links to this post

REVIEW: The Fast And The Furious 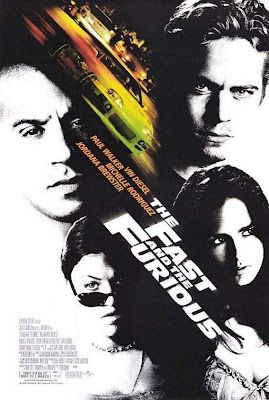 MOVIE
The Fast And The Furious

REVIEW:
I've never had a better time watching a movie as cool as this. This movie is about Brian O' Conner, an undercover FBI agent investigating in a series of car hijackings by going undercover with a street gang led by charismatic Dominic Toretto. While Brian is caught up in the middle of streetracing, he falls for Dominic's younger sister, Mia. Now, he must defeat the mysterious hiijacker before the time runs out. This movie is fun, fun, fun for anyone 12 and older. Also, people will have a great time watching this street racing action flick!! What I'm trying to say is, go to the nearest video store as fast and possible and rent The Fast And The Furious.
Posted by Zachary Marsh at 2:25 PM No comments: Links to this post