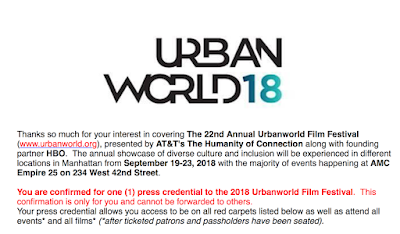 It's been a long time, hasn't it?  I hope all of you have been very well.  You might be wondering what have I been up to.  Well, I've been focusing more on my studies, and this year happens to be my senior year of college.  I'm currently working on my Senior Thesis Film, among other things.  I'm still seeing movies, as you might have guessed, and if you're wondering what I've seen and what I've thought of what I've seen, you can check out my Letterboxd page and follow me on there to keep up with every movie-related thing I'm up to.  Speaking of movie-related things, as the title of this article says, I'm covering the 2018 Urbanworld Film Festival this coming weekend!  What is the Urbanworld Film Festival, you may ask?  Well, it's a festival that's been around ever since 1997, and it celebrates the diverse voices in the world of Film, Music, and Television.  They, as their website says, "fight tirelessly to expand the definition of “urban” beyond ethnicity to include sensibility, culture, and proximity."

I attended one of their film events last year, which was the New York premiere of the film "Marshall" starring Chadwick Boseman and Josh Gad, among other familiar faces.  Despite some snafus that I, unfortunately, had to endure that night, I could tell that the festival was run with as much love and care as they could give.  They were as accommodating to me as they possibly could have been, and to that, I strongly appreciate it and thank them and their workers for their generosity that night.  When I applied as a press member for this year's festival, I honestly didn't think I would be approved.  After all, I haven't written fully on this blog since 2015, and I haven't written for We Live Entertainment since 2016.  And yet, here we are.  I don't think I'm going to be covering a whole lot of the festival, but the stuff I am planning on covering I'm very excited about.  Check back in throughout the next week or so to see reviews and recaps of some of the events I'm going to attend, one of which includes the New York premiere of director Steve McQueen's ("12 Years a Slave") new film "Widows," which boasts an incredible ensemble cast lead by Viola Davis and Liam Neeson. 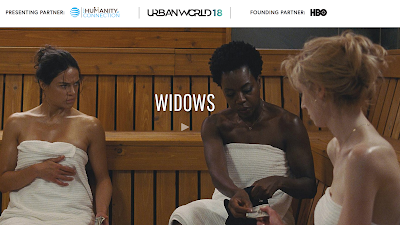 I hope you guys enjoy what I end up writing for my coverage, and I thank you all for reading my stuff over the past nine years.  If you would like to know more information about Urbanworld, check out their website at www.UrbanWorld.org.  If there's anything playing at the festival that you'd love to see me cover, let me know in the comments!  If you're in the New York area and plan on attending the festival, let me know what you're seeing!  If you see me at one of the screenings, don't be a stranger and come say hi!  Again, thank you to everyone for reading my reviews, as poorly written as they might have been,  and I look forward to sharing my thoughts on the films and events I attend this weekend.  I may decide to start writing more reviews on here again, but don't hold me to that, as my workload is very busy these days.  Hope you're all having a great day/great week, and I wish you all the very best.


Posted by Zachary Marsh at 6:15 PM No comments: