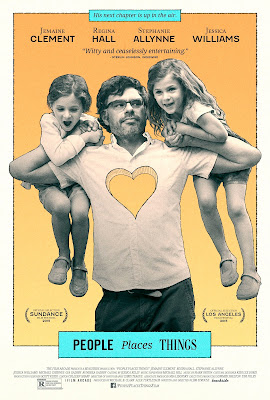 Jemaine Clement is one of those guys who can just charm the pants off of you once he enters the room and lets his New-Zealand accent flow out of his mouth.  His presence in the indie "People, Places, Things" is a welcoming one, and his character overall is someone who is engaging to watch throughout.  This film, coming to us from writer/director Jim Strouse, tells the story of a newly single father of twins.  After finding his wife cheating on him, he tries to juggle his life between raising twin girls, teaching college students how to become artists while he himself aspires to be a great graphic novelist, and keeping his romantic life in order.  This is a movie where nothing gigantic is featured in terms of telling the story, and yet every single thing put on screen feels necessary and vital to the film itself.

Aside from Clement giving hands down the best performance of his career, his chemistry with both Regina Hall and his younger co-stars bring an overall likability to the story and the cast.  Strouse manages to take realistic and harsh situations in life and give them an extremely authentic and sweet feel to it, making this 86 minute indie comedy incredibly joyous to watch.  It may be predictable, and it may have characters you might have seen before, but that doesn't take away from how charming, hilarious, and lovable this movie is as a whole.  It may just be the sympathetic hopeless romantic inside me saying this, but I really loved watching this movie.  Even when this light-hearted romp gets serious and dramatic, the emotions feel light and never too forced or over-bearing.  "People, Places, Things" is a simple, yet effective indie comedy that I'd highly recommend checking out before the year is up.  I have nothing bad to say about this, and I cannot wait to watch it again when time permits.


Posted by Zachary Marsh at 7:00 AM No comments: 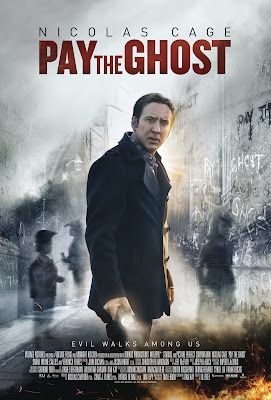 Let's get something straight: I don't hate Nicolas Cage as an actor.  Sure he doesn't often choose roles that allow him to show off his chops, but he's always entertaining to watch on screen.  Earlier this year the Cage-meister released a mediocre film called "The Runner" that, unsurprisingly, barely anyone saw or heard of.  Now it's around the time of Halloween and yet another film featuring the star of "The Wicker Man" remake is making its way out there in a similar fashion to how "The Runner" got out there.  This film is titled "Pay The Ghost," and the basic storyline involves Cage's son being abducted by a supernatural entity.  Like any parent in a supernatural thriller, Cage's Mike Cole tries any means necessary to get his son back from this pissed off spirit.

Going into movies, I like to judge them for their positive and negative aspects as well as my overall enjoyment of it.  That may explain why I enjoy so many movies, even if they're poorly received.  "Pay The Ghost," unsurprisingly, was poorly received by the vast majority of critics who saw it.  Rotten Tomatoes has it currently listed at a 6% with only one positive review to the film's name.  It may just be my positive attitude or the fact that I'm not often harsh on movies, but I didn't think this was THAT bad of a film.  There may be problems present in the film, such as the mediocre acting from child actor Jack Fulton, the cheap as hell jump scares, and the overly predictable nature of the story itself, but honestly they didn't make the movie itself horrible.  The performances from Cage and Sarah Wayne Callies are solid, the story is engaging, the directing fine, and the movie as a whole is enjoyable entertainment that is worth a watch at home.  It may not be up there with some of Cage's best movies, but it's much better than a lot of his other recent VOD-released movies.

Posted by Zachary Marsh at 6:47 AM No comments: