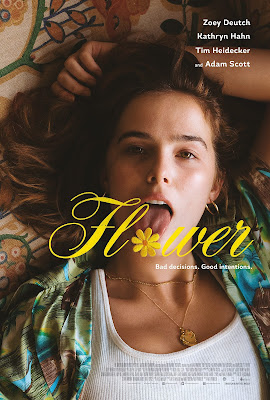 *DISCLAIMER: This review was written in April of 2017 during the 2017 Tribeca Film Festival for ScreenComment.com, and has since been reposted here to my original blog*

On the surface, Max Winkler’s directorial debut “Flower” looks and feels like any other coming-of-age teen dramedy to come out in recent memory. However, looking at how great the films in this new wave of teen films have been, that’s not necessarily a bad thing. Zoey Deutch stars as Erica, a girl who gets joy in life from hanging out with friends, having a fun time, and blackmailing unsuspecting men with the power of oral pleasure. All is great in Erica’s life, but things begin to take a different turn when Luke, the son of her mom’s boyfriend is let out of rehab. Joey Morgan plays Luke, a mentally unstable and overweight young man with a lot of demons resting under his skin. And with a plot involving a potential sexual predator from Luke’s past coming into the mix, things get more complicated than anyone could have imagined.

From the opening scene, it’s clear that Erica is a nasty woman, and not the kind that people would vote in as our next president. She’s a bitch, long story short, and the film acknowledges this despite us having to like her in the end. With any other actress, it might have been hard to do that, but Deutch is having so much fun being such a crazy and awful teenager that her charisma draws the audience into liking her. Her chemistry with all the cast members, particularly with Kathryn Hahn, who plays her mom, is great as well. Hahn’s performance on its own is yet another example of how strong of an actress she can be. It's easy to compare her work here to her character from last year’s summer breakout smash “Bad Moms,” but there’s a lot more pain and struggle here, all of which comes out at the beginning of the third act.

I’d say that Deutch is easily the standout out of the cast, but the real surprise comes from Joey Morgan. Morgan is probably most notable for “Scouts Guide to the Zombie Apocalypse,” which, for lack of a better term, isn’t the most intelligent and profound of teen-centric films. Luke is the heart and center of “Flower” as a whole, being both the catalyst for all of the forthcoming events and the most complex out of everybody else. His growth as a character feels incredibly satisfying, especially with Erica by her side. Though the outcome of their bond feels extremely odd and strange, it makes sense how they got there, and I believe the film earned that moment. I will guarantee you, though, that it will turn people off and possibly even question what they thought of the entire movie as a whole.

I haven’t even begun to scratch some of the other active elements this movie possesses, including the hilarious and fun supporting performances from Dylan Gelula, Adam Scott, and Tim Heidecker, to name a few. I also haven’t mentioned how effectively funny and moving the script, co-written by Winkler, Alex McAulay, and Matt Spicer is. “Flower” has a lot of strong things going for it, and as a whole, I think it very much succeeded both as a comedy and drama.

The third act takes an unexpectedly dark turn culminating with a rather bizarre conclusion that, as mentioned before, may very well make or break the film for people. The movie drops in quality for me once that act kicks in, but because of how strong the first two acts are, as well as the performances and the screenplay, I still recommend “Flower.” There are many other teen coming-of-age movies I’d recommend seeing over this, including Deutch’s other recent teen drama “Before I Fall,” the highly overlooked “First Girl I Loved,” and another film playing at Tribeca called “Saturday Church.” Like I said, though, I’d still give “Flower” an enthusiastically positive recommendation. Zoey Deutch’s fiery hilarious yet sophisticated performance alone makes the price of admission worth it. 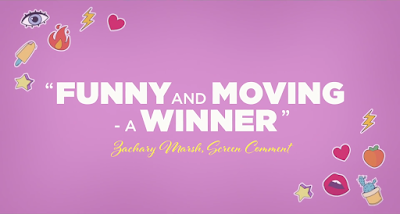 Posted by Zachary Marsh at 8:24 PM No comments: Links to this post