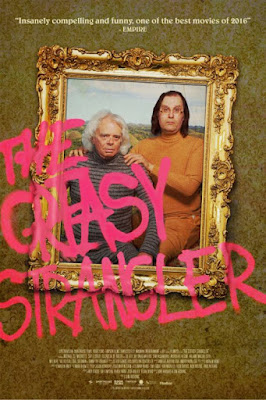 There is nothing that is, was, has ever been, and maybe never will be quite like “The Greasy Strangler.” This film, coming to us from director Jim Hosking, is a love story at its core. There’s a female love interest in there, but the real love comes between the father and son leads. Big Ronnie, played by Michael St. Michaels, is a man who demands grease in and on everything, and his son Braydon, played by Sky Elobar, complies with his father’s wishes so he doesn’t get evicted. Janet, played by Elizabeth De Razzo, becomes the target of affection for Braydon, and pretty soon Big Ronnie as well. And to think, I didn’t even begin to mention how Big Ronnie transforms himself into “The Greasy Strangler,” a grease-drenched humanoid monster hell bent on killing and strangling anyone who dares to defy him in some way.

In case you couldn’t tell, this might not be a movie that’ll appeal to everyone. "Greasy" is the type of offbeat dark comedy made for a very particular crowd of individuals who like the weird and obscure. Think of it like this: if you’re a fan of Tim & Eric, “The Eric Andre Show,” or pretty much anything that plays on Adult Swim after 1 am, then chances are you’re going to like what the grease is cooking. “The Greasy Strangler” is crude, disgusting, vile, and unapologetic in its execution, that’s for sure. But at the same time, it’s also hilarious, lovably odd, intentionally tedious, cheesy, and a whole lot of fun depending on who you are. I know people who absolutely despised this film, and I completely understand why. Based on my personal tastes, though, I thought this was something of a stroke of genius.

Director Jim Hosking has had his fair share of success in the world of short films, most notably for his segment in “The ABC’s of Death 2,” “G is for Grandad.” “Greasy” is his feature-length debut, and it shows in every single scene how much love and dedication he has put into this piece of insanity. It’s clear that he intended to make a modern-day exploitation B-movie with this, and that’s exactly what we get here. Every scene showcases disgusting imagery, from someone eating eyeballs to another dipping a hot dog in one hell of the nasty tub of grease, so if you’re squeamish at all, then this might not be for you. It’s almost as if Hosking challenged himself to outdo himself in gross factor with every passing scene, and for the most part, he succeeded. And yet, through all of the depravity and obscenities presented, there’s this sort of intelligence that oozes out of this movie’s pores.

Hosking, along with co-writer Toby Harvard, wrote the story and dialogue in such a way where things feel incredibly self-aware. There are several moments throughout the movie that are intentionally tedious, and even though in theory these scenes should overstay their welcome, they’re written with expertise and cleverness that they just keep getting funnier and funnier as they go along. Other scenes, where things abruptly end for no specific purpose, compliment these other moments ever so perfectly. It also helps that most of, if not all of the movie, have immensely quotable and ridiculously bizarre lines that will help this stick with you long after the credits end. Hell, I haven’t been able to get “Bullshit Artist” and “Hootie Tootie Disco Cutie” out of my head ever since my initial viewing of the film. I have now seen it twice, and it’s one of those things that benefits from a second viewing in my eyes. Long story short: Hosking and Harvard’s script is tasteless and completely bonkers, yet more intelligent and memorable than one could have ever expected.

Another factor in the film’s self-awareness comes from the cast members. Michael St. Michaels hasn’t had any major acting roles before this, but it’s hard to tell that from how good he is as Ronnie. Not only is he clearly having the time of his life playing this crazy older guy and the greasy persona he puts on throughout the story, but he also comes off as undeniably likable despite playing such a deviously monstrous person. Like with the script, Michaels’ performance is intentionally hokey, making him all the more entertaining. In fact, all of the acting in this movie is deliberately mediocre, which ironically makes the performances even better.

One of the first thoughts that came into my head after I first saw this was “Tim & Eric,” and that comes mainly from Sky Elobar’s performance. There’s this deadpan and awkward nature he gives off throughout that makes his character Braydon as funny as he is earnest. Being not the most attractive individual adds to a lot of the visual humor, but it’s in Elobar’s delivery that sells the character. This guy can turn an already unerotic sex scene into an absolute laugh-fest. Hell, he can even make phone sex more painfully awkward and side-splittingly funny than anyone could have ever imagined.

The person who probably gives the least “bad” performance in the movie is Elizabeth De Razzo. As Janet, Razzo gives her all by going fully nude, along with partaking in some of the most awkward and jaw-dropping sex scenes in motion picture history. “Game of Thrones” is tame compared the sex scenes featured here. While a lot of her dialogue is cheesy, her delivery is the closest to being “realistic” compared to her co-stars. This isn’t a criticism in the slightest to her or her fellow actors, but rather a compliment to her for being able to keep it straight (or as straight as anyone could be) while saying and doing really odd things. The rest of the acting is even cornier than the three leads, which help to both add to the camp-factor of the movie and the memorability of some scenes.

When I say this movie isn’t for the faint of heart, I mean that in every sense of the phrase. What we have here is easily the grossest, vilest, and most depraved film to come out this year, and that’s saying something considering we had a movie come out that featured an animated food orgy just a couple of months back. Along with insanely disgusting imagery being present throughout, there’s also a lot of male nudity from the two male leads. Both schlongs are prosthetic, and both are used to quite hilarious lengths (pun intended), but if that irks you at all, then I don’t even know that you could ever be fully prepared to see this. And as you might have expected from both a low-budget indie and a homage to exploitation films of the past, the practical effects look as corny as they are brutal. I mentioned some examples of gross imagery before, and believe me when I say that those aren't the most disgusting things shown in the film. These effects are done not just to disgust the viewer, but to also have us laugh at the insanity that’s being presented throughout this movie.

It’s funny how this and another Sundance hit from a first-time writer/director came out on the same weekend, the other one being Nate Parker’s “The Birth of a Nation.” Both films are not easy to sit through, but this one is less accessible to an extent. “The Greasy Strangler” requires a special taste in films in order to enjoy fully. I know quite a few friends of mine who would love this, and I know just as many who would despise this. Regardless of your overall thoughts on the film if you end up seeing it, I guarantee you that it will be hard to forget it. If you’re like me and love these type of obscure indie “midnight movies” that go all out and push any boundaries one may have, then absolutely seek this one out. This is a cult classic in the making, and I really hope people manage to find it and embrace it in all of its greasy nature. I’ve seen “The Greasy Strangler” twice now, and I can’t wait to see it a third time. It’s disgusting, depraved, shocking, crude, and I had an absolute blast with every second of it.


ME WITH ACTORS MICHAEL ST. MICHAELS, SKY ELOBAR, AND ELIZABETH DE RAZZO AFTER THE NEW YORK PREMIERE/AFTER PARTY FOR "THE GREASY STRANGLER" ON OCTOBER 3RD, 2016. 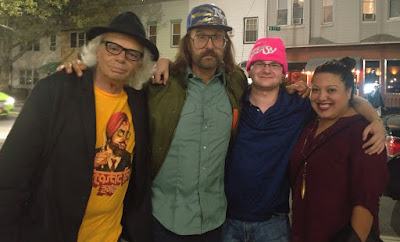 Posted by Zachary Marsh at 1:02 AM