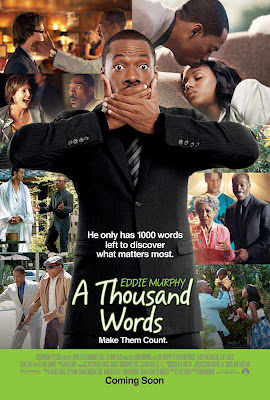 This movie has been almost completely forgotten by anyone who went to see it, and I can see why that is. 'A Thousand Words' has been on the shelf for about three years, and it was just released about three weeks ago with an incredibly bad 0% on Rotten Tomatoes. The movie is about a fast talking businessman named Jack who gets into the wrong deal with an Indian guru. As punishment, a tree magically grows in his backyard and creates a spiritual bond with Jack. For every word Jack says, a leaf falls off the tree. Once all of the leaves fall off the tree, Jack will die. My younger sister wanted to see it, so I went along thinking I was going to hate the living crap out of it. Surprisingly enough, I did not hate the movie at all! Why does this film have a 0% while other crappy films like anything Adam Sandler has recently brought us has over that? (Not including 'Bucky Larson: Born to Be a Star') Eddie Murphy was decent for not being able to speak for about half of the film. The supporting cast, including Kerry Washington and Allison Janney is decent enough to not be annoying. Cliff Curtis is clearly the funniest guy in this movie playing the wimpy assistant to Murphy's Jack McCall. The script is unoriginal, but it did keep me entertained.

Surprisingly enough to top all of this, this movie actually became a serious drama about life towards the second half; and for some reason it touched me in a way I did not expect to be touched.  Brian Robbins, who directed this movie along with a couple of other panned Murphy movies, has proved to be my ultimate guilty pleasure director. His movies aren't great, but I am entertained by them. I feel more people should have given this movie a chance, but I can clearly see why they didn't. Because the film was shot in 2008, some of the jokes were pretty dated. That didn't stop me from surprisingly enjoying this movie a little. It's not worth going to a theater to see, but a DVD rental is the perfect time to check it out if you and your loved one get bored one night. Eddie Murphy is decent, the script is dismal but acceptable, and there's no harm to be had at all from this PG-13 spiritual dramedy. Odds are I will watch this movie again and probably hate it to death because that's the kind of guy I am, but for now I'm going to accept the fact that I didn't hate this movie at all. 'A Thousand Words' seems destined to become my guilty pleasure of 2012, and I am still baffled at my feelings towards this film.


What to Expect
When You're Expecting