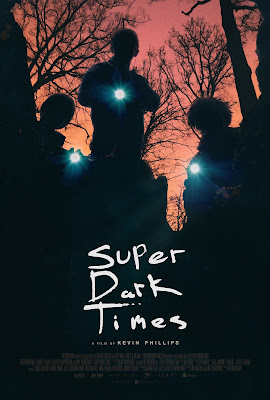 
*DISCLAIMER: This review was written in April of 2017 during the 2017 Tribeca Film Festival*


It’s a rarity when movies have a character with the name “Zach.” It’s even more of a rarity when “Zach” is the name of a film’s lead character. When I was reading the synopsis for “Super Dark Times” and saw my name as the central protagonist, immediately I took interest. As it turns out, there’s a pretty great movie surrounding my majestic, underused name. Set in, as the press notes state, “mid-90s suburbia,” this movie revolves around two best friends, Zach and Josh. The two spend a lot of time together shooting the shit, swearing, and talking about girls. One girl in particular, named Allison, has caught the eyes of both guys, with Josh being more vocal about his crush. One day, the two boys are hanging out with a couple of other friends of theirs, and all is going just hunky dory. And then, shit hits the fan. Tragedy occurs! Blood is on thy hands! So the rest of the film deals with the aftermath of what happens on that fatal afternoon.

What I admired so much about “Super Dark Times” is how it portrays the different psychological effects it has on Zach and Josh. The two respond to what happened that day in ways that are both understandable and incredibly believable. The two actors playing Zach and Josh, Owen Campbell and Charlie Tahan, give genuinely human performances that, being the central core of the story, elevates the entire film from good to great. Elizabeth Cappuccino delivers strong work as well as Erica, with her chemistry with the boys, again, being incredibly believable. Their relationship together is very similar to a romantic subplot in the 2013 indie “The Kings of Summer,” yet this movie manages to take that type of subplot and make it feel fresh once again. The film wouldn’t work as well as it does, though, if it wasn’t for Ben Collins and Luke Piotrowski’s dark and intense screenplay, as well as Kevin Phillips’ eye for getting the best performances out of these actors and telling such a powerful story.

It’s not a perfect movie by any means, with the lack of intelligence from other characters when trying to put two and two together being questionable, as well as how the opening scene doesn’t feel necessary to the story when thinking back on it. That being said, I was both on the edge of and pressing back into my seat throughout this movie. “Super Dark Times” is, as the title suggests, super dark. The performances are stellar, the script sharply written, and the film well-directed as a whole. For his feature film debut, director Kevin Phillips has crafted an intense, relatable, and fascinating look into the teen psyche from multiple subjects. Elements of “Donnie Darko,” “Stand By Me,” and “The Dirties” are scattered throughout, but I can see this becoming something of a new cult classic along the lines of those films. If you’re attending the Tribeca Film Festival currently, attending another festival this is playing at, or if it ends up coming to a town near you when it’s eventually released, I’d highly recommend going and checking this out. You won’t come out of the film feeling good, but you will come out feeling incredibly satisfied, tense, and maybe even horrified.

Posted by Zachary Marsh at 1:59 PM No comments: 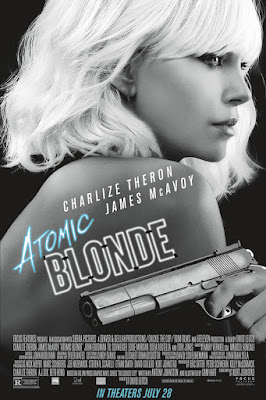 At this year's SXSW Film Festival in Austin, Texas, two action films duked it out for the love of those attending the world-famous festival.  The first of those films was Edgar Wright's "Baby Driver," which I found to be a fun movie with a decent chunk of flaws that kept me from loving it.  The second film was "Atomic Blonde," the Charlize Theron-starring flick based on the graphic novel "The Coldest City."  Both films are different in story and tone, and both have their fair share of flaws.  Contrary to popular opinion, though, I have to say that I enjoyed "Atomic Blonde" a whole lot more.  For those who don't know, "Atomic Blonde" takes place at the tail-end of the Cold War, just as the Berlin Wall is coming down.  Charlize Theron plays MI6 Agent Lorraine Broughton, and Broughton is sent undercover to Berlin, Germany to both investigate the murder of a fellow agent, as well as obtain a list containing all the names of double agents.  Because this is an action movie, expect a lot of blood and combat between Lorraine and everyone who gets in her way.

Before anyone's panties get twisted and accuse me of being crazy and wrong for liking "Blonde" more than "Baby," let me point out again, I don't think either are perfect movies.  In fact, there are points where "Blonde" is a much inferior film to "Baby."  For example, even though I found the story and characters to be more interesting in the former, the intelligence of some of the characters, particularly our lead, is very questionable at times.  Without spoiling too much, Broughton is made out to be an intelligent badass, and yet the film makes it pretty clear in telling you who the real double agent is early on and why you shouldn't trust him or her.  And yet, Broughton still manages to trust them despite having been deceived by them at least once already.  For a character who is otherwise very intelligent, she could be very naive and dumb as well.  It's because of this that the film also suffers from being pretty predictable at certain points.  Not too predictable where it irritated me or anything, but enough where it became noticeable and slightly glaring at times.

So yeah, that's all I got.  That's everything negative I can say about the movie.  I had a blast with "Atomic Blonde," plain and simple.  If you thought Charlize Theron was a badass as Furiosa in "Mad Max: Fury Road," she somehow managed to surpass herself on the badass meter.  The dedication to her physical performance is quite admirable, and even if you might have problems with her British accent's consistency, I was able to let go of that because of the amount of commitment she had to the role, among other reasons.  James McAvoy is just as fun as he always is playing the charismatic David Percival, someone who consistently keeps you asking yourself whether or not you can trust him.  Everyone else in the supporting cast, from John Goodman to Eddie Marsen to Sofia Boutella all have their moments to shine, and all overall deliver solid performances.

The strongest tool the movie has is director David Leitch.  Having co-directed the wickedly awesome "John Wick" previously, Leitch manages to tell a captivatingly interesting and entertaining story, as well as incorporate some impressive-as-hell action sequences into the mix.  There's an action sequence that happens at the end of the second act that is meant to simulate a single take.  While it's obvious where the cuts are in the scene, the fact that it doesn't take away from the sheer brilliance of the sequence (which lasts about 10-15 minutes, by the way) really says something about Leitch as a director.  The choices of colors in certain set pieces, as well as the stellar music choices, add to the cyberpunk neo-noir vibe Leitch is attempting, and successfully, pulling off.  If anyone had any worries about Leitch being the director of the upcoming "Deadpool 2," "Atomic Blonde" will throw all of them away.

Like I said before, "Atomic Blonde" isn't without its flaws.  I know some who had more problems with it than me, but hey, it's all about taste, I guess.  While the soundtrack and the action sequences were pretty good in "Baby Driver," I found the soundtrack and action sequences in this movie to be much more captivating, inventive, fun, and exciting.  The editing in "Baby" is infinitely better than the editing in "Blonde," but as I said, "Blonde" kept my interest and adrenaline flowing more so than "Baby."  It might not be fair to compare the two films to one another, but considering they're both R-rated action thrillers with unique soundtracks and talented directors that happened to both play at this year's SXSW Film Festival, I'd say it's fair enough.

So overall, I found "Atomic Blonde" to be a thrilling and fun action/spy thriller that kept my eyes glued to the screen all the way through.  Charlize Theron kicks ass, the soundtrack rocks, the action itself ranged from awesome to jaw-dropping, and the story kept me invested enough to want to continue following Lorraine throughout her endeavors.  With some of the action sequences that take place during the film, particularly the aforementioned 15-minute single take scene, make this flick something that deserves to be seen on the big screen.  I cannot wait to see this movie again, and I really hope I'm able to see it on the biggest screen possible with the loudest sound out there.  Whether you think this is better or worse than "Baby Driver" is up to you, but regardless, both are worth seeing on the big screen.  This one just grabbed me more, I guess.

Posted by Zachary Marsh at 1:46 PM No comments: