REVIEW: The End of the Tour 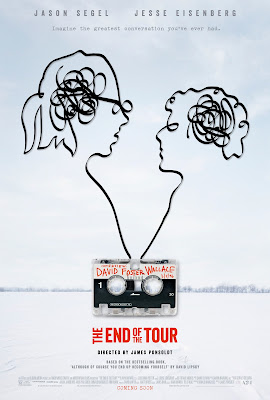 MOVIE
The End of the Tour

In today's day and age, people seem only to talk through the use of digital devices.  Texting, Skyping, and calling are just some of the examples on how people communicate these days.  That's pretty sad to think about in all fairness. Movies like "The End of the Tour" show just how reliable our generation has become to modern technology.  This film tells the true story about a road trip between two strangers.  David Lipsky, a writer for the New York Times, gets the opportunity to interview and join author David Foster Wallace on the last run of the book tour for "Infinite Jest."  Jesse Eisenberg plays Lipsky, and comedian Jason Segel steps out of his comfort zone to play David Foster Wallace.

Segel has done dramatic work before, most recently in the overlooked "Jeff, Who Lives At Home," but this is the first time he has truly stepped out of his comfort zone.  As Wallace, Segel loses himself both in his look and in the way he acts.   It's the first time where he becomes another character, so much so that it's as if the audience is watching the real David Foster Wallace on screen.  Jesse Eisenberg also delivers some great work as David Lipsky.   Although it's still easy to see Eisenberg playing a character, this felt like his most genuine and human performance to date.  The scenes with Eisenberg and Segel, whether they're arguing or getting along, are the glue that holds everything about this movie together.   The supporting actors are good and all as well, but it's these two that will stay in the mind long after the credits role.

Credit must be given to director James Ponsoldt for, like Segel, stepping out of his comfort zone.  His previous two films, "Smashed" and "The Spectacular Now," both involved struggling alcoholic protagonists and how they're trying to adapt to society and be with the ones they care about the most.   This film is just about these two individuals going on a trip together and bonding over their similarities and differences.  Nothing about it feels cinematic, but rather like a found-footage documentary involving these two on this escapade of theirs.  Donald Margulies, in his first theatrical screenplay, doesn't sugar coat anything shown on screen and allows the audience to see these characters as real people, nothing more and nothing less.   Considering other films to come out about people connecting, this is pretty rare to come across.

There's nothing that feels groundbreaking or monumental in "The End of the Tour," but that works to the movie's benefit.  The pacing is slow at times, and the ending didn't feel as impactful as it should have been, but, all in all, this is a great example of a "slice of life."  The main comparison that comes to mind is Richard Linklater's "Before Sunset."   That movie takes place over the course of 80 minutes in real time and is just a long conversation between Ethan Hawke and Julie Delpy.  Out of context, that sounds like a boring concept for a movie.  However, it's because of the written dialogue and the chemistry between the main leads that make a story like that, and like this, engaging and entertaining to watch.  "The End of the Tour" at the end of the day is a quiet, raw and powerful indie drama that manages to work without the use of unneeded melodrama or any significant kind of conflict affecting the outcome of the story.

Sleeping With Other People

Posted by Zachary Marsh at 3:01 PM