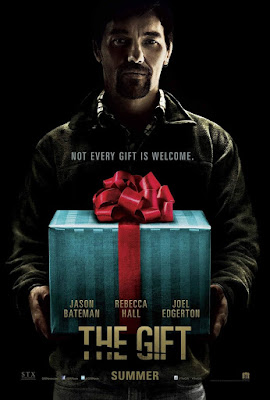 Unlike the majority of trailers to come out these days for horror-thrillers, the one created for "The Gift" surprisingly gives just the right amount of the film away.  Instead of showing the creepiest stuff, the trailer gave the audience a feel of the suspense to come.  It even leads the audience to believe that the story was going to go in a different direction than the film itself ended up doing.   This movie comes from the mind of actor Joel Edgerton, who makes his directorial debut and stars in the film with Jason Bateman and Rebecca Hall along with writing the film's screenplay.  The basic plot of the film has Bateman and Hall's married couple moving into a new home.   Bateman's Simon ends up being confronted by a strange guy he knew in school named Gordo, played by Edgerton, and let's just say that Gordo does some unusual stuff that leads to borderline horror-film material.

What could have been just a standard home-invasion thriller ends up being something a lot creepier and more intelligent than expected.  As with most horror films, there are a couple of jump scares that feel very cheap.  Having said that, the real tension this movie has relies on how the characters react to the actions of others, along with the fact that we don't know a whole lot about Gordo's past with Simon.   Not to mention, this movie keeps the audience guessing until the very end, which in today's world of film is pretty hard to accomplish.  Overall, "The Gift" is a gift that keeps on giving, pun intended.  Along with being a thrilling film, it also features solid writing, great acting, and a lot of promise from Edgerton as a director.  Check out this one if it's still playing near you, and hopefully with at least one person at your side in the theater.

Secret in Their Eyes