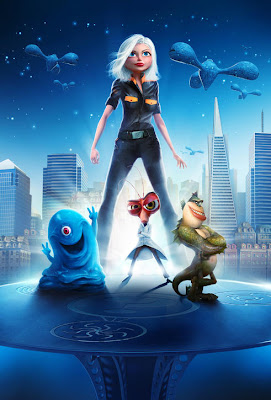 Get ready fror a 3D adventure filled with action, adventure, and B.O.B. Monsters VS Aliens is about a woman named Susan Murphy who has an unexpected turn on her wedding day, since she gets hit by a meteor which makes her grow into a 50ish foot woman. Then, the military knock her unconcious. Once Susan wakes up, she finds herself locked inside a secret military facility filled with monsters, which include a 500,000 year old fish man named The Missing Link and an indestructable gelatnous form named B.O.B. But, when an alien comes to Earth to claim the power that was from the meteor, it's Monsters VS Aliens! This movie is the ultimate 3D experience. Any kid would enjoy this fun rollar coaster. My suggestion, see it in 3D, otherwise it makes no sense to see it at all. SO GO SEE MONSTERS VS ALIENS OR ELSE...
Posted by Zachary Marsh at 5:51 PM No comments: Links to this post 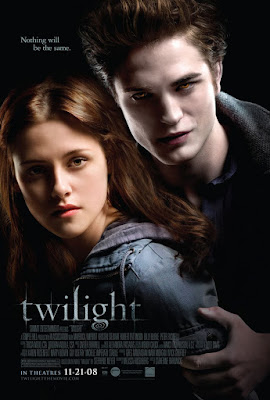 If you like romance, action and vampires then you'll love Twilight. Twilight is about a girl named Bella Swann, who moves from Phoenix, Arizona to a little town called Forks, Washington where she meets a mysterious boy named Edward Cullen. She keeps thinking and seeing him. One day he disappears and Bella thinks he hates her and feels upset. Eventually, Edward comes back and introduces himself to Bella. Then, Bella notices strange things about Edward. For example, Edward pushes a car away from Bella seconds before killing her, he never goes into the sun, andnever eats anything. Bella then puts the pieces together and relizes that Edward is a vampire. This movie was a great adaptation of the Stephanie Meyer Best-Seller. It's something anyone who's a fan of Harry Potter or Lord Of The Rings should see. But be warn parents, at the end of the movie, there is a blood bath from a human. So, watch out Harry Potter, there's a new movie in town and its name is Twilight.
Posted by Zachary Marsh at 2:26 PM No comments: Links to this post 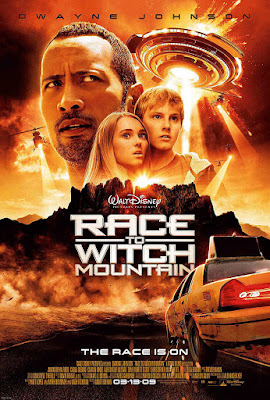 If you kids and adults liked Dwayne Johnson in The Game Plan (or Get Smart), then get ready for a rollar coaster disney film called Race To Witch Mountain. This film is about a Las Vegas cab driver with a juvy record named Jack Bruno (Johnson) who stumbles along two teenager kids who appear in his taxi. He then finds out that these two kids have paranormal powers and are indeed aliens from a different galaxy 3000 light years away. Suddenly, he is pulled into an adventure to save the two worlds before the invasion begins. This film was awsome for people who enjoy classic action films and the original book and original films made in the 1970s. Adults will enjoy this film too. And to make it Disney, there is a good amount of comedy put into this action packed adventure. Trust me, if you didn't see it yet, go see it in theaters. It is an awsome thrill ride.
Posted by Zachary Marsh at 2:07 PM No comments: Links to this post 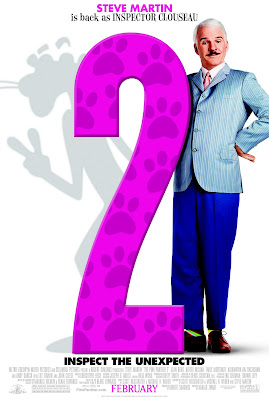 The Pink Panther 2 is a knockout hilarious movie filled with gags, twists, and Inspector Clouseau. The Pink Panther 2 is about several valuables being stolen by a person only known as "The Tornado." One of these valuables include the Pink Panther diamond. Now, dectectives and agents are assembling a group known as "The Dream Team" and Clouseau is chosen to be one of them. Now, this group must find the valuables and The Tornado before something very bad happens. This film was kind of obvious to me at the end, but I still enjoyed all of the mishaps and gags Steve Martian puts into as Clouseau. I'm telling you, its not as bad as everyone (including my sister and dad) says it is. Try to go see this before it leaves the theaters. But, if you don't get to see it in Theaters, then rent it on DVD when it comes out.
Posted by Zachary Marsh at 5:30 PM No comments: Links to this post