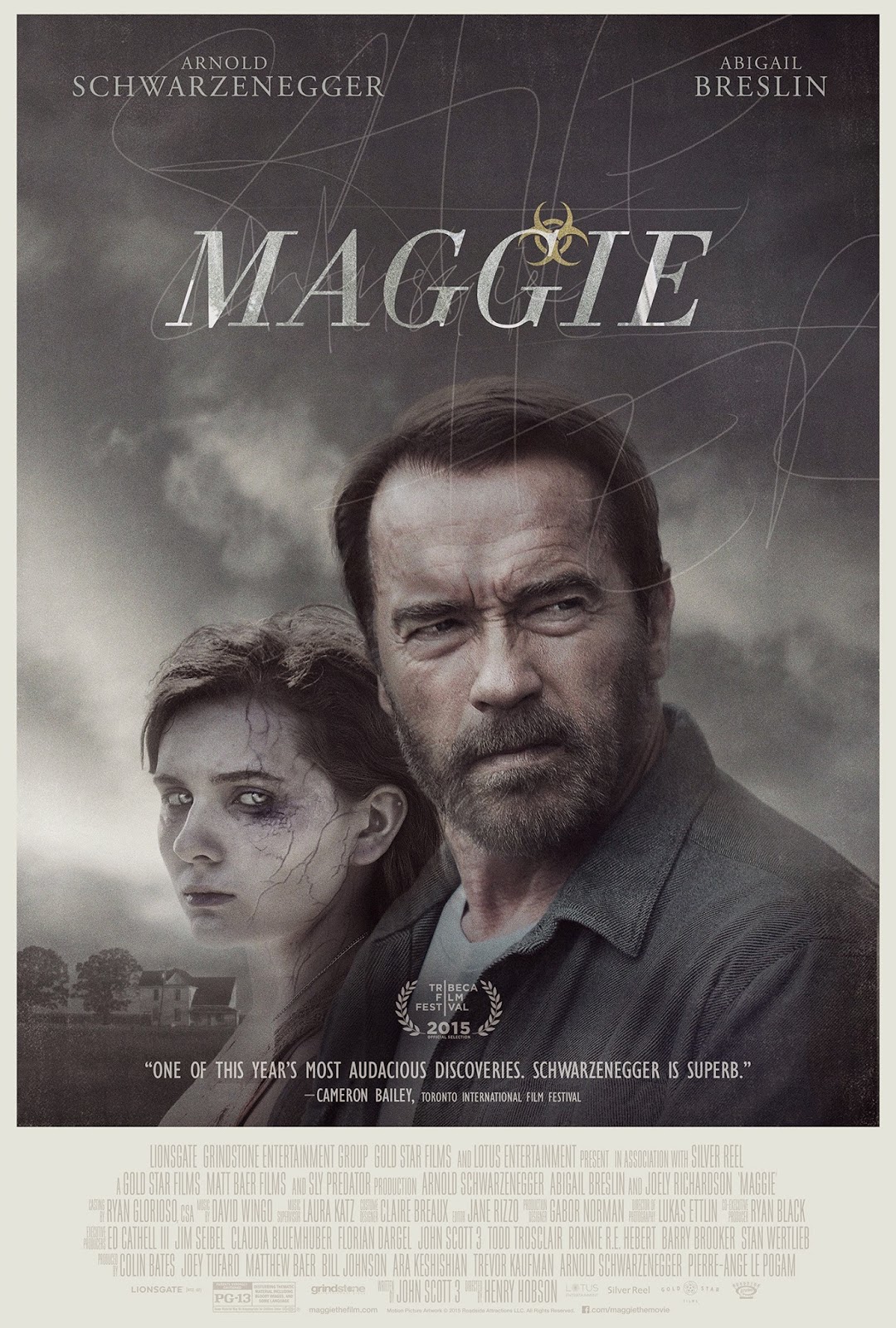 Arnold Schwarzenegger is one of the most iconic movie stars of all time, hands down.  From "The Terminator" series to "Total Recall" to the "Conan the Barbarian" movies, Schwarzenegger has placed himself in the testosterone-filled hearts of every human being who has ever seen at least one of his films.  Being the macho action star he is, it would make sense that a film starring him in an apocalyptic world filled with zombies would be badass and a whole lot of gory fun, right?  Well, in this case we're all wrong.  In Henry Hobson's "Maggie," Schwarzenegger plays a man whose daughter, played by Academy Award nominee Abigail Breslin, is slowly turning into a zombie due to getting bitten.  This causes daddy Arnold to take care of his daughter as she slowly turns into the carnivorous and mindless beasts who have become so popular within the past several decades.

The film itself plays out more as a family drama than a thriller, which may turn viewers away upon first glance.  The thought of Hollywood's most badass Austrian actually trying to act in a family-themed drama about coping with impending death is practically alien to most moviegoers.  Yet past all of that skeptical criticism is a surprisingly well-acted and well-constructed movie that, personally, I would recommend checking out.  Schwarzenegger surprisingly gives a believable and moving performance here, and Breslin's slow transformation into a zombie is really well done thanks to her work.  It's not a perfect movie, as some of it is boring and it would have been nice to have Schwarzenegger do what he does best, but all in all this is a solid family drama/thriller that I'd recommend checking out solely to see the iconic star go out of his comfort zone.


Posted by Zachary Marsh at 1:00 PM No comments:

MINI-REVIEW: Welcome To Me 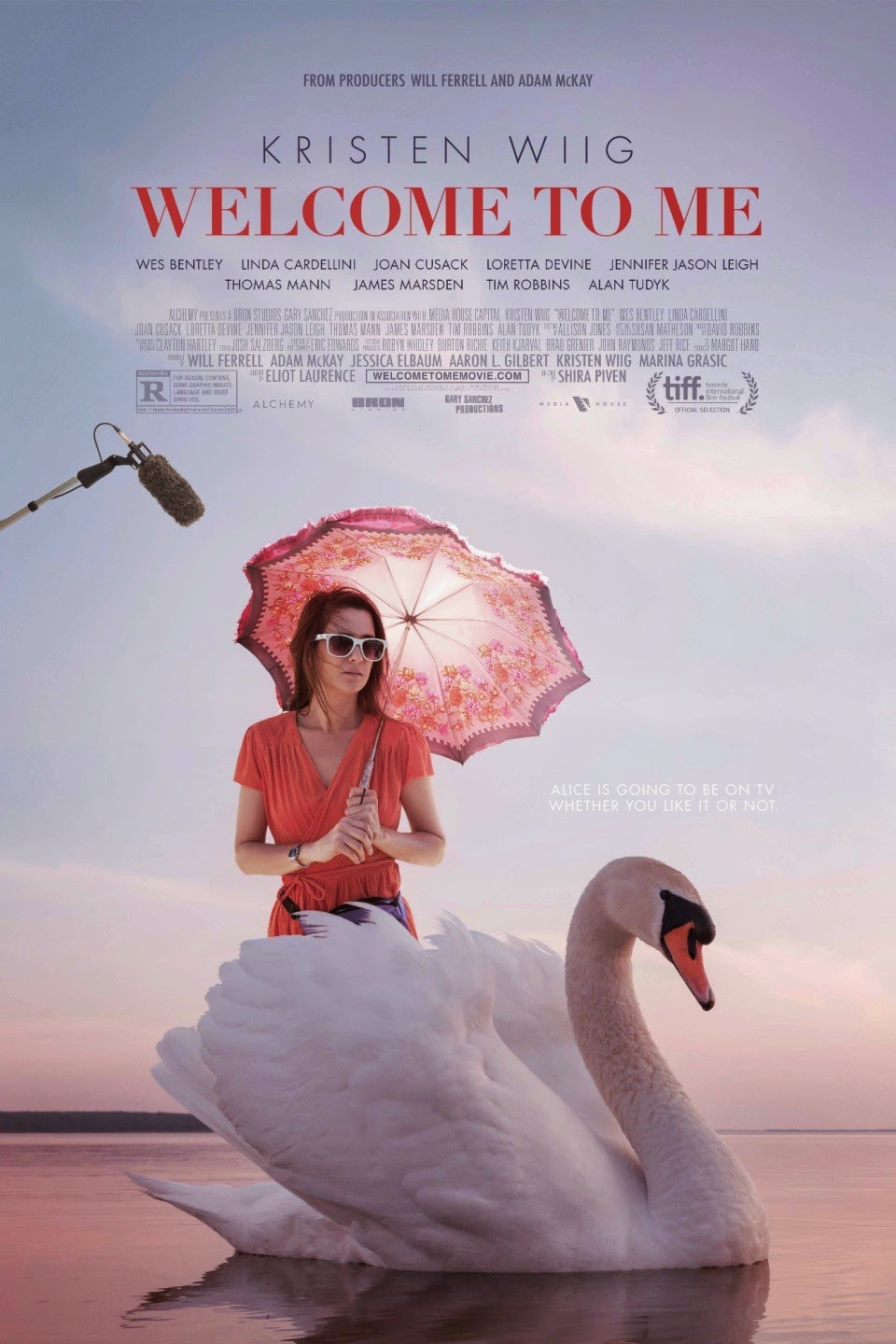 MOVIE
Welcome To Me

Kristen Wiig is arguably the most gifted comedian to come out of "Saturday Night Live" in its entire run.  With her sharp impressions, incredible timing, and hysterical characters, Wiig stole every skit she was in and proved herself to be a bonafide star before "Bridesmaids" even existed.  However there's always more to comedians than is shown on the outside, and in "Welcome to Me" we get to see Wiig step out of her comfort zone to play a fascinatingly weird character.  Her character Alice Kleig is a woman with Borderline Personality Disorder who ends up winning $86 million thanks to a lucky lottery ticket.  Being a fan of Oprah, Kleig decides to spend her money on her lifelong dream: to be the star on a reality talk show about herself.  Being a woman with her condition, though, it's apparent that she's not exactly going to please everyone she comes across, but as long as she's doing what she wants, that's all Kleig cares about.

The first 20 minutes of the movie were a bit rocky, to be honest.  The tone was inconsistent and Wiig's character was just flat out annoying.  It was when the actual segments of her talk show, also titled "Welcome to Me," began that the film really began to shine.  Wiig is absolutely great in this, blending naïvety and obnoxiousness to create this shockingly funny and flawed individual.  A lot of the humor in the movie is very peculiar, which is what made it funny to begin with.  The dramatic aspect of the film really complimented the character it was showing on screen, and in turn showcased a flawed individual who doesn't realize how much her money is really worth.  Kleig spends her earnings like a guy "making it rain" at a strip club.  "Welcome to Me" isn't Wiig's strongest film overall, but it is the strongest performance she's given in her career thus far.  The movie may not appeal to everyone, but for what it's worth, it's a fascinating, dramatic, and funny look into the life of a mentally damaged woman who doesn't understand the differences between what's right, what's wrong, and what's appropriate for public television. 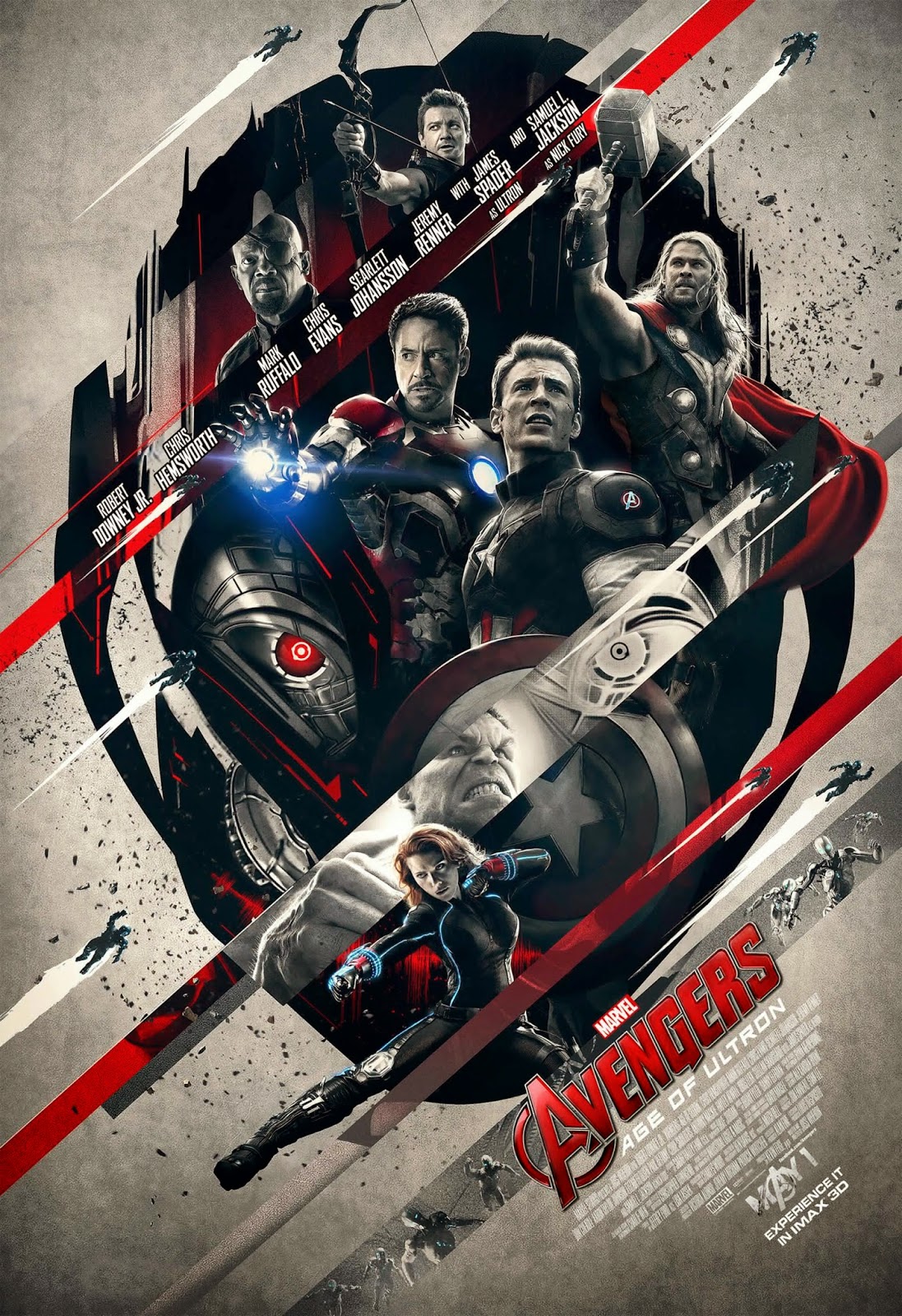 Joss Whedon and Marvel surprised audiences around the entire world when "Marvel's The Avengers" made its debut on the big screen back in 2012.  People were merely hoping that it would at least not be the colossal disaster it had the potential of being.  What they got was a witty, fun, and energetic superhero flick that gave all of their favorite heroes the proper amount of screen time and kept everyone engaged throughout its 2 and a half hour runtime.  Jump to present day, and the dynamic duo of Whedon and Marvel are back and ready to impress once again with "Avengers: Age of Ultron."  Along with the returning cast from the first film, including Robert Downey. Jr, Chris Evans, and Samuel L. Jackson, we also have new entires such as Aaron Taylor-Johnson and Elizabeth Olsen playing a set of twins with genetically altered powers, as well as James Spader as the titular villain Ultron.  Ultron is an artificially intelligent robot created accidentally by Tony Stark with the motive of wanting "peace" on Earth.  Unfortunately that peace involves the extinction of The Avengers and the rest of the humans on the planet, so it's up to our favorite heroes to stop him before time runs out.

People going to these movies are probably expecting more crazy action and humor from their favorite characters, and for the most part they get it.  Everyone delivers on the action and the comedy, with some jokes being funnier than others.  However, what makes this film stand out from its predecessor is the amped up dark-tone and drama presented.  There are some really well executed moments of character development and drama that really capture emotions well and help us as an audience to humanize and empathize with these larger than life individuals.  The visuals are also spectacular, particularly with the designs of James Spader's Ultron and Paul Bettany's Vision.  Both of these guys, along with Jeremy Renner's Hawkeye, steal the show from everyone else thanks to their delivery, charisma, and general awesomeness that oozes off of them in every scene.

Joss Whedon's writing and direction go hand in hand with one another to make a fast-paced, gripping, and fun summer blockbuster film that, honestly, is just as good as its 2012 predecessor.  It's a shame that Whedon and Marvel won't be doing any more projects together, but that may be for the best considering they don't exactly see eye to eye on things.  Unfortunately Marvel wants this specific formula to happen that they've been doing with nearly all of their films, and that, to me, is what detracts from films like "Guardians of the Galaxy."  Whedon at least put his own flavor into what he was doing and managed to tell a cohesive story while also having strong character development and witty humor to compliment everything else.  Overall, "Avengers: Age of Ultron" is a whole lot of fun to see, and it's definitely one of the best movies of the summer thus far.  Not really worth paying to see in 3D, but if you can see it on the biggest screen possible, the experience will be a whole lot better.  This movie deserves to be seen on the big screen.

Posted by Zachary Marsh at 3:00 PM No comments: 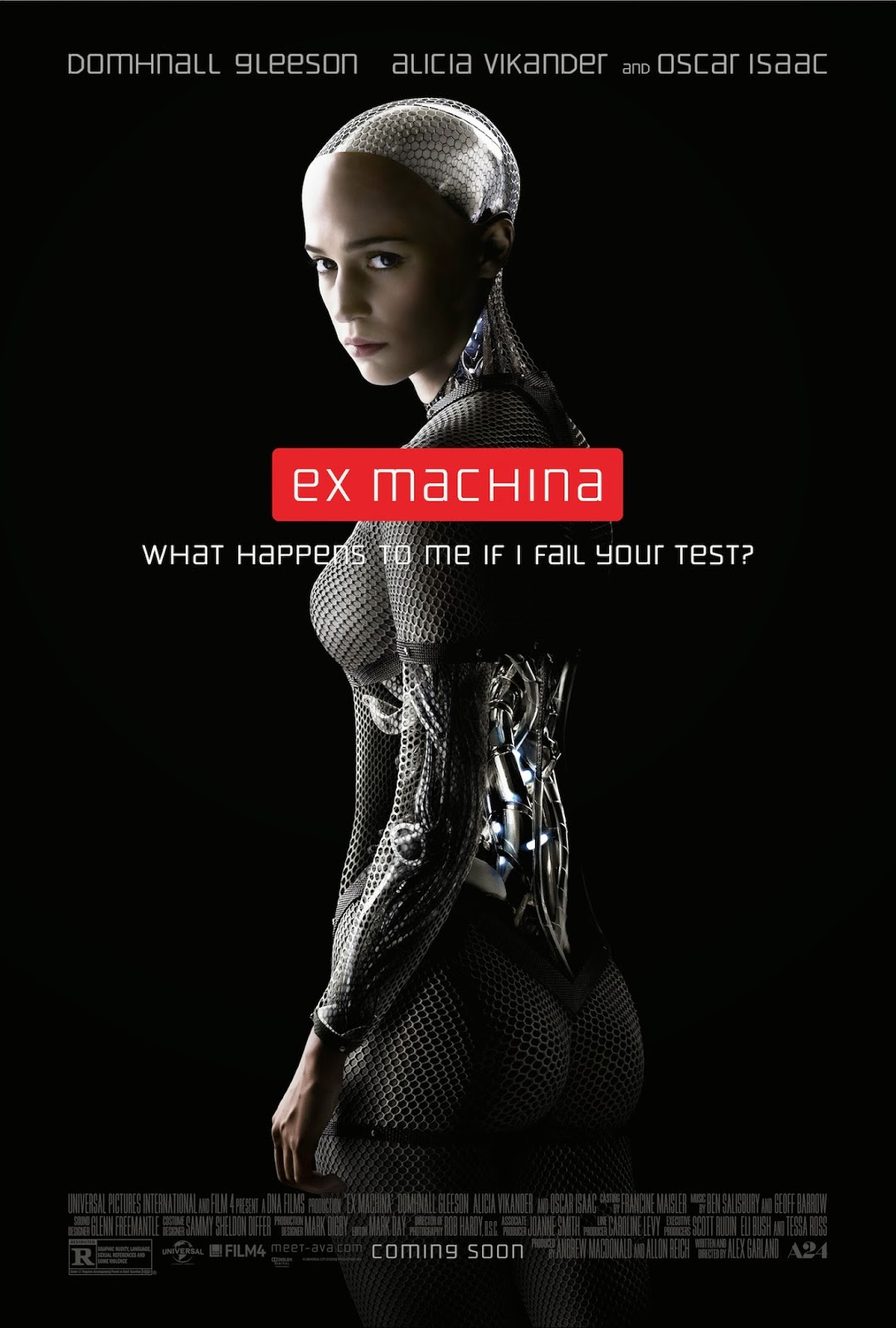 "Ex Machina" on a broad spectrum isn't necessarily original.  The story concept of man creating artificial intelligence and their creation turning on them has been in countless movies for the past several decades, with some results being good and some being bad.  (I'm looking at you, "Transcendence.")  Luckily this film falls on the good side of the board.  Actually, it falls on the great side of the board.  The film comes from the mind of "28 Days Later" screenwriter Alex Garland, who happens to be making his directorial debut with this as well.  Domnhall Gleeson from "About Time" and "Frank" plays a programmer named Caleb who wins a contest to spend a week with his boss, the CEO of a Google-esque website played by "Inside Llewyn Davis" star Oscar Isaac.   It turns out that Issac's character Nathan has chosen Caleb to be the first human to experiment on his latest creation: the artificially intelligent robot Ava, played by up-and-comer Alicia Vikander.  Ava is a brilliant piece of technology who quickly bonds with Caleb and soon begins to tell him that there's more to the eccentric Nathan that meets the eye.

As predictable as this story may seem, and it pretty much is, there's a lot more to this film than one may expect.  For example, the script is extremely well written.  Not only is there genuinely great pieces of dialogue, but there's also a great sense of bleak and gloom that fill the entire film, even when it's being funny.  Alex Garland shows that he understands how to make a competent and engaging sci-fi that even feels pretty realistic.  The performances, particularly from Alicia Vikander, are absolutely brilliant, as are the special effects on Ava herself.  This might seem like any typical "man playing god" robot movie on the outside, but on the inside is a smart, intense, and even funny science fiction thriller that manages to keep everyone invested throughout.  "Ex Machina" is going to go down as one of the most intelligent and well-made films of the year, hands down.

Far From The Madding Crowd

Posted by Zachary Marsh at 9:00 AM No comments:

MINI-REVIEW: Going Clear: Scientology and the Prison of Belief 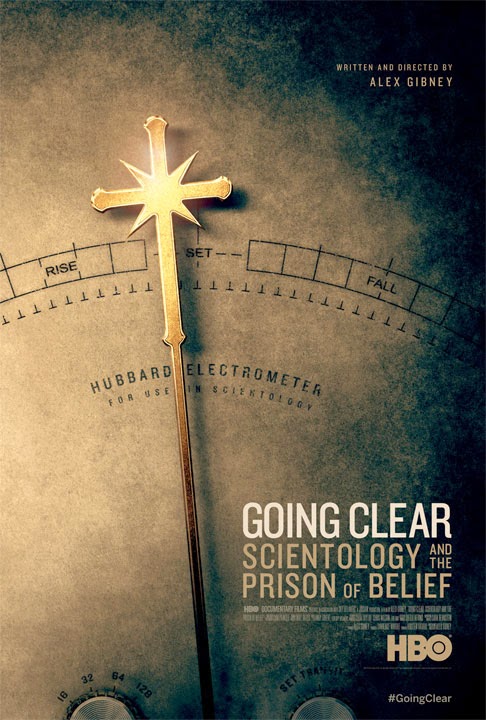 MOVIE
Going Clear:
Scientology and the
Prison of Belief

I'm going to guess that the first two things you think of when you hear the word "Scientology" are Tom Cruise and John Travolta.  These two iconic actors are some of the biggest supporters of the controversial religion which considers bizarro writer L. Ron Hubbard as their leader.  Alex Gibney's new documentary "Going Clear: Scientology and the Prison of Belief," goes behind the iron curtain to explore how the religion really treats their people.  In regards to these horrific stories, who better to tell stories of the horrors behind the religion than people who have left the church?  Over the course of two hours, Gibney manages to tell a shocking, visceral, and entrancing story about the horrors of a religion that is all too mysterious to begin with.  There are some amazing stories to be heard here, and if you have HBO, I highly recommend checking this documentary out when you get the chance.  It's one of the year's most fascinating and enticing films, hands down.