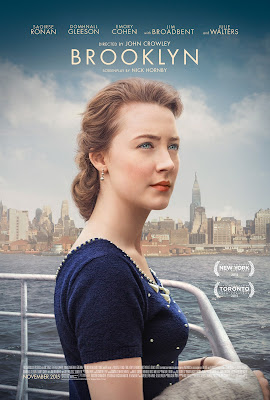 One of the hottest titles to come out of the 2015 Sundance Film Festival was John Crowley's "Brooklyn."  The movie stars Saoirse Ronan as a young Irish girl named Ellis who decides to immigrate to America and start up a new and hopefully more successful life.  Ellis initially feels homesick as most people would.  However, her sickness is immediately cured when an Italian man from Brooklyn named Tony, played by Emory Cohen, enters her life and becomes the center of her romantic infatuations.  From that brief plot description, it's easy to brush this off as yet another romantic film that caters to the hormone-injected teen girls of today.  Despite the film having typical romantic cliches that have been done time and time again, "Brooklyn" manages to stand out amongst other romantic tales coming out these days.  It does so by being an emotionally moving, fantastically acted, gorgeous looking, and overall downright charming drama that, while it's not perfect, is very much something that audiences everywhere can and will enjoy together.

Saoirse Ronan is an actress I've always enjoyed seeing in movies.  Whether it's playing a supporting role in "The Grand Budapest Hotel" or the title character in "Hanna," Ronan always gives it her all in her performances.  As Ellis, she not only gives a great performance, but she also shows off a rawer and more emotional side that was quite refreshing to watch.  Granted I haven't seen her Oscar-nominated work in "Atonement," so I can't judge off of that film.  Considering this is pretty much Ronan's film, though, I think it's safe to say that she held her own and gave a commanding and investing performance.

The first 30 minutes or so of the film show Ellis' struggle not only in America but her journey coming to America itself.  These scenes were all very good, but they didn't quite grab me as much as I would have preferred.  It wasn't until Emory Cohen's Tony came into the picture that the quality of the movie not only raised, but leaped high up in quality.  Not only does Cohen give an exceptionally likable and charismatic performance, but the chemistry that he has with Ronan is unbelievably charming.  Every time these two were on screen together, even if a scene was more dramatic than others, I had a big smile on my face because of how well these two got along.  Their romance never felt artificial or written, but rather as if we were watching a documentary about the sweetest couple around in 1950s New York City.  Their romance to me is the glue that kept the film as a whole together.

About halfway through the film, a tragedy occurs which causes Ellis to go back to Ireland.  Back in her native home, she meets another young man named Jim, played by Domnhall Gleeson.  The reason this film fell short for me from being fantastic is because of Gleeson's character.  Don't get me wrong, the performance is strong, and it's nice to see Gleeson in so many movies right now.  My problem with his character is that, frankly, he didn't feel integral to the plot whatsoever.  It seemed like his only purpose was to create a romantic conflict between Ellis and Tony, thus creating a love triangle.  I never once felt invested in him as a love interest, and I just felt that he was kind of unnecessary to the movie as a whole.  If the filmmakers wanted to create a conflict that would persuade Ellis into moving back to Ireland, they could have made up a better than excuse instead of relying on another romantic partner to seduce her.  Gleeson gave a solid performance, but his character didn't feel needed in my eyes.

"Brooklyn" isn't anything we haven't seen before regarding storytelling.  Not just because this type of story has been done countless times before, but also because this film is based on a book of the same name by author Colm Tóibín.  However, screenwriter/fellow author Nick Hornby gives the story more substance and creates likable and relatable characters that we as an audience care about and enjoy watching.  John Crowley animates the screenplay to life by helping his actors deliver great performances and showing a visually beautiful look at 1950s New York.  The second half felt too much like an artificially created conflict for Ellis, and Domnhall Gleeson's presence felt unneeded, but at the end of the day Brooklyn is a charming, well-acted, beautifully shot, and well-made film that is sure to be a crowd-pleaser to everyone who sees it.

Posted by Zachary Marsh at 3:44 PM No comments: 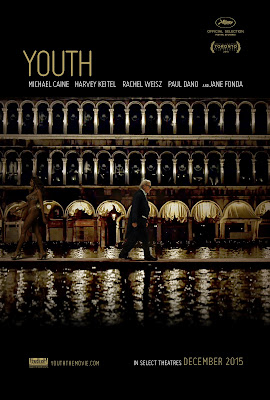 Films like Paolo Sorrentino's "Youth" are something of a reminder of living life to the fullest and accepting the inevitable truth: we are all going to grow up and die as time goes on.  Michael Caine's Fred Ballinger and Harvey Keitel's Mick Boyle are two longtime friends who decide to retreat to the Swiss Alps for some much-needed relaxation.  Ballinger's daughter/personal assistant Lena, played by Rachel Weisz, tags along with the two as well.  Fred is an acclaimed composer/conductor with no intention of getting back into the game due to "personal reasons," despite the Queen of England's request of having him perform for her.  Mick is a renowned filmmaker who brings his team of writers along with him to finish the screenplay for what he thinks will be his "last important film."  Lena is married to Mick's son though the relationship is on the fritz.  She resents her father and has a lot of emotions bottled up within in regards to the way he took care of her.  Actor Jimmy Tree, played by Paul Dano, is also staying at the hotel while he tries to prepare for his latest acting job.  Everyone at the hotel ends up reflecting on their lives in some way, shape or form, and it's in these reflections that the movie hits heights that I didn't expect it to hit.

It's easy to pass this off as nothing more than an "old people" movie due to its two leading men.  The film itself is so much more than that.  Sure the prime focuses are Caine and Keitel's characters, but the movie features many other characters, both old and young, who are in the Alps to relax and have some fun.  It isn't just about two older men looking to vacate and admire the life they've lived.  The movie, rather, is about how a group of people staying at a beautiful hotel in a beautiful part of the world find their ways of reclaiming their youthful spirits and feel, well, young.  Sorrentino captures this essence powerfully and delivers a superb film chock-full of laughs, drama, and well-crafted characters with precision and grace.

Veteran actors Caine and Keitel give two of the best performances of their decade-spanning career in this movie.  Not only do the two share some incredibly funny and very poignant scenes together, but their character arcs separately are very fleshed and have a lot more substance than one would expect.  One scene that stands out, in particular, involves a heated discussion between Caine's Henry Ballinger and a representative for the Queen of England.  On paper, it could seem that the emotions coming from the characters aren't very authentic, but the way Caine pulls off his performance in this scene allows the scene to work wonders and adds quite the amount of depth to his character.  Keitel's final scene in the movie is also quite poignant to encounter.  Without spoiling anything, both of these scenes are incredibly emotional and somewhat subtle, making the overall outcome of what happens in them stronger and more effective.  Another veteran actor, Jane Fonda, has a small role in the movie, and she too is very good in her bit part.  Having said that, the performance Fonda gives feels like nothing compared to the incredible work Caine and Keitel give here.

Two performances that aren't quite as great as the former two but still deserve mentioning are the ones given by Rachel Weisz and Paul Dano.  Weisz's portrayal of Ballinger's daughter Lena is raw and relatable.  In a sense, anyone could see themselves in her shoes because of her life getting washed down the drain.  Everybody knows what it feels like when it seems everything that could go wrong is going wrong, and yet the main source of all of this is unknown.  Paul Dano's Jimmy Tree is in a very similar spot actually, as he wants to venture off and become a more versatile actor but is only recognized by fans for playing a robot on a TV show.  Both characters on the outside may seem self-centered and unlikable, but as the movie goes on it's shown that they're complex characters with a lot more realism than the surface may show.

Aside from a couple of things not being explained well, mostly involving the final scene of the movie, as well as a rather horrible green screen effect used towards the end, there isn't anything else negative to say about Youth.  There are people out there who won't enjoy the film as much as I did, as there were people who booed the movie at its first screening at the Cannes Film Festival.  Some may even complain that it drags and it feels like something catered towards the 55+ crowd.  To me, this wasn't made solely for a specific age group: this is a movie for people who want to know how to "live" again.  Being cooped up in a room doing nothing but eating food and watching Netflix shows can get boring, and "Youth" is something of a reminder to get off your ass and live life to the fullest.  Another movie that came out this year, Noah Baumbach's "While We're Young," had this identical effect.  Although, I do feel like this film emulated this better.

Paolo Sorrentino has crafted one hell of a moving movie.  The acting is incredible, and the chemistry between Caine and Keitel makes a lot of the scenes they share work wonders.  The cinematography is stellar and so damn gorgeous to look at, especially when the camera focuses on these long shots of the mountains and scenery of the Alps.  Sorrentino's script is chock full of sharp humor and incredibly heartbreaking/poignant moments that make this hit closer to home than one may expect.  His direction as well gets the best performances out of his actors and gives him the ability to tell this great story with ease.  Fox Searchlight may be campaigning this for Awards Season this year, but it seems like their main focus is on John Crowley's "Brooklyn."  While "Brooklyn" is more digestible and is a very well made film on its own merits, "Youth" has more of a subtle and raw quality to it.  That, to me, makes it a much stronger and more impactful piece of work  It might not appeal to everyone, but to me, "Youth" is a wonderful look at people regaining their youthfulness while dealing with the fact that death and growing up is inevitable.

Posted by Zachary Marsh at 1:59 PM No comments: