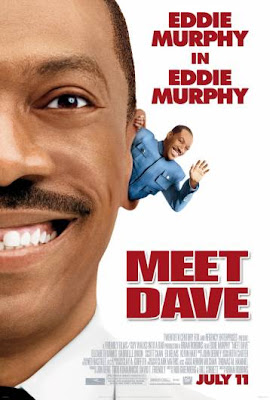 Meet Dave is a cute family film with alot of funny stuff that adults would enjoy. Meet Dave is about a spaceship thaty crashes to Earth which looks like a regular human being. But inside are hundreds of tiny people coming from their planet to get something. A few months earlier, a little rock falls from the sky and lands in a kids goldfish bowl. It then sucks all of the water out of the fishbowl. It turns out that he reason why this orb sucked up all of the water is because the aliens sent it to collect water from Earth so their planet can survive. Now, when the aliens are on Earth they start getting different feelings. Now, the aliens must get back to their planet with the stuff they need before it's too late. Meet Dave was an adorable, funny movie the whole family will enjoy. Trust me, go and rent Meet Dave and see what you think.
Posted by Zachary Marsh at 10:10 AM No comments: 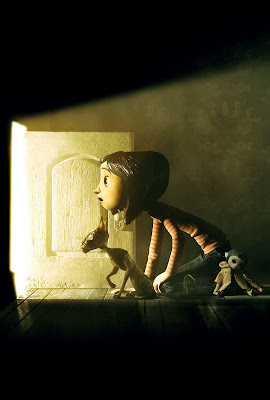 If there is any 3D movie that I wouldn't love it wouldn't be Coraline. Coraline is about an 11 year old girl named Coraline Jones who moves into an apartment building with her two parents. THe problem is, her parents are all caught up in work. Coraline then wishes to have a better life. Then one night when she is sound asleep, Coraline wakes up and follows a mouse to a door her mom unlocked earlier to find a brick wall. Once at the door, Coraline opens it to find a strange looking tunnel. Then, Coraline goes into the tunnel to find a world parallell to her own, but only better. Also, everyone in the other world has buttons for eyes. Then, the other mother says Coraline could stay in the other world forever, but Coraline would have to sew buttons to her eyes. The movie was a teriffic experience to see. Filled with humor, scariness, and 3D. Really, if you don't see it in 3D, you aren't getting it all. For me, it is Oscar worthy. Just a heads up, this movie has alot of scary stuff for little kids so if you have a kid 6 or under, don't take them to see this unless you want to take an eye-popping risk.
Posted by Zachary Marsh at 9:10 PM No comments: 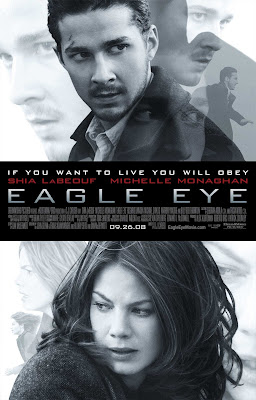 How do I put this? Eagle Eye is a breathtaking, heart-pounding, action packed thriller. Eagle Eye is about a slacker named Jerry Shaw who finds out his twin brother, Ethan died in a car accident. After that, he goes into his apartment to find packages filled with alot of dangerous weapons. As soon as he sees this, a woman calls him saying that the FBI is going to come and get him. Then, about a few seconds after that, the FBI does come and take him. Now we are focused on Rachel Holloman, a single mother who's son is going to preform with his school band in Washington D.C. Now we see Rachel getting a phone call from the unknown woman who tells her to look through the glass of a Mcdonalds window. She sees on a row of TVs her son at a McDonalds restaraunt. Now, the caller tells her to get into a car and start driving. Throughout the movie you find out incredible things like the unknown phone caller being a computer named Ariia, which Ethan Shaw created. I don't want to spoil anything else, but I want to get something straight, the movie was awsome. If you haven't seen it yet, try to rent it at a RedBox, Hollywood Video, or Blockbuster. Trust me, you better get ready for a rollar coaster ride cause once you turn it on, you can't turn it off. (Only if you get bored instantly)
Posted by Zachary Marsh at 11:42 PM No comments: