MINI-REVIEW: What We Do In The Shadows 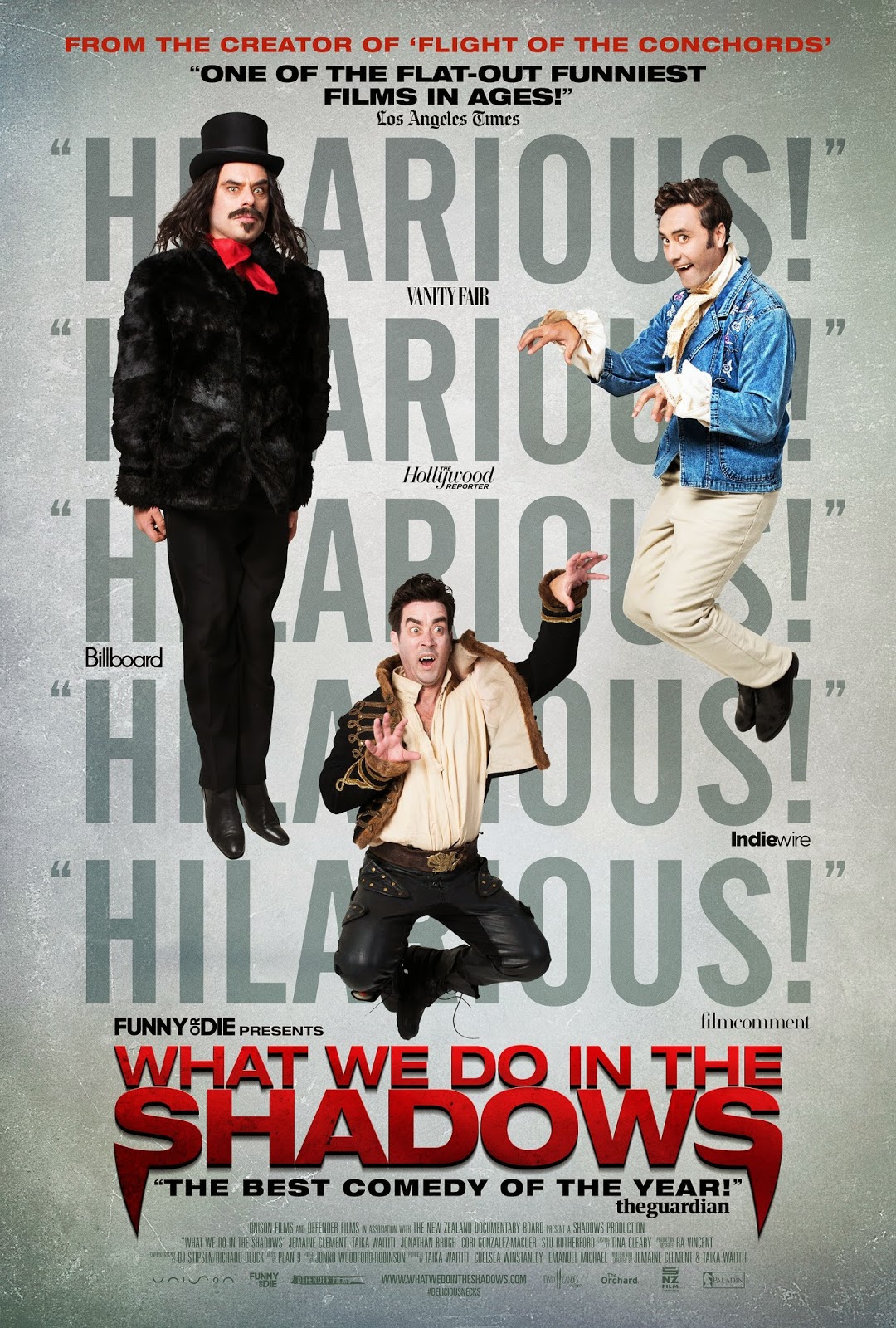 MOVIE
What We Do In The Shadows

From shows like "The Office" and "Parks & Recreation" to films like "Borat" and "This Is Spinal Tap," mockumentaries have been around for a long time and have been consistently entertaining people.  Not to mention, these types of projects have been vastly superior to the found-footage genre, despite there being some notable exceptions.  It's actually pretty brilliant that the writers/directors/stars of "What We Do In The Shadows," Taika Waititi and Jemaine Clement, decided to go on the mockumentary route here, as the found-footage genre I feel is starting to feel repetitious.  The film showcases the "real" lives of Viago, Deacon, and Vladislav, three centuries-old vampires struggling to live in modern times and dealing with modern problems like paying rent, finding food, and making due with their eternal lives.  What follows in the 85 minute duration of this film is a series of hysterically funny moments, some great tongue-in-cheek references, and overall entertaining characters who are just a pleasure to spend time with.  Seeing how this film is being backed by the comedy site "Funny or Die," I think it's pretty easy to tell that this isn't just any run-of-the-mill comedy.  Rather, it's an intelligent, witty, and downright hilarious comedy all the way through that I highly recommend to those who are looking for non-stop bellylaughs.


Posted by Zachary Marsh at 9:47 AM No comments: Links to this post 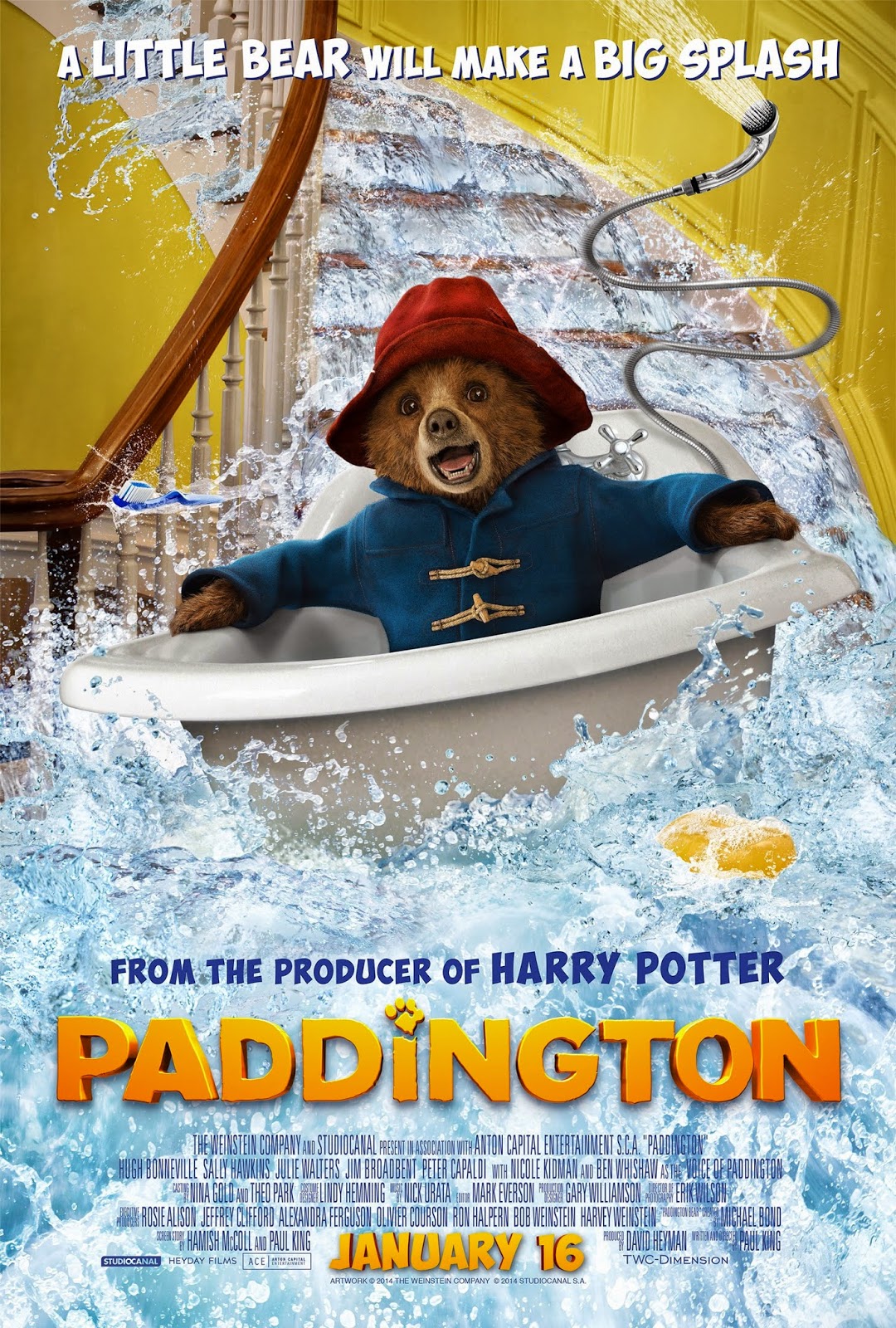 I'm not gonna lie: when I first saw the trailer for "Paddington," I didn't think it look good at all.  It seemed like a pointless adaptation of a character barely anyone from this generation has heard of with bathroom jokes galore.  Boy, am I glad that I was wrong on that.  Not only does this have little to no sexual, toilet, or crude humor, but it also has an engaging story featuring likable characters and an entertaining villain.  Plus, the film's brand of humor isn't just funny, but it also has an intelligence to it that seems to be paying homage to the films of Wes Anderson, particularly "Fantastic Mr. Fox."  I will admit that the predictability of the film was front and center, and some of the characters themselves seem to be on a single note at times, but it's really hard to deny that "Paddington" succeeds at being a harmless, charming, and even kind of dark family movie that kids and adults will enjoy.  Heck, maybe the adults will enjoy it more because they will get more of the jokes present here than the kids will.  I'm really happy that I listened to my gut and gave this film a shot, because now I can happily recommend this to those who want something intelligent and sweet for their children to see.


Posted by Zachary Marsh at 11:45 AM No comments: Links to this post 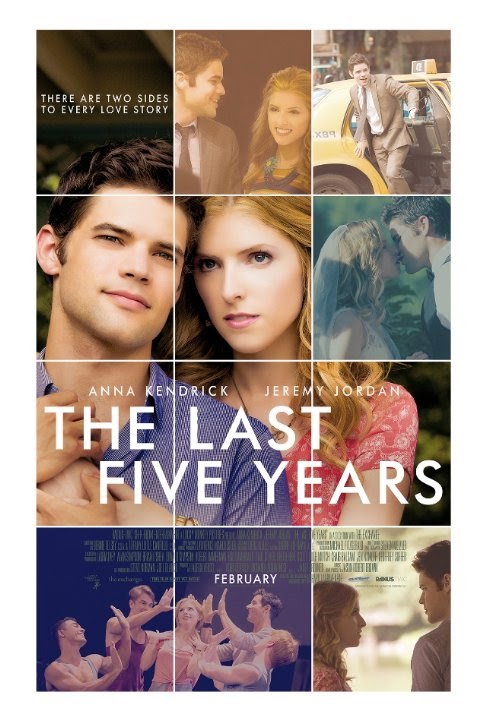 I'm always game for a musical that tries to do something new and ambitious, as long as their done to their fullest potential.  Having never actually seen any of the off-Broadway productions of "The Last Five Years," I can say that I was happily going in blind on it, aside from knowing how the show was structured and maybe one or two of the songs.  The film, adapted to the screen by Richard LaGravenese, showcases the five year relationship between Anna Kendrick's Cathy and Jeremy Jordan's Jamie, however the way it's presented is a lot more unique than one would expect.  In homage to the musical from Jason Robert Brown, the film starts off by showing the perspective of Cathy when she and Jamie have broken up.  Jamie's story, on the other hand, begins at the start of the relationship.  Jamie's story is then told chronologically while Catchy's is told in reverse order, so at the end of the film it's Jamie who's at the end and Cathy who's at the beginning.  As creative as this is, I actually think this worked to the film's disadvantage, personally.

While we see both sides of the relationship at different times, I never really got the sense that we as an audience could pinpoint the moment where the relationship started crumbling.  We do get a scene showing one of the characters finding another significant person to love, but that's about it.  Not to mention, as a narrative it never exactly felt like we got to spend enough time with these characters in order to relate and empathize with them.  It just felt like screenwriter/director LaGravenese was trying to be so much like the musical that he forgot to add a few more scenes of exposition and dialogue to give us more bang for our buck.  Not to mention, this movie was surprisingly fast paced, and I don't see that as a good thing.  We never got to feel the length of the "relationship" at any moment, so it just felt like song after song that jump all through their five year relationship until the credits began.  Before I get any more into this topic, let me just clarify that I did indeed enjoy "The Last Five Years" overall.

Anna Kendrick and Jeremy Jordan are absolutely superb here as the only two significant cast members in the film.  When the scenes call for them to be happy and in love, they are convincingly great together as a couple.  And when the film call for them to have their relationship be crumbling apart, they capture the hardships couples can go through almost perfectly from what I've seen before.  Kendrick in particular has this sex appeal to her that makes her more engaging and fierce, and her overly-theatrical musical sequences all the more entertaining to watch.  Jordan also showcases a likability to him that will make the ladies swoon for him.  Not to mention, in their final scene in the film, both characters sing a duet that shows both the ups and downs featured in the movie in a bitter-sweet way.  If it weren't them in the designated roles, I'm not sure how effective the scene, along with the rest of the film, would have been.

For those who have seen the original musical, it should be noted that almost, if not all of the songs are included in this film adaptation.  Being new to the music, I must say that nearly every single song number is catchy, mood-setting, and help to tell the overall story going on.  My personal favorite song was a song called "Shiksa Goddess" where Jamie talks about his love for Cathy, a non-Jewish woman.  Other highlights on the soundtrack include "A Summer in Ohio," a song where Cathy sings about her, well, Summer in Ohio, and the film's finale number "Goodbye Until Tomorrow/I Could Never Rescue You," which I won't fully explain here.  Overall, I highly doubt people will be disappointed by the quality of the soundtrack.  If anything, this might be the one positive thing many people who are negative towards the film will take away from it as a whole.

At the end of the day, I will admit that I enjoyed myself during "The Last Five Years."  The acting is great, and the songs are catchy too.  Could writer/director LaGravenese have added a couple more scenes to give us more time to connect and spend time with Cathy and Jamie?  I believe so.  Could the scenes that are in the film have been dragged out a bit in order to give us time to feel like we're watching a five-year relationship unfold?  Absolutely.  Unfortunately, that's not what we have here, but overall I had fun with the movie and was tapping my foot during some of the musical numbers.  If you want to see a well-made, musically pleasing, and well acted Broadway adaptation, then I do recommend "The Last Five Years," though you may come out of it wanting more from what was given.


Posted by Zachary Marsh at 1:00 PM No comments: Links to this post 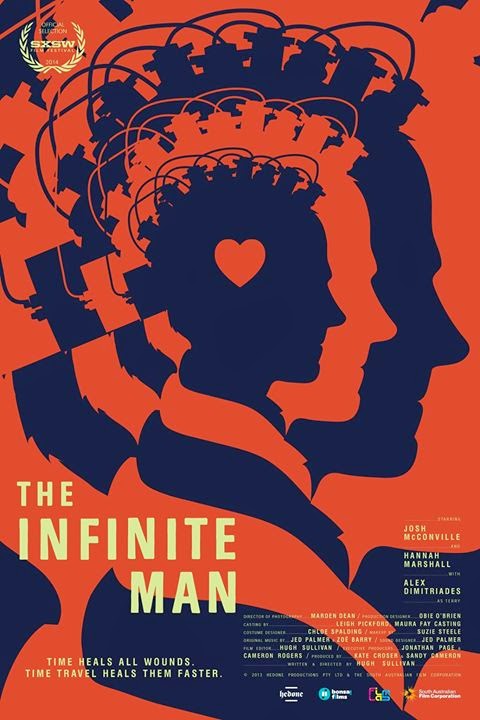 Sometimes, the best sci-fi stories don't require intellectual ideas or boatloads of special effects.  With "The Infinite Man," the thing that drives this sci-fi story is actually a man trying to redo a vacation with his girlfriend that would end up ruining their relationship altogether.  This man is played by Josh McConville, and he is one of only three cast members featured in the film.  Without spoiling anything, this movie takes several turns into very surreal, strange, and sometimes funny directions, all leading up to an ending that is bitter-sweet to say the least.  I highly doubt anyone outside of those who attended certain festivals where this was playing would have heard of this film, but this is definitely something that people should look out for.  Does it have its problems and inconsistencies involving its time travel aspect?  Absolutely.  Does that change my overall feelings on the movie?  Not at all.  If you're looking for a quirky, off-beat, and creative sci-fi love story, then I recommend looking out for this little treat from down under if it ever comes to your area.  If it doesn't, then definitely look out for it when it eventually is released on DVD, Blu-Ray, and/or VOD here in the States.


Posted by Zachary Marsh at 12:00 PM No comments: Links to this post

MINI-REVIEW: The Woman in Black 2: Angel of Death 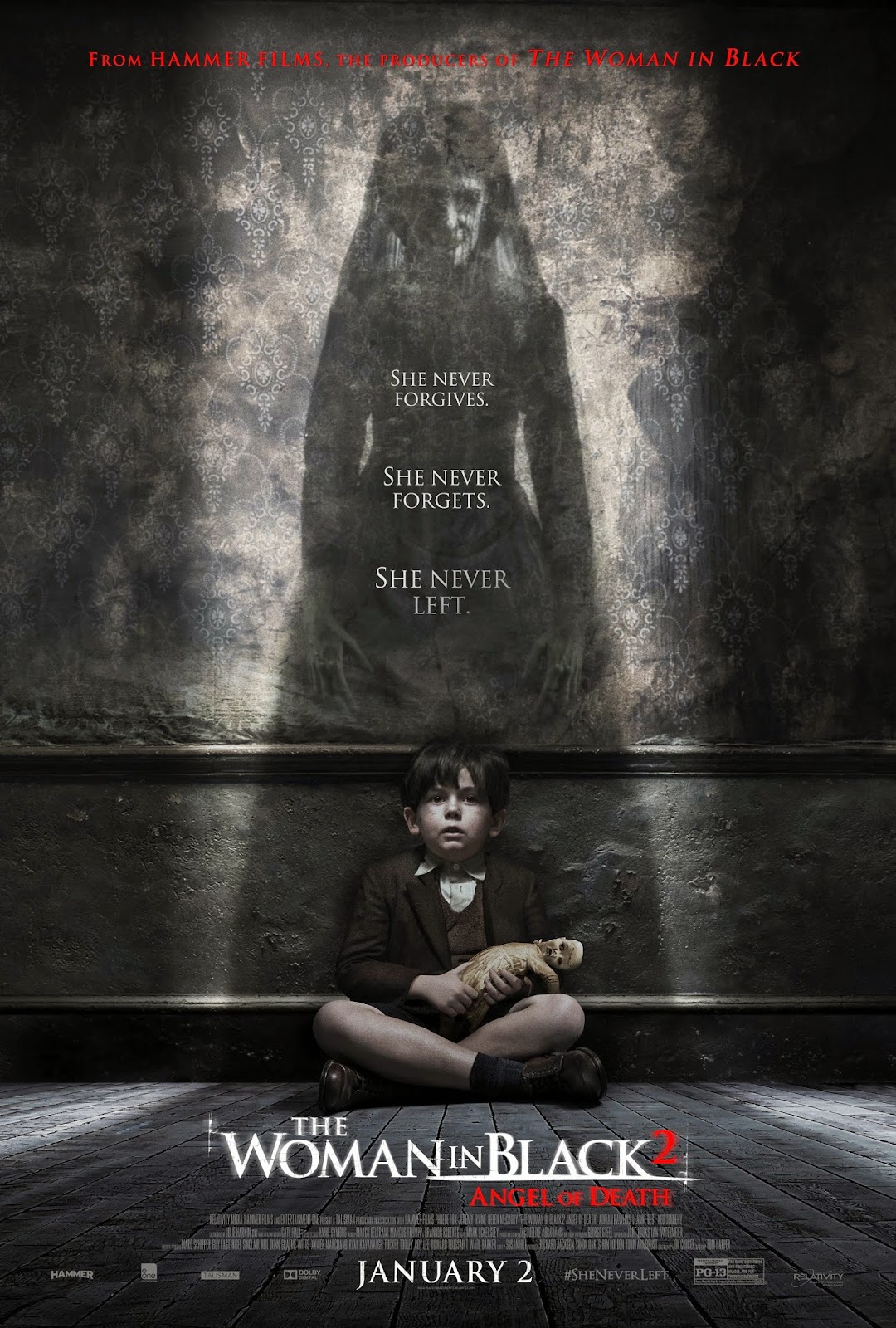 MOVIE
The Woman in Black 2:
Angel of Death

The beginning of every year usually delivers a mediocre horror film of some type, and 2015 has continued this ongoing tradition.  This year's mediocre film comes in the form of the unnecessary sequel "The Woman in Black 2: Angel of Death."  The film takes place about 40 years after the events of the first one, and this time around the Eel Marsh house is being used as a refugee for English kids during World War II.  Of course supernatural occurrences ensue, and with that is an abundance of meaningless and cheap jump scares.  Not to mention, a predictable story with cliched characters and laughable predicaments come with this mediocre film as well.  Sure some of the stuff is a intriguing, and the film itself isn't unwatchable, but at the end of the day this is just a run of the mill horror sequel that was merely made as a quick cash grab.  No true substance or style here, just pure genericness.


Posted by Zachary Marsh at 5:25 PM No comments: Links to this post