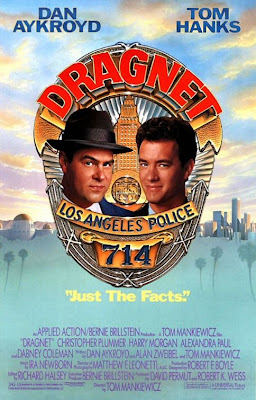 If you love Dan Aykroyd and Tom Hanks, you'll love Dragnet, which is a parody/homage to the original cop series in the 1950s. Dragnet tells the story of two cops who must solve the mystery of this voodoo clan with the name P.A.G.A.N. that sacrifices virgins (yes, REAL virgins). This movie is laugh out loud funny with sexual humor and Tom Hanks before his Oscar nominations. Dan Aykroyd does a stellar job of providing seriously funny parts as the nephew of the original cop from the original show. But what also makes this movie worth while is that they turned a dramatic TV show into a hilarious movie that tributes and parodies the 50s show. But warning to all that see it: since it was the 80s when this was released, its PG-13 rating could go to a light R for nudity on mostly women on the top, never the bottom, although it's suppose to be for a comedic effect. Also, there is (SPOILER) a character in the movie named" The Virgin Connie Swail", where they always call her that until the last scenes of the film. (END OF SPOILER) But still, if you're looking for a boat load of laughs, Dragnet will keep you laughing until it hurts, literally.
Posted by Zachary Marsh at 9:04 PM No comments: 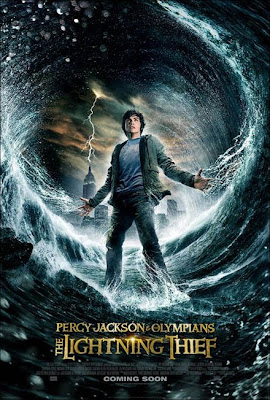 If you enjoy the Harry Potter, Narnia, or Lord Of The Rings series', then get ready because Percy Jackson is coming your way. This movie was very entertaining, very funny, and mostly just very FUN. I especially admire Brandon T. Jackson's portrayal of Grover, Percy's best friend. He was probably the BEST part of the entire film because he made every scene he was in funny and charming. I also enjoyed the strong, all star supporting cast including Pierce Brosnan (James Bond), Uma Thurman (My Super Ex Girlfriend), Steve Coogan (Night At The Museum), and so many others that make this film great. Although, if your planning to take the younger kids to see this movie, it's not appropriate for them due to its mythical and scary creatures, sexual content, and its storyline. Also, if your a big fan of the book series, you might be shocked and disappointed to see that they cut out some major parts of the book like (SPOILER) Ares, Seattle, and many other key parts of the book. But anyway, this is a fun film that the whole family will enjoy, plus have some adult humor in it. Oh by the way, if you do see this movie, stay after the credits for a little surprise you'll enjoy. And also, I think Chris Columbus, whose directed such films like Home Alone, Mrs. Doubtfire, and the first two Harry Potter films did a great job at showing us his vison of Percy Jackson's world. I surely can't wait for the sequels to come for the series. I will surely be buying this on iTunes and/or Blu-Ray when it comes out, since this movie is indeed a theater or high definition experience. I can surely tell you that people won't be disappointed by this film. So what I'm saying is, go and see Percy Jackson & The Olympians: The Lighning Thief. It's worth the money and popcorn, believe me.

SYNOPSIS (taken from Fandango.com):
Trouble-prone teen Percy Jackson is about to be kicked out school -- but that's the least of his problems. The gods of Mount Olympus and assorted monsters seem to have walked out of the pages of Percy's Greek mythology texts and into his life and they're not happy. Zeus' lightning bolt has been stolen, and Percy is the prime suspect. Now, Percy and his friends must embark on a cross-country adventure to catch the true thief, save Percy's family, and unravel a mystery more powerful than the gods themselves.

Diary Of A Wimpy Kid

Marmaduke
Posted by Zachary Marsh at 11:08 PM No comments: 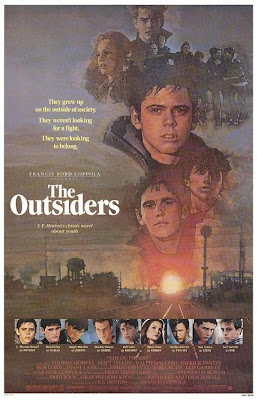 I never thought that I could be so disappointed in a movie like I did with The Outsiders. This movie went by so fast I couldn't even tell what was even going on during each scene. I had high hopes for this movie, because I read the book for school and was intrigued by it. This could possibly be one of the worst movies that I've ever seen. Yes, in my life! The Outsiders tells the story of two greasers that run away from home and encounter many events as they are gone in 1966. After my group and myself were finished reading the book, we were told to watch this movie and write a report on the difference between the movie and the book. And like I said previously, the book is SO much better than this trashy adaptation. The reason for that is because they totally rushed through the book to make a movie out of it. This movie is only an hour and a half, so it feels like they took the entire book and sped through it faster than a runaway train. They could have at least made this movie about 40 minutes longer to slow the movie down a little. Francis Ford Copolla has certainly made a g-d awful movie that will disappoint anyone that's read the book. I never saw the critically acclaimed movie, The Godfather, but I know it's much more superior than this movie. I also hate the fact that they had to cast many celebrities like Tom Cruise, Matt Dillon, and many others. The only right casting move was Patrick Swayze as Darry, who's the only solid performer in the entire film. Other than that, The Outsiders is the worst book to film adaptation I've ever seen. I'd be over exaggerating to say to burn every copy in existence of this movie, but that's how I feel. So if you want to see a disappointing film adaptation of a fantastic book, then you may want to check this crap out. This movie is the fast food adaptation of a great book. The worst part is is that it NEVER slows down!
Posted by Zachary Marsh at 6:18 PM No comments: 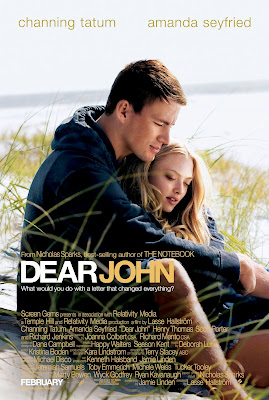 Although sad, predictable, and a total chick-flick, Dear John is a movie that will entertain, but not the male kind of audience. Dear John tells the love story of two people, one a college student and the other a soldier working for the military. They develop a relationship through letters they write to eachother, hence the title. But will the relationship stay forever? Like I said before, this is a 100% chick flick with dashes of war put into it. It is also a very sad movie if you guys out there are taking your girlfriends. But I do want to point out that (SPOILER) John does not get killed in the movie, though it may seem that way at the beginning of the film. Guys who love chick flicks, Channing Tatum, or Amanda Seyfried may enjoy this film. But if you guys don't like chick-flicks, you certainly should avoid this surprise hit. About 80% of men wouldn't want to seeBut if you girls out there are arguing to see this or Valentine's Day, go see this film because it is worth every penny you paid. But if I were you girls, avoid both of the films and rent them when they come to DVD or Blu-Ray. But if you see it, you'll see why Dear John defeated Avatar at the #1 spot, which it held for seven straight weekends. But still, if you're looking for a date movie to see, go see Dear John and you'll see why it's better than an all star cast on Valentine's Day.

She's Out Of My League

Tyler Perry's Why Did I Get Married, Too?

The Last Song
Posted by Zachary Marsh at 3:22 PM No comments: