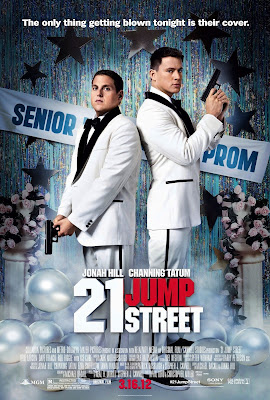 As Nick Offerman says as he's transferring Jonah Hill and Channing Tatum's characters to 21 Jump Street in the adaptation of the classic 80s TV show, there's no originality left in the business and people just keep rehashing old material.  '21 Jump Street' stars skinny Jonah Hill and Channing Tatum as two polar opposites who become friends while in police academy. After graduation, they are benchmarked as park cops and have no feeling of being important. After a failed attempt at arresting a group of drug dealers due to not knowing what the Miranda Rights are, they are soon transferred to the 21 Jump Street division, where they go undercover as high school students in order to find the dealers and suppliers of a drug that's spreading around the school.  I was one of the few people that was actually looking forward to this movie, with my thoughts of it looking like a decent R rated comedy that would be like 'The Other Guys.'   I, however did not expect the movie to be flat out hilarious.  I could be saying that just because I'm an immature 15 year old with barely any experience in R-rated raunchy comedies.  However judging from the 86% on Rotten Tomatoes, I think it's safe to say that this is a really funny movie.

Jonah Hill and Channing Tatum spark pure electricity in their chemistry on screen.  The two of them together make one hell of a funny combo.  Brie Larson and Ice Cube are among the many fantastic supporting players in this movie, making the portrayal of modern high school as accurate as possible.  Yes, that does include the bucket load of sex jokes and f-bombs.  It's funny that the directors of this movie directed the fantastic 'Cloudy With a Chance of Meatballs' and made the exact opposite type of film, yet it was still entertaining.  It's been out in theaters for nearly three weeks, but that shouldn't stop anyone from going to see this movie.  If you are of age to see this, then check out '21 Jump Street' as soon as you can.  Even the surprise cameo will have you laughing your ass off.  It reminded me a lot of the special cameo in 'Zombieland' which I still won't spoil after three years.  I promise you that you will be howling in your seats by the time the film ends with a door open for an upcoming sequel.