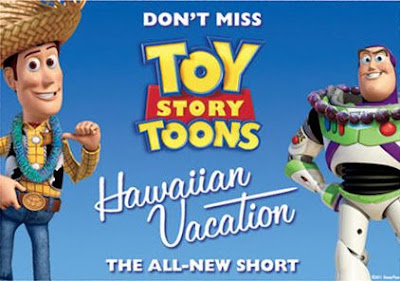 Whoever saw Toy Story 3 last year can clearly point out that the best characters in the movie were Barbie and Ken. Every time they were on screen, I could barely keep my laughter in, because they we just so damn funny! Now it's a year later, and Pixar is all out of original ideas for their world famous animated shorts. So their only option, aside from doing another Mater short, is to create an all new short based off of other movies they made. In this case, they chose Toy Story for their subject, and the idea that the toys want to create a Hawaiian Vacation for Barbie and Ken after they are left home. This is far from being as memerable as Day & Night or For The Birds, but I can assure you that even if you hate Cars 2, you can still rely on this short to provide you with all of the laughs you can need. This short was pure magic in my eyes, because I love revisiting the Toy Story characters and seeing how they've been. This short will make you laugh out loud in your seat throughout. The best part about it is that the entire audience will be laughing out loud along with you. Imagine an entire chorus of 300 people just laughing all around you. If your theater is big enough, that's what you'll be experiencing when you see Cars 2. So even if you don't enjoy Cars 2, you can still fall back on the pure comedy that is in Hawaiian Vacation.

Posted by Zachary Marsh at 9:23 PM