REVIEW: Man on a Ledge 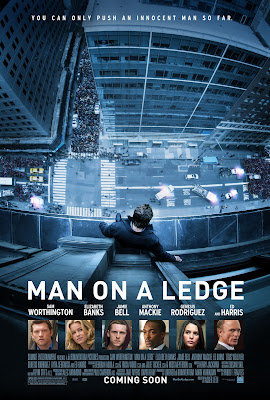 MOVIE
Man on a Ledge

An action thriller in January is never really a good sign, because it seems that the studio wants to put something less than great out there to start off the year. In some ways, that is the case with Summit Entertainment, who is releasing a new action thriller called 'Man on a Ledge.' 'Man on a Ledge' has a great cast, including 'Avatar' star Sam Worthington, 'Billy Elliot'/'Tintin' himself Jamie Bell, and Academy Award winner Ed Harris. The trailer for the film was interesting, but not mind-blowing by any means. Actually, I probably wouldn't have seen the movie in the first place if I didn't get invited to a screening of it. Was I expecting a lot from this film? No. However did I want to see something much better than what I did see? Yeah! Sure the plot is interesting and the cast is fine, but the movie gets so ridiculous and farfetched that it took me out of what could have been a spectacular January movie. Still, this is a great film for a January release. If this was released in say April or May, then this would be a huge disappointment among almost anybody who goes to see it. 'Man on a Ledge' could have been so much more, but it was a fun ride nonetheless.

The movie is about a guy named Nick Cassidy who about two years ago was accused and found guilty of stealing a $40 million dollar diamond belonging to millionaire David Englander. Flash to a month before the movie takes place, and Cassidy escapes from custody and cannot be found. Now he decides to attempt suicide by coming out onto the ledge of some hotel in NYC. As it turns out, Cassidy is trying to prove himself innocent of the crime that was committed, so his brother is trying to break into Englander's private jewel stash to steal the diamond and prove that Cassidy is an innocent man.

Some of the cast were actually pretty good. The others were, well... meh. Sam Worthington surprisingly is very good in this movie. Worthington's Nick Cassidy is one of those people who you are behind the whole way through even when things don't exactly go his way. Elizabeth Banks is also good, but to be honest her role could have been played by anyone and it would've been just the same. In fact, all of the women in this film, including Kyra Sedgwick who is in this movie for no reason at all, are replaceable parts and could have been played by anyone walking on the street looking for an acting job. How Sexist! As for everyone else, Anthony Mackie is the movie's best actor in which he plays a character who you don't know whether or not he's a bad guy. Mackie is a guy to really look out for in the coming years, with his two 2011 roles in 'The Adjustment Bureau' and 'Real Steel' to be absolutely great. Still, his role in this film is his weakest one so far. As for Harris, he is good in it, but his character is the vaguest person in the entire film. What I mean by that is that he is a character who you don't know much about yet seems to have a lot of power. Nothing about is character is really explained, other than the fact that he set up Cassidy. I blame the writer of the film for the flaws of the characters.

This is the type of movie where a lot of back stories can actually improve on some of the film's quality. In this case, only about 5 minutes of the film is back story. All we know is that Cassidy escaped from prison after stealing this mysterious diamond, and that his father is dead and he attended the funeral before he escapes. This actually is shown to us within the first 10 minutes of the movie, so there are no spoilers here. After that, we gain no new information at all, rather the same info given with some comedic blots stamped into every other scene. In fact I wouldn't even call this movie a thriller at all. It's more like an action heist film with comedy thrown into it every other scene.

I saw a lot of the movie 'Tower Heist' in this film, but that was aimed to be a comedy, while this wasn't. Some of the jokes were funny, (got to love a "Where did you learn to fight: Jersey?" joke) but they soon got annoying and they took away from the whole action thriller aspect that the film was advertised as. Also, you never find out in the 102 minute running time why exactly Ed Harris set up Sam Worthington for stealing the diamond. Did they work together in the past? Were they old buddies who betrayed each other? You never find out at all. The small things like that would've made this movie 10 times more interesting. Nothing in this movie is very realistic. Hell, you wouldn't even be able to hear Sam Worthington shouting from the rooftop 20 stories above. It's just logic.

The movie starts to defy the laws of gravity and injury when Sam Worthington starts jumping from one building to another in order to escape the bad guys. If this movie was more realistic and less like a comedy, then the star rating would've bounced up a half or one star. For now, this is just the typical January release that is nothing special at all. The cast was okay, the story was dumb but interesting at parts, and the script was clichéd, unrealistic, and too comedic. If you want to see a stupid action comedy film on a Saturday or Sunday morning, then this is the perfect film to see. However if you are looking for something much more than anything I just said, then this is not the right film for you. 'Man on a Ledge' is fun at times, but overall it is a disappointing movie that will soon be forgotten by the time everything else starts coming onto the scene.

Posted by Zachary Marsh at 1:30 AM