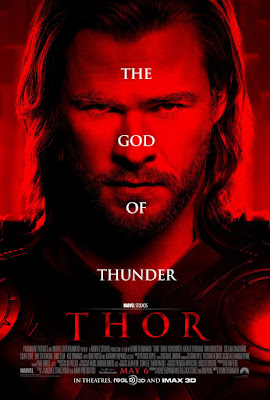 I wasn't sure what to expect from Thor. To me, the previews made the movie look like a superhero movie that no one has ever seen before. This could have been either a fantastic superhero movie, like Iron Man, or a mediocre turnout, like both Fantastic Four movies. Still, this is a Marvel movie with an awesome cast, so there was really no choice for me not to see this movie. Luckily, the final turnout was a superhero movie that had great acting, awesome visual effects, and great references to the rest of the Marvel universe. This movie, along with the Iron Man movies and this summer's Captain America are all leading up to the much anticipated Avengers movie next year. Though I didn't enjoy this as much as I enjoyed the Iron Man movies, Thor is still an enjoyable start for the summer movie season, and only appetizes our superhero taste buds before The Avengers is released next year.

Arrogant yet wise, Thor is next in line to succeed his father, the all mighty Odin. However on the day he was to be crowned, Thor reacts when the Frost Giants (corny name, right?) are supposedly attempting to reclaim their power that Odin once took from them centuries before. As punishment for starting up an unwanted war, Thor is banished to Earth, with his only way of reclaiming power is pulling his hammer out of a magical stone, which will only be released when one truly earns the power of Thor. At the same time, Thor's mischievous brother Loki is planning on destroying Thor, Odin, and the rest of the universe once he becomes Odin's successor.

The Marvel movies always have never been superior before Iron Man. They released many duds like Daredevil, Fantastic Four, and Spider Man 3. Though once Marvel took filmmaking into their own hands, the pre Avenger series was born. Even when I had my doubts about Thor before it was released, I still had a feeling that Marvel would continue to surprise its audience with fantastic movies. Well, only if you count X-Men Origins: Wolverine as being an exception to this, which i personally don't. The casting in this movie was pitch perfect. In case you didn't recognize Chris Hemsworth, who plays Thor in this movie, he played Kirk's father in the opening 10 minutes of 2009's Star Trek. He was funny, charming, and quite an awesome action star. He brought life into this somewhat unknown Marvel character and made it his, something that Tobey Maguire did in the Spider-Man movies. He also has the same charm and charisma that Star Trek co-star Chris Pine had when he played Kirk. I see this guy becoming a huge star, and I can't wait to see him again when The Avengers comes out next year.

The other cast members, including recent Academy Award winner Natalie Portman and the legendary Anthony Hopkins play their parts with power. What that means is that they played their parts perfectly. The other main newcomer in this movie is Tom Hiddleson, who plays the mischievous Loki. He is the second best character in this movie, behind Thor of course. You could feel the pain and anger that he had throughout the movie, so in some ways you felt sorry for him. At the same time however, you also wanted to see Thor kick his evil ass into hell, if there is even one in that movie universe. That's how I like movie villains to be: a person who you can both hate and care for dearly. The supporting cast members in this movie are what give this movie the final kick to be great.

Thor has been released in a post-converted 3D version, which I happened to get to see. While the 3D was good, it really wasn't necessary for this type of movie, due to almost half of the movie being just talking between characters. Yes I can admit that the action scenes looked pretty awesome in 3D. But that was the only thing cool about the 3D: the action sequences. However, the 3D in this movie was one of the best post-conversions that I've ever seen.

The movie was made to be a good superhero movie, yet was also made to have very corny subplots and dumb characters. The corniest thing about this movie was the fact that it had villains that were known as "Frost Giants." I understand that they were the actual name of the characters back in the comics, but Marvel could have at least given them a more interesting name instead of making them sound like they're from a little kids show. I also felt that they weren't advertised very much, even though they were some of the movie's main villains. Other than the Frost Giants, there were also Thor's three best buddies, who helped steal a dash of comedic flare out of Thor's persona. They were funny, but they could have been a bit more serious than they seemed. But hey it's a Marvel movie, so you know that the movie will be dumb at times.

It may not be my favorite superhero movie of all time, Thor is still a worthwhile movie that is pure fun and nothing more. It has everything you'd want and expect in a typical superhero movie. Actually, it has everything you'd want in a Marvel movie, since DC movies usually tend to be much darker. This has the comedy of Iron Man, and the action of The Incredible Hulk. With those two elements combined with the norse g-d in this movie, you know that you're seeing a really good movie. I'd recommend anyone who loves a good summer movie to see this movie.

Pirates Of The Caribbean:
On Stranger Tides

Posted by Zachary Marsh at 6:00 PM