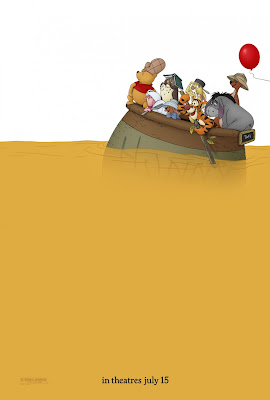 Aw that silly old bear from the Hundred Acre Woods is back on the big screen for the first time in six years. Pooh and his gang have been resurrected from the Disney Channel graveyard by directors Steven Anderson, of Meet the Robinsons fame, and Don Hill and given the hand drawn 2D animation treatment once more to tell us a brand new story. I've grown up with Pooh, Tigger, and the rest of the gang, so just the thought of being able to see them on the big screen gave my inner 5 year old self some pure joy. After the trailer was released, I was completely sold on the film, since it just looked like pure fun. After seeing the film, I must say that both my 5 year old self and my 14 year old self are completely satisfied by what our eyes saw. Winnie the Pooh is the best family movie out there, possibly the best family movie of the year so far.

In a time where people have to rely on fart and bathroom jokes to get a good laugh, this movie abandons that and gives the audience the most innocent movie to come out in the past 6 years. Even if you're an adult, you should go see this movie, despite the film only being 63 minutes long. This film will give adults a flashback to when they were kids and possibly watching Winnie the Pooh or playing with G.I. Joe's/Barbie's. I was watching a couple of little kids in the row in front of me jumping up and down and getting excited when the movie started. I talked to the family after the movie, and found out that it was the kids' first movie. I was surprisingly not annoyed by it, because I saw myself as a kid, getting all excited when Pooh or Rugrats would be on TV. That's why people should see this movie.

Even if there are little kids there to see the movie, you have to remember that it may be their first time seeing a movie in theaters. That alone should make you smile. The characters in this movie are funny, the jokes are very clever, and there's nothing that will scar the kids for life. I guarantee you now that this will be the very first movie for my kids to see, because there's nothing to be afraid of, both kids and adults. Parents won't be offended by anything or be tempted to walk out of the theater, plus get a few laughs in there. An added benefit is that the film is only 53 minutes without credits, so kids won't be as antsy when they get out of the theater as they would in some other kids movie out there. For the kids and kids at heart, Winnie the Pooh is the must see family film of the summer. Oh and here's some quick food for thought: what do you think Pooh puts in his "hunny" that makes it so divine? I think weed, but I want to hear your thoughts, so put your ideas in the comments section below. And as always, keep bloggin' nerds!


Alvin and the Chipminks:
Chipwrecked


Chimpanzee
Posted by Zachary Marsh at 1:21 AM