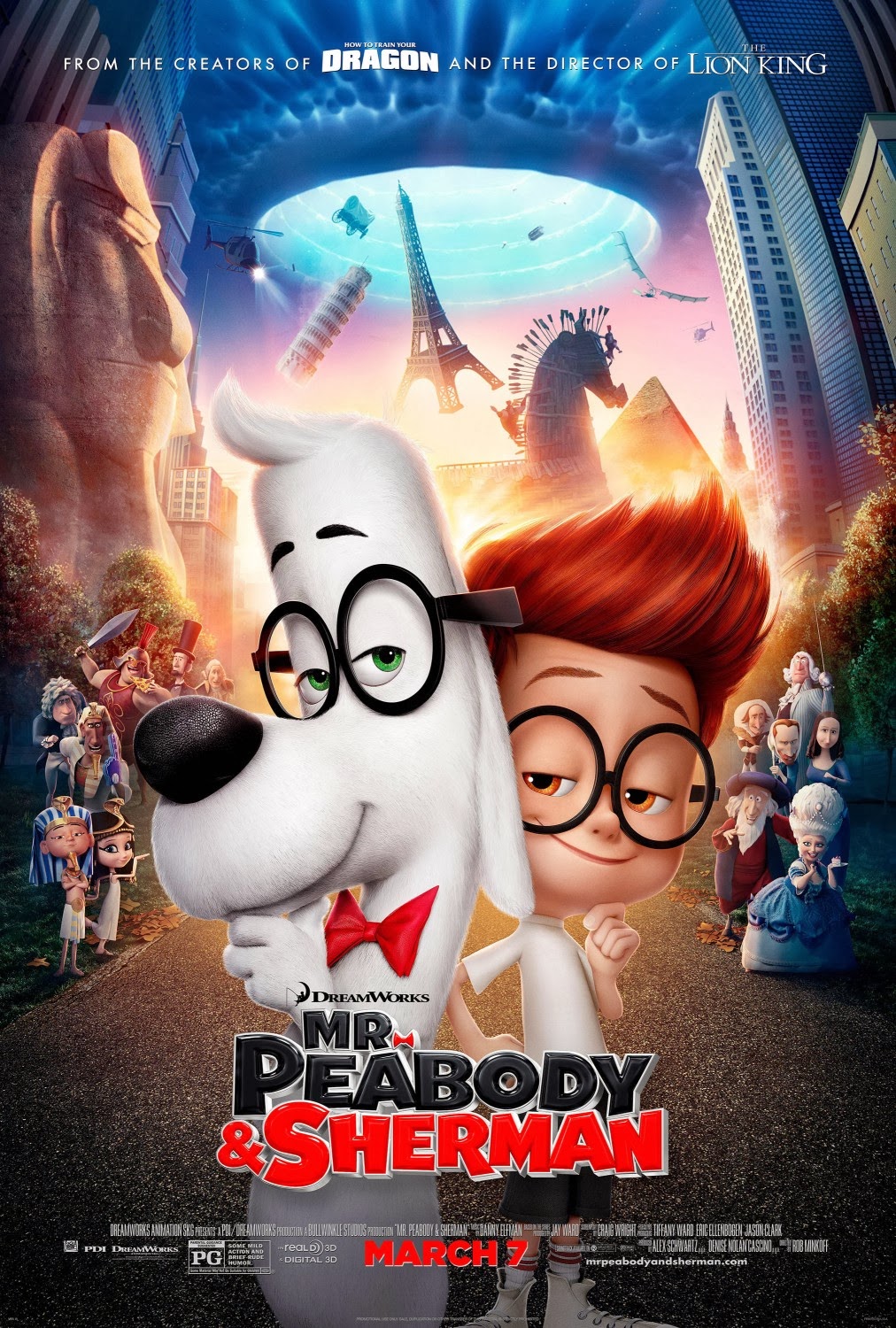 While "The Lego Movie" was funnier and more original, "Mr. Peabody & Sherman" had more heart in it and served as a great history lesson for young kids.  Based on the Peabody segments from the "Rocky & Bullwinkle" TV show from the 60s, this film tells the story of the world's smartest dog, Mr. Peabody, and his adopted son Sherman traveling through time and fixing mistakes that were made in the past.  Despite not being pparticularly excited for this film, I was still interested in it considering that DreamWorks hasn't let me down in several years.   Needless to say, I had a lot of fun with this movie.

Mr. Peabody was born and grew up as an orphan due to no kids wanting to adopt him.  Since nobody ever adopted Mr. Peabody, he decided to get an education and live life his own way, soon going on to become the world's smartest dog.  However, Peabody was missing something in life, and that something was Sherman, whom he legally adopted when Sherman was an abandoned baby in a box.  7 years pass, and Sherman makes an enemy in the form of Penny on his first day of school.  As circumstances unfold, Sherman accidentally takes Penny back in time using Peabody's time machine called the WABAC.  Peabody and Sherman then must go back to other time periods with Penny to fix any type of damage they might have made in order to prevent any major events, and even the universe, from changing.

From the stellar voice acting to its crisp and beautiful animation, "Mr. Peabody & Sherman" suceeds at being an entertaining and sweet animated movie, as well as a great film for kids to see if they want to learn about their history.  I had such a fun time watching this despite some of the flaws that were present here, including some predictable moments here and there.  Ty Burrell is superb as the voice of Mr. Peabody, as are Max Charles, Ariel Winter, and Patrick Warburton to name a few.  In all honesty, I'd rather see a sequel to this film than "The Lego Movie," and the reason for that is because I feel that this film could explore more parts of history and succeed at making them entertaining segments to watch.  As crazy as I may sound, I personally think that "Mr. Peabody & Sherman" is the sweetest, most charming, and most entertaining kids movie out there right now.

How To Train Your Dragon 2