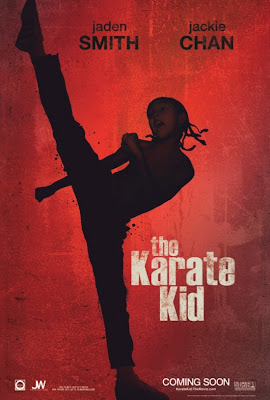 I never saw the original Karate Kid with Pat Morita, but after seeing this, I want to see what the original was like, because this movie was funny, dramatic, and just plain fun. Dre Parker and his mom are being relocated to Beijing, China for a job. Dre of course is the new kid at school and doesn't know much Chinese. But then he meets the perfect girl, a violinist "controlled" by her parents. But on the same day, he meets the local bully who loves to pick on Dre. So with the help of the local maintenance man, Mr. Han, he will be taught the arts of kung-fu and make an unlikely bond. This was one of the surprise movies of the year that really kept my attention throughout, even though it was a half hour longer than it should've been. It was very fun to see the bond that Jaden Smith and Jackie Chan made throughout the movie, (MILD SPOILER) especially to see the history of Mr. Han's very emotional life. (END) But with all movies, it has its flaws thrown in. One of the problems that I had with the movie was Dre's mother. Don't get me wrong, Taraji P. Henson is a great actress and was terrific in The Curious Case Of Benjamin Button, but in this movie she was just plain annoying. They should've had fewer scenes with her in it, even though the motherly role is kind of a real life role, and by that I mean most mothers act like how she does in this movie. Other than that, the only other problem I had was that some scenes were just a little too long. But I do think the movie had a solid story and a good cast that led into some very dramatic and very funny moments. Harold Zwart, who also directed The Pink Panther 2 makes a movie that well deserves plenty of standing ovations. I would like to point out that this movie, even though it's considered a family movie, the movie can be very intense at parts, like the fighting and bullying sequences. Plus, (SPOILER) there is one intense scene involving Jackie Chan and a car. (END) But other than that, it's a good movie. I would also like to point out that if this movie gets nominated for any Oscars, it probably will be for Best Cinematography. The reason for this kind of nomination is because the shots of China's buildings and the Great Wall are just exhilerating to look at. Also, if you are going to see this movie, I just want to point out that even though this is called The Karate Kid, it should be called The Kung Fu Kid because Dre is learning Kung Fu, not Karate. In fact, America is the only part of the world that calls this movie The Karate Kid. But if you do see this, you sure will be in for a summer treat. I can surely guarantee I will see the original Karate Kid and make the comparison. So if you're looking for family action and fun with Kung Fu, then go and check out The Karate Kid.