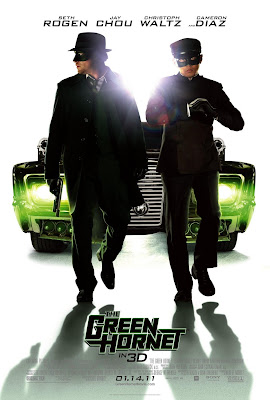 After almost two years of speculation, controversy, and 3D conversions, Seth Rogen's The Green Hornet has finally been released in theaters. Now let me just point out (in case you haven't figured it out already) this is not your typical superhero movie. Heck, this isn't even a superhero movie to begin with. The Green Hornet doesn't have super strength, the ability to fly, or even super speed. What The Green Hornet has is Kato, who can be described as a more kick ass version of Robin, without the tights. Without Kato being in this movie, The Green Hornet would probably be a crappier version of Tommy Boy. But thanks to the entire cast of the movie, The Green Hornet is one of the best times I will probably have in 2011. Well, it was better than The Dilemma.
Britt Reid has always been an incredibly spoiled person, who's only satisfied by getting drunk and having one night stands every night. But when Britt's father James dies unexpectedly, he realizes that he hasn't done anything good for his life. But along comes Kato, James Reid's personal car worker and coffee maker. Britt, wanting to do something good with his life teams up with Kato to become undercover heroes posing as villans. And thus, The Green Hornet is born.

You may be surprised that I enjoyed The Green Hornet more than The Dilemma, but you have to hear why I thought this was better. First off, I found the movie to be very funny. Unlike The Dilemma, this movie isn't taking itself too seriously. There was nothing really serious in this movie at all. Not all of the characters in this movie were unable to be related with and hateable. In fact, the only person in this movie that was a very hateful person is in fact Seth Rogen, the main character. You could describe him as being a fat, spoiled version of Bruce Wayne. Kato is what Robin should be if he was on steroids and was a cool sidekick. So if you hate Seth Rogen as an actor or as a comedian, this is probably not for you. However, if you like awesome action comedies with cool sidekicks, then you may actually like this movie.

Now here's the one reason why The Green Hornet was postponed to a January release: 3D. Yes, because of 3D, we had to wait over a year before we can see this movie. Well let me tell you that this 3D conversion was one of the best 3D conversions I've ever seen. You couldn't actually tell that it was a conversion, due to the 3D (which was kind of unnecessary) looking just as good as native 3D. So if you do want to see a 3D conversion done right, then this is the movie for you.

So The Green Hornet won't be the single best movie you see in 2011, but it's sure one he'll of a fun time. It's a laughable, action packed movie that really makes you want some if Kato's awesome looking coffee. If you're coming here for plot and acting, then you will regret spending the money. But if you're looking for some mind numbing 2 hour 3D fun, then you might worship this movie. I'm not saying you should go see it, but I'm telling you that it's a very fun comedy. So if you got stung by something recently, it might've been Tje Green Hornet coming after you.

Just Go With It

Pirates Of The Caribbean:
On Stranger Tides

Posted by Zachary Marsh at 1:43 PM