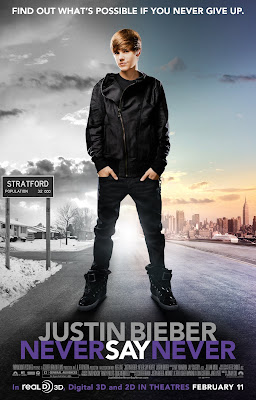 From the ideas of recent concert movies, and the director of Step Up 2 and 3, and the biggest male pop sensation since Michael Jackson comes Never Say Never, the extensive behind the scenes look at Justin Bieber's life and his sold out concert at Madison Square Garden. Now most people who are reading this may say, "Why is this handsome 14 year old seeing such a girly popstar movie?" Well as it may be hard to believe, I respect Justin Bieber as an artist and enjoy his music quite a bit. I don't get why so many guys hate Mr. Bieber so much. He is just a regular 16 year old kid living the dream of a lifetime. Now if you still hate the guy, then check out this movie. Not only is it a good documentary/concert movie/underdog story, it will also convert any Bieber hater into a Bieber admirer.

This movie shows the basics of Justin Bieber's life from when he was a very young and talented child, to his sold out performance at Madison Square Garden from 2010 and the rest of his 'My World Tour.' It shows the miracles that Mr. Bieber has had for the past 2 years, as well as showing some upsetting times in the Bieber family and the risks to take when being a worldwide known pop star.

The only way I could describe this movie while at the same time giving the movie some justice is that Never Say Never is a nice combonation of the Hannah Montana 3D concert movie, Michael Jackson's This Is It, and every underdog/inspirational movie ever made. I'm not saying that this is the single greatest music documentary ever made, which girls will probably say. Heck, they might even say that this is the single greatest movie ever made. This movie is none of that, yet the movie is still an entertaining and eye popping 2 hours that includes hundreds of screaming girls and leaves you with a big smile on your face.

I admire Justin Bieber as a singer, since he's probably one of the best modern pop stars of the new decade. Ever since 'Baby' came into the earholes of America, I believed that Justin Bieber is this generation's Michael Jackson. He's not as talented as The King Of Pop, yet has some very catchy and good songs, screaming girls dying at his feet, and the entire world in the palm of his hand. Not only is he a great performer, he is also a teriffic role model for many young children and teens. As the title of the movie states, Mr. Bieber sings and mentions that whenever you have a dream as big as your heart, never give up ion it, follow your dream, and never let people convince you that you will never be able to follow that dream. As an aspiring movie director, I will personally take this quote with me all the way to my success, as well as pass on the quote to many people in the years to come.

People think that Justin Bieber is a gay, girly popstar with terrible songs. But they don't understand that Justin Bieber, along with other rising stars is just a regular, yet talented teen living his dream, while at the same time being a kid. This is clearly shown throughout the entire 105 minute running time, especially in the home videos shown showing many of Mr. Bieber's extrordinary talents that he possesses. This movie had every aspect of a concert/documentary, like 'This Is It,' yet also adding native 3D to the effect.

To tell you the truth, only the concert scenes in the movie were shot/shown in 3D, and even though the 3D scenes are used very well, this movie doesn't really have to be seen with the 3rd dimension. But I would recommend it, to those who are up for the risk. But 3D or no 3D, this movie delivers what it promises, plus adds a few extra goodies to the bag, including special apperarances by musical acts like Boys II Men and Sean Kingston. So when you're speculating whether to see Justin Bieber or not, believing that it will never be a good movie to yourself, do what the title says and 'Never Say Never.'