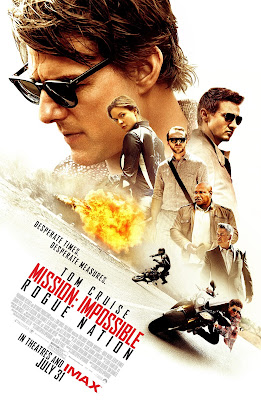 As someone who didn't love "Mission Impossible: Ghost Protocol" as much as the majority of people, I wasn't particularly pumped to see the latest film in the long-running franchise "Rogue Nation."  This film has Tom Cruise's Ethan Hunt on the run to expose the syndicate and bring them down after the IMF is shut down by the CIA.  One has to wonder how the action compares to that from "Ghost Protocol" since the stories in all five films are almost identical.   Well, the opening scene of this movie, that being the sequence involving Cruise hanging off the side of a plane, is the least ridiculous thing to happen.   That should put into perspective how much more ridiculous this movie is compared to the previous one.

The entire cast is a lot of fun here and is clearly having a blast making this flick.  Cruise, in particular, shows that he loves this franchise and will risk his life to keep making these movies.  Christopher McQuarrie, whose last directorial effort was the 2012 film "Jack Reacher" also starring Cruise, does a solid job here as the movie's director/co-writer.  There were jokes and scenarios that fell flat, and the villain wasn't written to be as menacing as he should have been, but McQuarrie's work on the film overall was good.  The action sequences, particularly one involving Cruise going underwater, are spectacular to watch, especially in IMAX.  The movie isn't as fun and ridiculous a summer blockbuster compared to something like "Jurassic World."  Having said that, "Mission Impossible: Rogue Nation" is still a blast to watch and will be enjoyed by those looking for an action-packed, well-paced popcorn flick.