REVIEW: Scott Pilgrim vs. The World 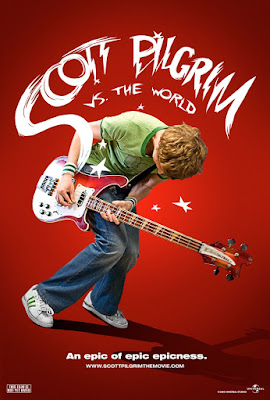 MOVIE
Scott Pilgrim vs. The World

Edgar Wright is a director where I have never seen any of his films, since they were all R. I've heard all of his movies are quite good, but not even that could prepare me for this. His latest movie is Scott Pilgrim vs. The World, an action-packed, video game-like love story is is practically a love letter to the video game/Nintendo generations and is truely, a film like no other. What I mean by that is, imagine a movie that combines video games, a love story, and a whole lot of cartoonish violence. Yes, it is hard to believe, but with Edgar Wright behind the camera and Michael Cera (what the heck?) as the title character, it becomes a movie that never looses your focus until the credits start up.


How can a movie with such a simple plot be so entertaining to the modern audience? Personally, I have NO idea. The movie is just one of those that pulls you in and in a way, makes you feel involved. From the moment the retro version of the Universal theme came on, I knew I was in for a treat. Probably one of the reasons why the movie is entertaining is that the whole movie acts like a video game. You know, the old late 80s-early 90s ones with the power ups, tokens, etc. For example, in one scene, you see Scott going to the bathroom, and a pee bar appears on the screen and drains out while he's going. Stuff like that, but that's one of the main reasons why this film is so fun.


The casting in this film is quite perfect for this type of movie. Michael Cera, who plays the same character in every film he's in, which is the nerdy character plays Scott pretty well, even though I never read the graphic novels, although I am going to try to pretty soon. But of all of the excellent performances in the movie, the one that stole the show in every scene he was featured in was Kieren Culkin, younger brother to child star Macauley Culkin. Kieren plays Scott's very cool, very gay roommate Wallace Wells, who is both a motivator to Scott and very funny throughout the 2 hour movie. Another group of cast members that stole the show were the seven evil exes, which included major stars like Chris Evans and Jason Schwartzmen.


I did also think that the idea itself was pretty clever and original. It asks the fatal question: how far will you go to get the girl of your dreams? That is answered in the movie, but I don't want to spoil it. I do also think that the visual effects were pretty impressive. Not as amazing as Inception's visuals, but this at least deserves a nomination, whether it's at the Oscars or Golden Globes. Throughout the movie, whenever something makes a noise, like thud, the word "thud" would appear on as if it was a comic book or graphic novel. And movies don't normally do things like that. That's why this movie is so good: because it's different.


I would like to point out that, even though this got and deserves a PG-13 rating, really there were only a few parts that were inappropriate. I didn't see this with my 9 year old sister, thankfully, but after walking out, I really didn't think it was too bad. Personally, I think she'll be fine with it when she turns 11. Other than that, the only things risque in this movie were A.) Kieren Culkin being shown in bed with men, though nothing graphic is shown, B.) There's one scene where the two leads are half dressed and making out on a bed, though nothing after that happens, and C.) and I get this quote on quote from CommonSenseMedia.org, "One of Ramona's evil exes is a "bi-curous" girl; Scott defeats her by touching her in an innocuous place that makes her have an instantaneous orgasm and explode." Other than those particular parts, this movie is good for 11-12 year olds.

Overall, Scott Pilgrim might not be for everyone, but I sure as heck had a very fun time. Video game fans will be very pleased wih the movie, as will moviegoers who have a taste for things like this. I truely think that some of this stuff could be Oscar worthy. Nothing like Best Picture or Best Director, (although I would nominate this for both) but for things like Best Adapted Screenplay and Best Visual Effects. But if this did get nominated for Best Picture, I would be both surprised and pleased. There's so much more that I can say about the movie, but I can't remember them all at once. I would like to point out that the soundtrack and score for the movie, in which the soundtrack includes songs from Scott's band Sex Bob-omb blends with the movie's epicness flawlessly. So if you want to experience one of the best films of 2010, then you might want to check out Scott Pilgrim vs. The World.


Skyline
Posted by Zachary Marsh at 3:56 AM