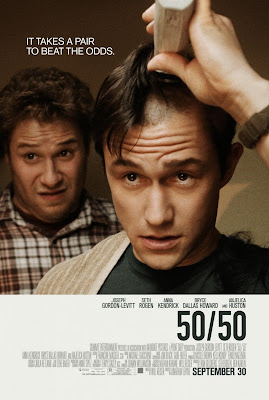 There are many families around the entire world who suffer with a person who has cancer. It is a sad and frightening time, especially since you have no idea how long, or if the victim will even survive the disease. My family has had plenty of experiences from cancer, myself only been living through one family member's diagnosis. 50/50 tells the story of Adam, a 27 year old man who suddenly finds out that he has a rare type of cancer. This movie shows how Adam lives with the tumor and tries to get through it all, with the help of his parents, a psychiatrist in training, and a friend who only cares about sex and drugs. My dad was gracious enough to let me attend a special screening of this movie on August 2. I am very happy that he let me go see this movie because under all of the Seth Rogen "sex and drugs" humor, 50/50 is a gripping medical drama that deals with the harsh realities of everyday life.

The best thing that I got from this movie was the funny and powerful performances of the entire cast. Joseph Gordon-Levitt, who may be well known to audiences from films such as '500 Days of Summer' and 'Inception' plays Adam, the film's sick character. Throughout the movie, you see Adam and the people around him dealing with his cancer in such a way that can make it funny and heartbreaking at the same time.  In fact, Gordon-Levitt's performance of Adam is so realistic and powerful, that he could just as well be a friend of yours that happens to have cancer.  Overall, Gordon-Levitt gives a powerhouse performance, and deserves all of the praise that is to come.

As many know, Seth Rogen plays Gordon-Levitt's best friend in this movie and as expected, Mr. Rogen is playing himself once again, this time in a cancer movie.  Rogen delivers most of the laughs in this movie, and it's something you just go with.  He also delivers most of the foul language and sexual candor, which is also to be expected.  He is very funny in this movie, but I would've loved to have seen him branch out into a serious role rather than being the weed smoking, foul mouthed, horny we've all come to know and laugh at.  The supporting cast, including Oscar nominee Anna Kendrick, (Adam's young psychiatrist) Bryce Dallas Howard, (Adam's girlfriend) and Angelica Huston (Adam's concerned mother) was fantastic, all playing their parts to help keep this movie going along its melodramatic path.

The script for this movie was written by Will Reiser, who actually wrote the script based on his experience with battling cancer.  Reiser, who is a first time screenwriter has written a very powerful and funny script that will captivate the audience throughout the movie.  There is a particular scene in his movie involving Adam in a car that was so powerful and heavy that I doubt that it came directly from Reiser's mind.  You can see the reality of Adam's diagnosis in the movie, and feel for him as if he was a buddy of yours who has cancer.  Of course I doubt that Reiser had Seth Rogen in mind for this movie, otherwise there wouldn't have been so many f-bombs in this movie.  The script is well written, with the right amount of comedy and drama, and I believe that it should be considered for a Screenplay nomination during awards season this year.

As we're wrapping up the year of 2011, let's look back at what type of dramas we've gotten:  we have seen dramas about girls recovering shark attacks, white women defending black women against the racist, and two brothers fighting in wrestling for different reasons.  The story of a man who has cancer isn't brand new, but it certainly is a fascinating story, especially if it stars he drunkest man alive and was written by a fantastic newcomer who can relate this movie to his personal experience.  Sometimes the best movies come from the personal experiences of one's writer or director.  This fact is clearly shown in '50/50.'  The film will definitely make you laugh at parts, but it will also shock you or possibly even make you cry.  Overall, '50/50' has great acting, a well written script, and a lot of heart as the movie progresses rough its 100 minute length.  Whether you're seeing this movie because you know someone who has cancer, or are just going to see Seth Rogen f-bomb all of the time and make sexual references, you will come out of this movie enjoying what you say.  What are you're chances of seeing '50/50' whenever would be 50/50, but that would be just another one of my lame jokes.

Posted by Zachary Marsh at 4:00 PM