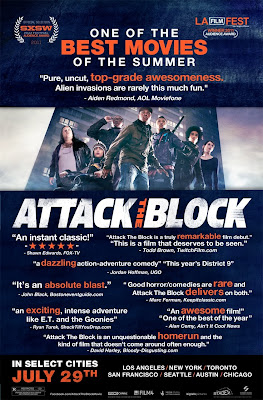 You have no idea how much history I have with 'Attack the Block.'  Ever since this movie premiered at SXSW earlier this year, I have been very eager to check it out.  After all, Edgar Wright, the director of 'Scott Pilgrim vs. The World' had faith in the film and produced it. I've been very eager to see this movie, especially since the film screened in Philadelphia in both May and June and I couldn't attend either screening. Then the film opens on July 29 in select cities and the closest place to me was New York City: 2 hours away!  Now Sony finally brings this movie to Cherry Hill, NJ just as my freshman year of high school is about to begin. My dad and I decided to catch the latest showing of it on Friday night, and now here I am. I am very pleased to tell you that if you're down in the end of summer slumps and just want to go see something great to kick off the fall season, then I have found that movie for you! If you like gore, British slang/swearing, weed, or epic killing aliens, then 'Attack the Block' is the must see movie for you.

On a night of celebration in South London, a young woman named Sam is mugged by a group of teenage boys who live in a building called "The Block." During the mugging, a strange meteorite crashes and an alien comes out trying to kill the kids. Scared but brave, the kids kill the alien, but that only makes matters much worse. More aliens come and are killing anything in their path. Now it's up to these South London kids to defend their town and save their neighbors before the aliens attack the block.

In a time when the only movies that are being released are either, sequels, reboots, remakes, or adaptations, it's nice to see a movie that is fully original and fresh. The only other original movies that have come out this past summer were 'Midnight in Paris' and 'Super 8,' though 'Super 8' was more a Spielberg homage than an original concept. It's ironic in some ways that an original story concept was written by a first time director on a minuscule budget with a cast of nobodies. This sci-fi flick proves that all you need is an idea to make a great movie, with special effects and explosions just being an added bonus if used properly.  Quality is more important than flashy CGI effects and awful uses of 3D, and that proof comes from some of this year's more recent duds.  Directors like Michael Bay and Zack Snyder can learn from this movie, as they know how to work the CGI computers, but they can't exactly write great scripts.  Even the gore in this movie, despite looking very cheesy is effective and will gross you out at least once.

I know that I've been saying this in reviews for many other films, but the teenage cast of nobodies really make this movie.  The lead of the film is Moses, played by newcomer John Boyega.  He is the leader of the group of teenagers who are out to kill the aliens.  This guy is the real heart and soul of the film, and can really carry a film on his own.  Boyega's supporting cast are only there for the comedic element of the film,  and that only enhances the film's enjoyment.  The most well known person in this movie is British comedian Nick Frost, most famous for such films as 'Shaun of the Dead' and 'Hot Fuzz.'  He plays Ron, a drug dealer who has access to the safest area in the block, which won't be mentioned because it gives away one of the best jokes in the movie.  Another great cast member in the film is Luke Treadaway, who plays the incredibly high, incredibly funny character Brewis.  The best chemistry in the entire movie comes from Ron and Brewis, who are incredibly smart, yet so high it's hard to recognize that.  The rest of the characters, including Jodie Whittaker's Sam and Alex Esmail's pest are all the perfect choices for their roles, each with the right amount of fear, comedic jokes, and swear-filled one liners to satisfy the average moviegoer.

To summarize, 'Attack the Block' is a cinematic experience not worth missing.  It will make you laugh in your seat, it will make you jump out of your seat.  Heck, it will make you feel higher than any of the characters in the film who are smoking weed and just lounging around throughout the 88 minutes of the film.  The aliens in this movie will scare you, even if they're just big ape like monsters with green teeth.  The scenes where they kill numerous humans will gross you out without a doubt.  The slang/English isn't even that hard to understand, that is if you read the slang cheat sheet for the movie.  I have a feeling that this will be one of those movies that gets even better after multiple viewings on DVD and Blu-Ray.  Last year that movie was 'Scott Pilgrim,' and now it's one of my favorite movies!  First time director Joe Cornish has made a film that I guarantee will blow your mind, and I tip my hat to him, along with producer Edgar Wright for having teriffic taste in movies.  You may have to seek this movie out, as I believe it's playing in about 20 cities throughout the country, but it is totally worth the trip and ticket price to see it.  Do yourself a favor citizens of the US, if comedy and horror is your type of shtick, then do yourself a favor: see 'Attack the Block' and become what the media is calling a "Blockhead."  Believe it, bruvs.  Believe.


Sherlock Holmes:
A Game Of Shadows

Posted by Zachary Marsh at 3:00 PM