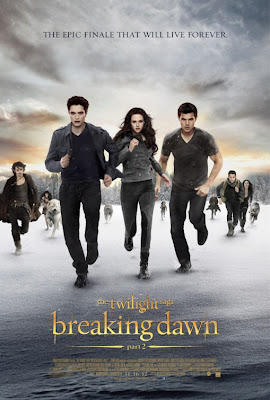 Well, this is the moment that guys of all ages have been waiting for years: this marks the end of the worldwide phenomenon known as 'The Twilight Saga.' This series has been one of the more controversial ones ever since the first film came to the big screen all the way back in 2008. Four years have passed, and now this is the time where the male testosterone can rise up against the females and take the title of "fanboy" back to their homeland. Personally, the 'Twilight' films are a guilty pleasure of mine. Not because I actually consider them legitimately good films, but because they are fun to watch sometimes, especially with a screaming audience filled with girls. The thing that's surprising about 'Breaking Dawn Part 2,' however, is that it can be considered a legitimately good film once it gets past the 10 minute mark. Yes, there are extremely cheesy moments placed throughout the film, but this final installment plays around it's really stupid elements, can be pretty funny at times, and has a climatic battle sequence that will both shock and entertain those who are watching it. 'The Twilight Saga: Breaking Dawn Part 2' is, without a doubt, the best film in this four year long series.

Picking up immediately after 'Part 1' ended, it is shown that the emotionless Bella Swan has now become a vampire. She also has a half-human, half-vampire daughter named Renesmee, who can show people her memories. Life seems to finally be getting into place, with even Jacob creepily becoming Renesmee's watchful protector after he "imprints" on her as a baby. However The Volturi, the "leaders" of vampires, believe that Renesmee was bitten as a baby rather than being born as a half human, half baby breed. The Cullens need to come up with a plan, so they get vampires from all parts of the world to come and try to help persuade the Volturi into actually believing the truth about Renesmee, before they're all beheaded.

If people keep complaining about the acting in these films, then they don't understand that the performances in these movies aren't supposed to be great. Kristen Stewart, for the first time in the series, actually shows some convincing emotional moments in this movie. For example, the audience gets to see Bella get angry with a certain someone because of a certain something. The moment is funny, and luckily it was supposed to be funny. Robert Pattinson has a couple of humorous moments in here as well, but he does overall give a good performance as well. Taylor Lautner even knew how to point out the flaws and stupidity of his character Jacob, which included a scene of him taking his shirt off that might be the funniest moment in the series. The rest of the cast, including Michael Sheen and Billy Burke, all has their weird and funny moments in the movie, just like the three leads. That's really all that can be said about that.

Melissa Rosenberg has written every single script in the 'Twilight' series thus far. This is the first time where the script actually isn't all about the "I love you" and "you are my forever" lines that had to be spewed by the actors. Instead, the script addresses how stupid a lot of the elements of the movie, like how Jacob "imprinted" on Renesmee at the end of 'Breaking Dawn Part 1,' really are, and actually makes fun of certain situations going on in the movie. Having not read the book, the twist at the end of the movie actually came as a complete surprise to me. It's one of those twists where you'll either love it or you'll hate it. I am in the group of people that actually liked the twist a lot. Without giving it away, it basically says to the audience "be careful with what choices you make in certain situations," which I admired. While it's not the most well written script out there, it certainly is a great script in 'Twilight' standards, and is a lot funnier than one would expect. ]

Aside from pretty poor scripts, the visuals in the 'Twilight' films were never great. While the werewolves look considerably better than they ever have, a lot of the other CGI effects look awful. When the audience sees baby Renesmee for the very first time in the movie, I swear the CGI creation looks so fake that it makes the E-Trade baby look like a work of art. Even when the vampires get beheaded, while cool, it looked pretty laughable. Speaking of beheading, the filmmakers actually got something right and made the big climatic showdown between the Volturi and the Cullen's team was actually really fun to watch. Main characters surprisingly get killed, and some of the beheadings were actually pretty badass. Despite the visuals being as mediocre as they've always been, the final battle is actually really cool to watch.

The 'Twilight' movies have never been great ones, but they always have been enjoyable to me. 'Breaking Dawn Part 2' isn't a great movie by any means, but I'm not going to lie and say that I didn't enjoy myself while watching it. The script plays with the ridiculous ideas that have been carried throughout the series. The actors in the film were clearly having a fun time making the movie, and it shows in their performances, which are considerably better than their performances in the other movies. Director Bill Condon shows here that he wanted to give Twi-Hard's the ultimate 'Twilight' finale, and that's what is indeed given. If you're not a 'Twilight' fan and are dragged into seeing it by someone, just go into it not expecting something great and chances are you'll have a fun time. This is a great example of what a cheesy modern B movie should be like: a film that doesn't take itself seriously but delivers on some cool action. 'The Twilight Saga: Breaking Dawn Part 2' is the best film of the series, plus ends it in a way where I respected the series a little more than I have before. As long as we all know that sparkling vampires and shirtless werewolves with six-packs should never be taken seriously, you should have a fun time watching the movie.

Oz: The Great and the Powerful


The Mortal Instruments:
City of Bones


Now You See Me

Posted by Zachary Marsh at 3:19 PM