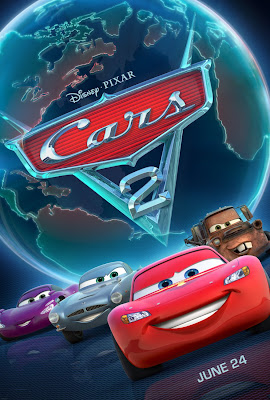 Of all of the fabulous Pixar films to be chosen for a sequel, they choose the least popular film on their resume, Cars. I, like every die hard Pixar fan would've rather wanted to have seen an Incredibles 2 or a Finding Nemo 2. But alas, this was a financial choice and I would've rather seen a Cars 2 than another Wall-E. (I hated that movie unlike the 96% of critics on Rotten Tomatoes) So of course I would go see this latest Pixar movie with an open-mind, hoping for Pixar to once again deliver like they did last year with Toy Story 3. First off of the bat just let me say that Cars 2, unlike every other Pixar movie has no PSA like message about our home planet, fancy life montages within the first 10 minutes, or an ending so bittersweet the entire audience was bursting in tears. There is no heart present in Cars 2 at all. Why would a movie having a hillbilly tow truck as the main lead have any kind of heart at all? I don't know, and I'm glad this movie didn't. This movie is just a full spy movie homage with Mater the Tow Truck at the lead. This movie clearly won't satisfy anybody looking for another Up or Toy Story 3. If you go into this movie just ready for anything, you will enjoy Cars 2 no doubt. This may not have the heart every other Pixar movie beholds, but Cars 2 is the one Pixar movie that is full blown action and many bellylaughs throughout. Not only is this movie better than its predecessor, but Cars 2 might be the one animated Disney movie that you don't need any heart to enjoy.

SYNOPSIS: (Courtesy of Zachary Marsh's Mind)
Lightning McQueen and Mater are about to take their friendship to new locations when they travel to the world's first ever World Grand Prix. But things start taking a slight detour for Mater as he gets involved in an international spy espionage. Teaming up with Finn McMissile and Holly Shiftwell, Mater must stop a group of "lemon" cars before they use the race to gain lots of money by corrupting it. Will Mater suceed? Will Lightning win the World Grand Prix? Is the Popemobile Catholic? Find out when you see Cars 2.

This isn't the sequel we expected from Pixar at all. I mean, we expected something high off the heels of the Toy Story sequels. Instrad, we just get a spy movie homage with bumbling Mater at the lead. Who exactly asked for this? Nobody, actually. However, John Lassetter made it, so we know that it has something in it. Lassetter, along with co-director Brad Lewis created a fun spy movie with our kids' favorite Pixar characters. This movie isn't meant for adults at all. I believe that critics are bashing on this movie because they didn't expect Pixar to make a movie with no heart, and all action/comedy. This is the perfect start for kids if you want them to start watching old spy movies, more noteably old James Bond movies. I personally have never seen a single James Bond movie or ever read a single James Bond book. It's not that I have anything against the famous spy, it's just that I never got around to watching or reading a James Bond story. I will one day, but today is not that day. I found this movie to be similar to a Scooby Doo cartoon at parts, particularly the ending. It just added to the goofiness and fun of the movie. For kids who enjoy a fun Scooby Doo cartoon will enjoy this Scooby Doo cartoon with Mater being Scooby Doo.

Speaking of Mater, the voice cast was outstanding. Owen Wilson was Owen Wilson, and Larry The Cable Guy was Larry The "Git-R-Done" Guy. Mater was the main comedic point of the movie. I mean look at his appearance, you know that he's going to be the comedic point of the movie. I liked how they had a tribuite to Doc Hudson, aka Paul Newman in this movie. The segment was brief, but nevertheless a nice tribuite to the late actor. Instead of paul Newman as the mentor of the movie, we get Michael Caine as the head international spy guy, Finn MicMissile. He was clearly the coolest character in the entire movie, mostly because his character was badass. Who would've thought that a talking car could be a badass. We already knew that adrenaline pumped guys driving fast cars could be badass, so this came as a nice surprise to me. He is the James Bond of the Cars world. In fact, Michael Caine's James Bond persona was a nice take off of the character played by Sean Connery and many others. He may soon become one of Pixar's most memerable characters, along the lines of Woody and Buzz. The characters in this movie clearly make the entire movie. The rest of the fantastic ensemble cast include John Turturro as the rival Itallian car Francesco Bernoulli, Jason Issacs as a spy jet named Siddeley, and of course John Ratzenberger in the small role of McQueen's carrying truck Mack. The characters were awesome, but the story was just so so.

Like every 20th Century Fox movie, the plot of this movie is clearly never explained in the trailers. We get the edges of the story in the trailer, but never the full core of the story. The real spy story involves a group of "lemon" cars sabatoging a new type of electrical fuel so cars would have to start buying gasoline over electricity, thus making them the richest cars in the world. The plot is a bit uninspired, pulling a Fox, but it adds to the fun of the movie. Actually, whenever a movie other than a Fox movie pulls a stunt where the plot is never explained in the trailer, I'm just going to call it "a super Foxy move." Aside from the story in this movie, everything else is just pure summer animated awesomness fun.

Cars 2 may not be the best Pixar film in the franchise, or appeal to both audiences and critics, but it was only made to be pure summer fun. The action scenes look incredible, the driving scenes that are shown worldwide look breathtaking, and the characters are likeable enough for you to want to stick around and see what happens next. The characters will keep your eyes glued into your glasses, and will make you laugh until your glasses get foggy. This movie isn't popular with critics because it lacks the heart of Pixar's other masterpieces. However, audiences will love this movie bewcause of it being just a fun summer movie. The kids will love it because of Mater, and adults will love the whole spy homage and the fact that their kids are having a good time watching their toy cars spring to life in 3D. The 3D doesn't add alot, but it looks cool when you're watching the racing sequences, the spy action scenes, and the Lion King/Brave previews. If you're choosing to see a fun family movie that both kids and adults will enjoy, you should probably choose this movie if Kung Fu Panda 2 is nowhere to be found. I'm glad that I enjoyed this movie this week after the annoying penguin movie last week. Unless you want to see Jim Carrey kill himself over a bunch of penguins, go see this action packed 3D spectacle. The Cars are fun, the movie looks cool, and it's just everything you want in a summer movie. Do yourself a favor and give Pixar another chance with their latest sequel, Cars 2.


Spy Kids:
All The Time In The World