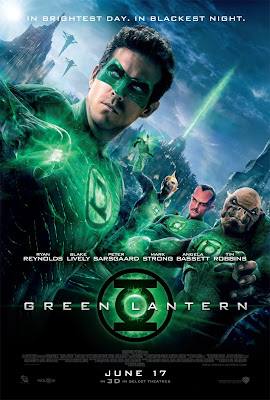 It's Father's Day weekend and what better way to spend time with your dad then to go see a big budget superhero movie? Warner Bros. and DC have decided to release the much anticipated superhero flick, 'Green Lantern' in all of its 3D glory this weekend. This latest superhero adaptation stars Ryan Reynolds as the sometimes cocky and sarcastic pilot Hal Jordan, who suddenly is granted the responsibility of defending the universe as a Green Lantern. Back in November when Harry Potter 7 came out, a negatively received teaser for Green Lantern came out and there seemed that there was no hope for a good Green Lantern movie. However, our negative thoughts were flushed down the toilet as three fantastic trailers came into the spotlight. So now we have the final product, and the result is pretty mediocre. As much as I wanted to like Green Lantern, in the end there was nothing more than a good lead, killer visual effects, and spectacular 3D. Everything else is just bad in the movie. As much as this movie had going for it, Green Lantern might possibly be the worst superhero movie I've seen since Spider Man 3.

SYNOPSIS (Courtesy of ComicBookMovie.com)
In a universe as vast as it is mysterious, a small but powerful force has existed for centuries. Protectors of peace and justice, they are called the Green Lantern Corps. A brotherhood of warriors sworn to keep intergalactic order, each Green Lantern wears a ring that grants him superpowers. But when a new enemy called Parallax threatens to destroy the balance of power in the Universe, their fate and the fate of Earth lie in the hands of their newest recruit, the first human ever selected: Hal Jordan. Hal is a gifted and cocky test pilot, but the Green Lanterns have little respect for humans, who have never harnessed the infinite powers of the ring before. But Hal is clearly the missing piece to the puzzle, and along with his determination and willpower, he has one thing no member of the Corps has ever had: humanity. With the encouragement of fellow pilot and childhood sweetheart Carol Ferris, if Hal can quickly master his new powers and find the courage to overcome his fears, he may prove to be not only the key to defeating Parallax…he will become the greatest Green Lantern of all.

It seems that Warner Bros. is having a bad year so far with their movies, in terms of quality. So far this year from the studio, we've had movies like Sucker Punch and The Hangover Part II. Both movies were over hyped, but turning out to be poorly thought out movies. Since I never saw those two movies, I can only believe what I read. Many have criticized Sucker Punch for a terrible script and being nothing more than cool special effects. The Hangover Part II was criticized because it was apparently the same movie as the first, just with a different location. I believe that Warner Bros. is purposely making mediocre movies in anticipation of making the final Harry Potter film the best it can be. Without Harry Potter come July 15, WB will have to start making more decent movies. Green Lantern is luckily the last movie in this trend, so let's hope for some good movies in the future.

I've never been a fan of sub-plots in movies ever. Sometimes they work in movies that have quirky characters and a smart plot. However the other 90% of movies that are bad have unnecessary sub-plots. Green Lantern unfortunately is no exception to this curse. I can't even remember exactly how many sub-plots there were in this movie, all I know is that they were all useless in this movie. These plots ranged from Hal Jordan trying to live up to his father to Hector Hammond (the Big Headed dude) be envious of Hal and having a crush on Blake Lively. That's why I had to get a synopsis for this movie from another website. Even on the website I used there were about five paragraphs worth of a summary. When a movie needs that much space for a single summary, you know that there's a story problem with the movie. There was even some supposed sentimental moment in which Hal is talking to his nephew just like his father talked to him as a kid. This moment wasn't needed at all, but I'm guessing that it was put in there for the sake of generating a family audience. In fact, I think that only die hard Green Lantern fans and general family audiences will be able to enjoy this movie. I've never read a single Green Lantern comic, but I expect the story in the comics to be far more superior to the cluttered storylines featured in this movie.

A bad story is only backed up by the cast in its movie. The worst thing about this movie was the somewhat large supporting cast. The supporting cast includes the undeniably sexy Blake Lively, the well known Peter Sarsgaard, and Tim Robbins. Blake Lively is clearly in this movie just for show, just like with Megan Fox in Transformers. Even though I can live with staring at these women for two hours each, there's no denying that they are both bad actresses. Like Natalie Portman in the Star Wars prequels bad. However I can give props to Lively for actually being a better actress than Fox. Believe it or not, Lively was not the worst actor in this movie. That position is a tie with the father and son roles of Peter Sarsgaard and Tim Robbins. They may good actors, but they are used poorly in this movie. Sarsgaard looks like Morgan Spurlock in the terrible makeup job and is laughing in almost every scene he's in with company. Tim Robbins is incredibly unbelievable as the father of Hector. I'm not sure if he just didn't want to be in the movie or if he was purposely acting bad throughout, but the truth is that he was unneeded in this movie and served no purpose being here in the first place.

Mark Strong is also in this movie playing Sinestro, the supposed arch enemy to the Green Lantern corps. He was only in the movie for about 20 minutes, including a stupid after credits scene that didn't make any sense to the movie at all. I think he was just in the movie to play a role in a possible sequel. The worst thing about Mark Strong in this movie is that he wasn't good as Sinestro at all. He was like an even more emotionless version of Professor X in the X-Men movies. In summary, all of the supporting actors were terrible in this movie. The only saving point in terms of acting is Ryan Reynolds in the lead role. Reynolds was very good playing a cocky pilot turned superhero in this movie. Sure he may not be another Tony Stark, but he was acceptable for what the role required. Like I said before, I never read a single Green Lantern comic, so i have no idea whether he perfected the comic book role. All I know is that Ryan Reynolds got the comedic timing right, as well as be a badass superhero. However, it seemed like he was trying to copy Christopher Reeve in the original Superman movies. That's when it got very corny. other than those moments, Reynolds was a good presence in a mediocre superhero movie.

The 3D and visual effects in this movie were good, but nothing spectacular. Sure seeing the planet Oa in 3D looked really cool, but that took up about 15% of the entire movie. For the rest of the movie we get three fight sequences and a slew of terrible dialogue in every scene in the movie. There was one scene on Oa where Hal projects a machine gun to battle off Sinestro for training that looked really cool in 3D. Actually all of the things Hal projected out of his mind looked incredibly cool in 3D. Well, the Hot Wheels like sequence in one of the big battle scenes was a bit cheesy. but still, the visual effects and 3D were really cool. They aren't any cinematic accomplishments, but they were just cool for the type of movie this is. However this superhero movie should have been much more than cool visual effects/3D and a fun main lead.

Despite having a strong main lead and some cool 3D effects, Green Lantern disappoints with a weak supporting cast, an awful script, and one of the most useless after credits scenes in recent memory. I had so many expectations for this movie because the trailers made this movie look like an epic of epic epicness. Instead, I just got a very corny, very stupid superhero movie that leaves me on the verge of asking for a refund. This isn't as bad as Batman & Robin, but this movie is just as bad as Spider Man 3. Spider Man 3 had many storylines too, as well as a bad script. This movie is the Spider Man 3 of DC movies. If you hated Spider Man 3 for all of the reasons I mentioned, you may hate Green Lantern. I think I hated this movie because I expected an action packed superhero film, like Iron Man and The Dark Knight. If you go in expecting a movie like Iron Man, you will be disappointed. All I know is that I didn't enjoy Green Lantern. People may enjoy this movie for the corniness it is. I am just one of the many who didn't. I will give the movie props for awesome 3D. But nevertheless, Green lantern is so far the most disappointing superhero movie in the last ten years. This movie isn't the most disappointing movie of the year. No no, that position is taken up by Mr. Popper's Penguins...