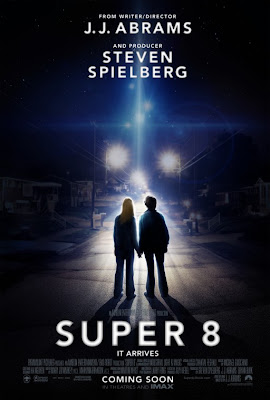 From the mind of director J.J. Abrams, the supervision and hope of Steven Spielberg, and the sense of originality that we haven't seen in many moons comes Super 8. Super 8 takes regular nerdy kids, puts them in a late 1970s setting, and have them witness a massive train explosion while making a amateur zombie film using a Super 8 camera, hence the title. Even from the early teaser shown with Iron Man 2 a little over 13 months ago, I had a strong feeling that this movie would be fantastic. The trailer that showed actual footage just made the movie my most anticipated film of 2011. Now after seeing the final feature, I'm am excited and happy to tell you all that Super 8 succeeded my expectations as it had thrills, chills, laughs, and heart. This may be pushing it a little, due to us only being through mearly half of 2011, but I believe that Super 8 is not only the best film of the summer, but the best movie of 2011, period. Sure, we have harry Potter, Transformers, and Tintin coming out during the rest of the year, but I believe that Super 8 will still go down as the single best movie of 2011 by far.

In 1979, Steven Spielberg had already come out with Close Encounters and Jaws, with only Indiana Jones and E.T. being a few years away. Super 8 revolves around the story of six kids trying to make a low budget super 8 zombie film in the summer of '79. On one night while they're shooting the movie at the local train station, they soon become the only witnesses of a massive train crash that destroys almost everything around it. The kids then soon find that someone or something has escaped from the train wreck, soon roaming around their quiet little town. Pretty soon the U.S. government comes to town to investigate the crash, while at the same thing keeping something bigger under wraps. Pretty soon one of the kids' fathers, the town deputy gets more and more suspicious of why the government is roaming the town.

Imagine if Stand By Me, E.T., Close Encounters, and The Goonies had a baby together, and had J.J. Abrams nurse it for its first few years. That's basically the layout of Super 8. If you're going into Super 8 expecting a full fledged sci-fi thriller, you may be disappointed. The real story and emotion from the movie comes from the six kids making the super 8 movie. That's right, a summer blockbuster with more heart than action. The kids in this movie, despite most of them being newcomers to this type of movie play their parts to perfection, and feel so real when watching them. The kids, to me were the best part of the entire movie. I'm going to give you a challenge right now prior to seeing Super 8: try to find yourself amongst the six kids in the movie.

I could relate to each kid, and feel their excitement, pain, and fear experienced throughout the movie. These kids are going to have a great future in movies because of Super 8. The best thing about the kid characters in this movie is the chemistry between Joel Courtney, who plays Joe (the main character) and Elle Fanning, who plays Alice (his love crush). With experience from the point of view of Joe, I think that they're chemistry was pitch perfect, showing a slowly bonding friendship that soon becomes a young relationship. The devotion that Joe has to Alice is very beautiful to see on screen, because he acts like how every adolescent boy reacts to seeing his crush. For those who currently have secret crushes, whether you're 12 or 35 can relate to Joe and Alice in this movie. That's why this movie is so great. Even if you're an adult watching this movie, you still feel your inner childhood being immersed into this sci-fi spectacle. For the biggest heart in a sci-fi movie since E.T., Super 8 is allthemore worth the theater experience.

J.J. Abrams' inspiration for Super 8 comes from Steven Spielberg's early movies, and that is clearly shown throughout the movie. This movie takes elements of such Spielberg productions such as Close Encounters and The Goonies and brings those themes into the modern age. For young ones who haven't seen a more mature Spielberg movie like Jaws or Close Encounters, this could be a good start for them. Kids would be able to understand the older movies better, as well as not get bored during Close Encounters, which happens to be a slow movie at some parts. However, this movie is not a kids movie at all. I'd say let those over the age of 10 see this movie, therefore they won't be as traumatized. This movie will make everyone in the theater jump a lot, which adds to the fun for most moviegoers. Kids may get scared by the monster in this movie, better yet the numerous attacks by the monster. But at least these scares aren't as intense as they would be in The Goonies, Cloverfield, or Poltergeist. For kids over 10 who are just getting an intrest into horror movies, then Super 8 may be a good start for kids seeing thrillers on the big screen. However for those kids who are experiencing a thriller/horror film for the first time, don't pay the extra money for The IMAX Experience.

I got the chance to see this movie during a sneak preview in IMAX. While most movies aren't exactly qualified to become a part of the IMAX experience, I believe that Super 8 is a definate must see in IMAX. It's not because of the picture resolution or immersion that something like The Dark Knight had, but it's because of sound. I've never jumped so much in a movie before and lived to tell the tale, but Super 8 is that breaking point. Seeing Super 8 in IMAX not only immerses you into the story, but it also makes you feel a part of the train wreck and the cahos that comes after it. The sound loves to be jammed into your ears, so i say let it. Although the usual IMAX ticket varies from $15-$20 a person, I believe that you may not have as much of a fun time jumping in an average movie theater as you would in IMAX. So if you have the money for a single ticket, I say go see Super 8 in IMAX and let the soundwaves do the rest.

With the biggest heart to come in ages, a teriffic homage to Hollywood's biggest director in history, and some of the most likeable kids to come since The Goonies, Super 8 is the must see movie of the summer. Everyone can relate to the characters in this movie, because we were all in a similar situation like these kids are in before. We all had first crushes, and obbsessions over many things. All J.J. did was add a sci-fi element into the movie to draw more of an intrest to the modern audience. I distinctly remember the movie Flipped, which also dealed with first crushes and obsessive best friends. I love these kinds of coming of age movies because I can relate to them so well. I've had many crushes in my late elementary school/early middle school days, and I do have a couple of cocky, self absorbed friends who I don't care for most of the time. The movies released these days about coming of age play these types of modern age settings perfectly, yet also adding a bit of excitement to the characters involved.

Adults, you have all been in the types of situations that these kids have been in at that type of age. Well, you never fought off the U.S. government to find a runaway monster, but I think you know what I mean. Kids will be kids, and that is clearly shown in Super 8. It works as a sci-fi thriller and has a coming of age story. For those who don't get that aspect of this movie, then stop expecting too much out of movies with kids as the main protagonists. As a kid, I believe that Super 8 is the best film of 2011. It brings out your inner childhood and helps you revisit some of the best times you had as a kid. There is a brief part in this movie where the five main boys are sitting around singing 'My Sharona,' and that's when I knew that this was a very realistic movie. It shows kids just doing what kids do for fun: goof off and sing great songs. That's why Super 8 is the absolute must see movie of 2011. I cannot wait to see this movie again and again and revisit these likeable characters. Plus, I need to get me one of those Super 8 cameras, if you know what I mean.