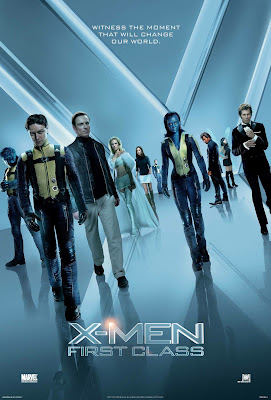 I never saw the critically acclaimed films Kick-Ass or Layer Cake. but those movies, directed by the X-Men series' latest director Matthew Vaughn were both very well recieved by audiences and critics alike. That was one of the many perks that X-Men: First Class had before it was released. However, the rushed shooting dates and average trailers made this movie seem less enjoyable than it was eventually going to be. Yes, I am very happy to report that X-Men: First Class is quite an excellent movie. It has the concept that the first two X-Men movies, the charm of any Marvel movie, and the bad-ass-ness of any superhero movie in existance. This movie is the perfect prequel to the X-Men franchise, and in my opinion may be the best X-Men movie of them all. I liked Thor a month ago, yet I noticed many of its flaws while watching. Now it's a month later, and I absolutely loved X-Men: First Class.

Before we called him Professer X, he was known as Charles Xavier, a gifted indivitual who can read minds. Before we called him Magneto, he was known as Erik Lehnsherr, a survivor of the Holocaust who can control all kinds of metal items and isdesperately seeking revenge on the man who killed his mother during WWII. As World War III is quickly being formed, Charles and Erik recruit a group of extraordinary kids with special powers, other known as "mutants." The man responsible for creating another war is Sebastian Shaw, a mutant who also happens to be the murderer of Erik's mother. While the mutants are being recruited, Erik is secretly planning to take revenge on Shaw for killing his mother. It is the events in this movie that supposedly set off the chain of events to occur in X-Men and X2. (let's just forget that 'The Last Stand' and 'Wolverine' ever happened, okay?)

A little over two years ago, another fantastic origin story came onto the spotlight. That movie's name was Star Trek, and I would be surprised to find people who didn't like it at all. The reason why I mention Star Trek is because this movie is the Star Trek of 2011. For people who love to revisit younger versions of characters whom they grew up with, this is an absolutely excellent movie. This may be the best superhero movie I've seen since the original Iron Man. Thats right, I'm cpnsidering this movie far more superior to The Dark Knight. I like this more than The Dark Knight for a few reasons: the first reason is that I believe that The Dark Knight was a bit overrrated, due to the fantastic preformance of the late Heath Ledger. The second reason is that I'm not as much a DC fan as I am a Marvel. The third and final reason is that DC always is too realistic for superhero films. Marvel films are just made to be unrealiastic superhero films. They're fun, witty, and sometimes over the top, yet most of the time they are purely excellent. Take Fantastic Four, Daredevil, Elektra, The Punisher, and the two other X-Men films out of the mix and you can consider all Marvel movies to be excellent.

I like how all of the recent Marvel movies these days have superb acting. Ever since Iron Man came out, the main lead actors have always been award worthy. The most notable mention must be Robert Downey Jr. as the title role in both Iron Man and Iron Man 2. Fox superhero movies have never had teriffic acting, with 2009's X-Men origins: Wolverine and 2005's Fantastic Four being prime examples. Finally, we have a Fox superhero film with fantastic acting. There is no singular main character, there are only two main co-stars. James McAvoy and Michael Fassbender are fantastic in this movie. They are funny, interesting, and most importantly, they are incredible badasses! James McAvoy shows a side of Professor X that we've never seen before. He doesn't seem so emotionless as he does in the first two X-Men movies, despite still being such a brainiac. In this movie, you see Charles being a college student: drinking and hitting on women. He sort of reminds me of a smarter Tony Stark in the 60s. Michael Fassbender actually may be the show-stealer of the movie. Even though I mentioned that these two stars are fantastic co-stars, there's something about Mr. Fassbender's performance as Erik/Magneto that steals the whole movie. You actually gain feelings for this troubled character, despite the destiny he has coming for him. He is now possibly the coolest supervillan of all time. All of the acting in this movie was great, but it was the two leads who were undeniably fantastic.

Despite my desire to give this a perfect four star rating, there's only one reason why I cannot. Despite being a prequel, this movie had no relations to X-Men: The Last Stand or X-Men Origins: Wolverine. This may be entering spoiler territory, so those who haven't seen this x-men or the previous two should stop reading this paragraph NOW. At the end of X-Men Origins: Wolverine, you see the young mutants escaping the science facility encounter Professor X. X can walk, yet he has no head of hair on him. At the end of this movie, Charles loses his ability to walk, yet still has his head of hair present. At the beginning of X-Men: The Last Stand, we find Charles and Erik meeting a young Jean Grey, who plays a significant part in the original trilogy. In this movie, she is not present anywhere in this movie, thus erasing her story in X-Men 3 from that storyline. I felt that Matthew Vaughn, the film's director should have revisited the original four movies and try to incorporate those stories into this one. After all, the mediocre third and fourth X-Men movies are still a part of the series. Still, this was just one wrong doing in this movie, and it never affects the way you enjoy the movie at all.

So with the charm of Iron Man, the special effects and awesome action of the first two X-Men movies, and the single best use of the "F" word in cinema history, X-Men: First Class is with no doubt one of the best movies of 2011. The movie makes you learn about the past of some of the most iconic superheroes in recent history, as well as give you explanations on how characters become the way they are. The cameos in this movie help give the audience some great laughs and small hints of characters that will be in the first two X-Men movies. There are four superhero movies coming out this summer. If Marvel plays their cards right, they may have one hell of a good summer. However, Green Lantern sure looks amazing. I believe that this movie may havde a strong shot as the best superhero movie of the summer. I'm saying this because I thought that Thor was just an o.k. movie. Thor might've just been o.k., but X-Men: First Class was a spectacular movie. Even if you're not an X-Men fan, you will still enjoy this movie because of the historical content this movie has. The summer is getting better and better by the week, and we're barley through June yet. I officially declare X-Men: First Class as one of the best movies of the entire year.


Rise Of The Planet Of The Apes


The Girl With The Dragon Tattoo