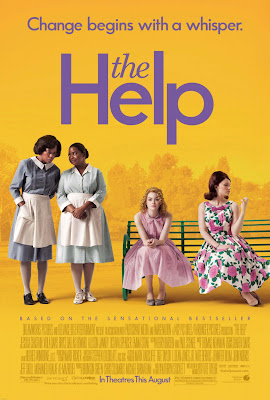 One of the most popular books in recent history is The Help, written by Kathryn Stockett. The Help is told from the point of view of the help, who were the black servants in Jackson, Mississippi. This book has generated lots of popularity ever since its release in 2009. Hollywood loves to adapt books into movies, and this book was no exception to them. To be honest, I never read 'The Help' before, so I can't compare this movie to the original source material. But I can tell you that for the first time this entire year, I was on the verge of crying in this movie. Not sobbing my eyes out, but just shedding a couple of tears. Of all of the films to be released this year, this is the most powerful film of the year so far.

It is the early 1960s and segregation is still in tact in the city of Jackson, Mississippi. Aibileen and Minny are among the many African American women who have to work as maids in order to make a living. Skeeter has just moved back home to Jackson after graduating from the University of Mississippi. She takes up a job at the local newspaper writing for a letter column. Hilly is the leader of a group of women who mainly support segregation to its fullest. She attempts to initiate a law giving "the help" a separate bathroom from the white people, to prevent "any diseases from spreading." Fed up by the fact that Hilly is being quite the bitch, Skeeter wants to interview "the help" in Jackson, Mississippi to put the less fortunate in the spotlight, and show the true colors of the spoiled white women.

Looking at the poster of this movie, you may think that it's just another chick flick based on a best selling girls book, which in some ways it is. How would you even expect for 95% of the audience at my screening to be women? Instead of this being just another book turned chick flick like such recent "classics" like 'The Sisterhood of the Traveling Pants' or 'Confessions of a Shopahollic,' this movie gets very serious, and sometimes even heartbreaking. Even though this movie is considered a comedy, which this movie tends to be alot, you have to remember how heavy a subject racism is in this movie. There are some moments in this movie where you will be laughing in your seat hysterically, but then a split second later your jaw will be on the floor in shock and anger. What these pampered women in Jackson, Mississippi do is so frustrating to the audience that it could almost be considered cringe-worthy. That's what's so great about this movie: because it knows when to be taken seriously and when to be taken as a comedy. This could not have been done without the astounding cast on the screen.

Getting out of raunchy teen comedies and into the world of serious filmmaking is the gorgeous and always lovely Emma Stone. If you see this movie because you think that she's going to do something that she did in 'Easy A,' then go see some raunchy teen comedy that's playing. Stone plays Skeeter, an aspiring journalist who decides to do the unthinkable and interview these black maids only to find success and hatred. After seeing this film, you will know that Ms. Stone has the potential to go even bigger and become a regular awards contender. We saw what she could do in 'Easy A' last year, and that got her a Golden Globe nomination. As good as she was, the rest of the cast got better and better as you went down the cast list. Viola Davis gives a powerful performance as Aibileen, a longtime maid who has lived through a bunch of prissy women. She is great in this film, as yo feel her fear and anger with the white Jackson women. The two best performances in my opinion come from Octavia Spencer and Bryce Dallas Howard as Minny and Hilly, respectively.

Spencer knows how to play a humorous role in a movie, whether it's a small, strange role in 'Dinner for Schmucks,' or a sassy, big role in 'The Help.' Ms. Spencer knows when to bring the humor and sass, and when to bring the drama and pain in her portrayal of Minny. She in my opinion is the best character in this movie, and I believe that Ms. Spencer deserves at least a nomination for Minny. The other supporting character that deserves a nomination, but isn't as good as Spencer is Bryce Dallas Howard as the evil, bitchy Hilly. Even when it seems that she's being nice and kind-hearted, Hilly is pure evil throughout her presence in this movie. Ms. Howard, best known for her dismal roles in films like 'Spider Man 3' and 'Terminator Salvation' gives the performance of her career so far. Even though we still have the last third of 2011 left to see, Howard's portrayal of Hilly gets my personal award of 'Best Villain of 2011,' period. Yes, I am saying that Hilly is even more sinister than Lord Voldemort and Red Skull, among others, and those characters killed innocent lives. Hilly was just a sinister bitch, and that's all you need to make the perfect movie villain.

With fantastic acting, a funny/heartbreaking story, and the power of a racial background, 'The Help' is without a doubt one of the best films of the year. This movie has that rare combination in a movie where one second you'll be laughing, the next second you're crying. This is the only time this year where I came close to crying in my seat. Don't call me heartless, but I didn't cry at all in 'Toy Story 3,' so a film getting me close to crying in a movie is really an accomplishment for Hollywood. If this movie doesn't get nominated for any acting Oscars or Best Song, with Mary J. Blige singing the film's theme song "The Living Proof," then there may not be any justice this year when it comes to awards for great movies.

I have never seen 'The Color Purple,' but I have a strong feeling that this film might gain the popularity and acclaim that that movie had almost three decades ago. There was a film with a similar message that came out a few years ago called 'The Great Debaters.' This film, with superb performances and a heartbreaking/gruesome storyline wasnn't considered for anything at the Oscars. I hope that with the message in this movie and the response that the audience will give it, 'The Help' will get some recgonition come awards season. For a film that came be so light and so dark at the same time, 'The Help' is one hell of an extraordinary film, period.

Posted by Zachary Marsh at 8:09 AM