REVIEW: Rise of the Planet of the Apes 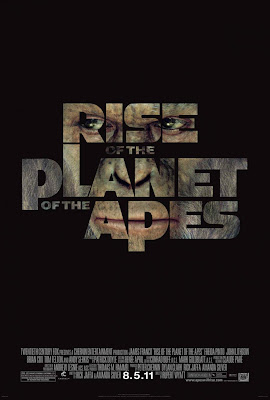 Those damn dirty apes are back after Tim Burton messed their world up back in 2001.  However fate was on this reboot's side as they have an all star cast including Oscar nominee James Franco and the always fantastic Andy Serkis, as well as using the same technology used to bring the Na'vi to life back in 2009 with the groundbreaking 'Avatar.'  Considering the amount of talent that was in this, and the fact that this was branching off one of the most popular movie series' of the 20th century, this movie is a disappointment in many ways.  The actors weren't used very well, the story didn't go into many different paths to become a bit more intriguing, and they used the "damn dirty apes" line for no reason other than it being a reference to the previous films.

However, I was captivated by the apes in this movie, especially the main ape Caeser, played to perfection by Andy Serkis.  Also, the fact that the ape takeover started from an experimental drug to cure Alzheimer's was very interesting storywise, and I would've liked to have gone further into that.  If you go into this expecting an action-packed apocalypse type movie, then you're seeing the wrong movie.  'Apes' is only interesting for the storyline of Caesar and the apes that join his rebellion.  Because of that one reason, and because John Lithgow is great in this movie, I would recommend this movie to people.
The best thing to come from this movie, besides the film's astounding special effects is the motion-captured performance of Caesar, played by Andy Serkis, an actor who's no stranger to motion-capture.  If anyone knows Serkis and what he's done in his career, then they should know that he played Gollum in the 'Lord of the Rings' trilogy, and 'King Kong' in the 2005 remake, both directed by Peter Jackson.  So having some knowledge of what this actor has done previously, you will go in expecting another great performance from a great actor.  What was great about his performance was that even though he looked and acted like an animal for most of the movie, in his mind he knew that he was different from the other apes, and the audience will see that as if they are in Caesar's eyes.  Serkis' performance as Caesar could really get a good buzz going for him when it comes to awards season.  Personally I don't see the performance as being Oscar worthy, but I wouldn't be surprised if he gets nominated anyway.  Caesar is what makes what could have been a cheesy movie with apes running around the place and learning new things.

James Franco, even though he was good in this movie, wasn't at his quality best, like he was in many other films he was in.  All I think Franco did for most of the movie was screaming "Caesar!" to catch the ape.  Any actor in the business can scream "Caesar" at the top of their lungs, but it won't make the performance as good as it should be.  The supporting cast included Freida Pinto, who played Will's girlfriend, and Tom "Draco Malfoy" Felton playing the jerky captor.  Pinto, best known for the Oscar winning film 'Slumdog Millionare' does absolutely nothing in this movie to add to the story, other than warn Will about the possible destiny of the apes.  Come to think of it, I think that she only had about 5 or 6 lines in the entire movie, believe it or not.  As for Felton, I'm not sure which agent he has, but he may want to fire him or her, because the first role he has outside of the 'Harry Potter' series is no different than the jerky Draco Malfoy that he grew up playing for over a decade.  Out of the entire supporting cast, the most powerful performance comes from John Lithgow, who plays Will's father who has Alzheimer's.  You really feel for this guy when he has the disease, and feel his "being lost" situation being as real as anyone who has Alzheimer's in real life.  We're supposed to care for our human characters in movies like this, but even though we were on the apes side throughout the film, the humans could have been developed much better than they were in this movie.

The movies released in the month of August for some reason go into a major funk and are disappointing most of the time.  While I don't find this movie to be terrible, I find this movie to be caught into the August funk, with weak acting and a story that isn't that interesting after 50 minutes into the movie.  The previews showed a lot of action with the apes and humans fighting against eachother on the Golden Gate Bridge.  I want to tell you now that the action in this movie doesn't even begin until about 65 minutes into the movie, and lasts for the last 40 minutes of the movie.  If you're going into this expecting an intense action summer movie, you will be disappointed.  However for what was in it, the action was pretty cool.  Seeing the apes desroy the Golden Gate like their's no tomorrow was quite something to see, especially remembering that these apes are really people in suits with dots on their face and a microphone to their mouth.

I don't think that this movie deserves an 80% on Rotten Tomatoes, but it is something to see if you didn't like or did like 'Captain America' and 'Cowboys & Aliens.'  This is a different summer movie, and it's in some ways unique for that.  I would only see this movie again for the performance of Andy Serkis.  Even if you don't like this movie, you won't be able to deny that Serkis is fantastic as Caesar.  So if you want to see something enjoyable enough to wind down the summer movie season, then go witness the 'Rise of the Planet of the Apes.'  Well, you could also see the sexy, raunchy, poop joke filled comedy 'The Change-Up' instead, but I've heard mixed reactions on that.


The Girl With The Dragon Tattoo

Posted by Zachary Marsh at 1:00 AM