REVIEW: The Adventures of Tintin 3D 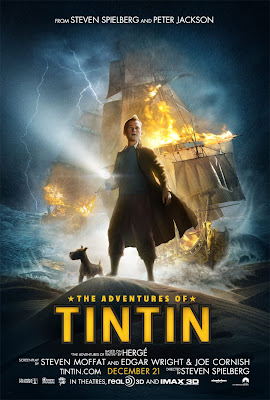 MOVIE
The Adventures of Tintin

The last time Steven Spielberg brought a directorial project to the big screen was 'Indiana Jones and the Kingdom of the Crystal Skull' back in 2008. I'm one of the few that enjoyed 'Indy 4,' but others loathed it so much that Spielberg himself apologized for it. Three years later, the director of classic films like 'E.T.' and 'Close Encounters' is bringing an old Belgium comic book to theaters in spectacular 3D/motion capture fashion. This series was called 'The Adventures of Tintin,' and this film goes under the same name. This series of books is extremely popular in many parts of the world, but it really never got its way around here to the US. In fact, Spielberg was notified about the 'Tintin' books when a reviewer of 'Raiders of the Lost Ark' back in 1981 compared 'Raiders' to 'Tintin.' So 30 years have passed since then, and Spielberg is finally bringing 'Tintin' to the States.

This movie has been playing in every other part of the world for about two months, so the question is if it can do solid business here in America and be enjoyed by those who have never even heard of this series before. The answer to that question is yes, it will be enjoyed by Americans. Sure this isn't among Spielberg's many classic movies, but it is still an enjoyable and fun ride that will have people laughing, thinking, and staring in awe at the spectacular 3D. 'The Adventures of Tintin' may not be the best animated movie of 2011, but it sure is one of the better Spielberg movies of the 21st century. Note to George Lucas, this is what 'Indy 4' should have been.

Tintin is a British newspaper reporter/crime solver with his loyal dog Snowy always at his side. One day at a flea market or something, Tintin comes across a mysterious ship called "The Unicorn" and he decides to buy it, despite warnings and offers from two different strangers. All of the sudden Tintin gets whisked away from his normal life and into the hands of a madman who for some reason is looking for other versions of this ship. Apparently there was a treasure hidden in "The Unicorn" for centuries and the clues to find it are in these mysterious ships, so Tintin sets out on a worldwide exploration to find the treasure and discover the quote on quote "Secret of the Unicorn." Tintin is accompanied also by Captain Haddock, a drunken captain who knows more about "The Unicorn" than he even realizes.

Motion Capture hasn't exactly been perfected to the fullest yet. Robert Zemekis started using it with all of his most recent films, like 'The Polar Express' and 'Monster House.' Unfortunately the technology eventually bit Zemekis on the butt after the 2011 stinker 'Mars Needs Moms' failed to resonate with anyone. In fact, the only times in the past decade where motion capture was used to perfection had Andy Serkis playing a role wearing the motion capture suit during filming. 'Avatar' was also able to revolutionize both the 3D and motion capture technology back in late 2009. Spielberg made a very smart choice using motion capture because he could both shoot the film as if it was a regular adventure movie, and recreate Herge's drawings to make them look true to the comics. It's because of today's technology that this film thrives with vibrant colors and eye popping visuals. Spielberg was also smart to shoot this movie in 3D. While sometimes the movie looks flat and more like a 2D film than 3D, that is all made up for in the action scenes and landscape shots that suck you into this magical world that only a true artist can think of. You don't have to experience 'Tintin' in 3D, but you won't be disappointed if you do.

A motion capture movie involves more than just an actor recording sound from a microphone. Really what happens is that the actor/actress playing a character has to put on a special suit and get green dots glued to their face, and they act out what a character is doing as if they were filming a live action movie. In order to perfectly execute this, you need the right cast of actors to pull off the part. Jamie Bell, who's most notably known for his child role in the film 'Billy Elliot,' plays Tintin. Bell is great playing Tintin, knowing to have the optimism of any great adventurer and the mind of any great crime solver. Even though you can barely recognize Bell because he looks exactly like Tintin, there is nobody out there in this day in age that could possibly play Tintin. The same goes for Captain Haddock, played by the motion capture master Andy Serkis.

Serkis is on a ball this year, even still getting Oscar buzz for his portrayal of Ceaser in 'Rise of the Planet of the Apes.'  With Haddock, Serkis is able to play something I don't think we've seen him as before: a likeable, drunken ship captain.  The combination of the talented Serkis, the magic of motion-capture, and the personality of a hardcore drunk (Jack Sparrow, anyone?) alone guarantees an awesome time thanks to an extraordinary actor.  Daniel Craig plays the antagonist of the film Ivan Ivanovitch Sakharine, and he's good I guess.  Sure he was a cool villain, but there was just something about Craig's performance that didn't fully suck me into his character.  I did want to see more of the Simon Pegg/Nick Frost bumbling duo Thomson and Thompson, who had screen time for 10-15 minutes.  Still they had their moment and they did what they had to do, so I just sat back and enjoyed the ride.

People everywhere have been having many problems with the storyline, which involves things like vengeance, pirates, and ancestry.  Honestly, I didn't mind it at all.  The purpose of the story is to turn your brain off and just enjoy the ride. I get that the story was very clichéd and predictable, but adventure movies are supposed to be clichéd and predictable. The writers of the screenplay are Steven Moffat, (first time film screenwriter) Edgar Wright, (director of 'Scott Pilgrim vs. The World') and Joe Cornish. (director of 'Attack the Block') While the script could have dazzled us more like Wright and Cornish's previous films have, but they do help make the film a lot of fun, and something we've never really seen before. To the fans of Wright and Cornish's previous movies, the closest thing you'll get to their style of filmmaking is a twisted mirage scene taking place in the desert, which by the way looked awesome in 3D.

While this animated epic isn't in the leagues of 'Raiders' or 'Jaws,' 'Tintin' is certainly better than 'Indy 4' and 'Hook.' The cast is perfectly cast, the story had its moments but was still fun, and the 3D was good but passable. It's going to be very interesting to see how well this movie is received here in the US, because I doubt many kids in the country know who or what 'Tintin' is. Sure it may appeal to kids and adults, but the question that lies is: will this film make any money here? I think that if families are interested enough, then this will do decent business here. The only warning I'd give to parents is that kids under 9 are bound to squirm in their seat once or twice. Still, this is a fast, fun, and sleek family movie that could be the perfect introduction to 'Indiana Jones' for kids. There are talks of a sequel to this film if Paramount and Sony get their budget back and more. Well they already got the budget back from the rest of the world, so put me on board for a sequel to this flick. 'Tintin' is a fun movie, so check it out with your friends or family and have yourself a great time when you travel into timeless Europe.