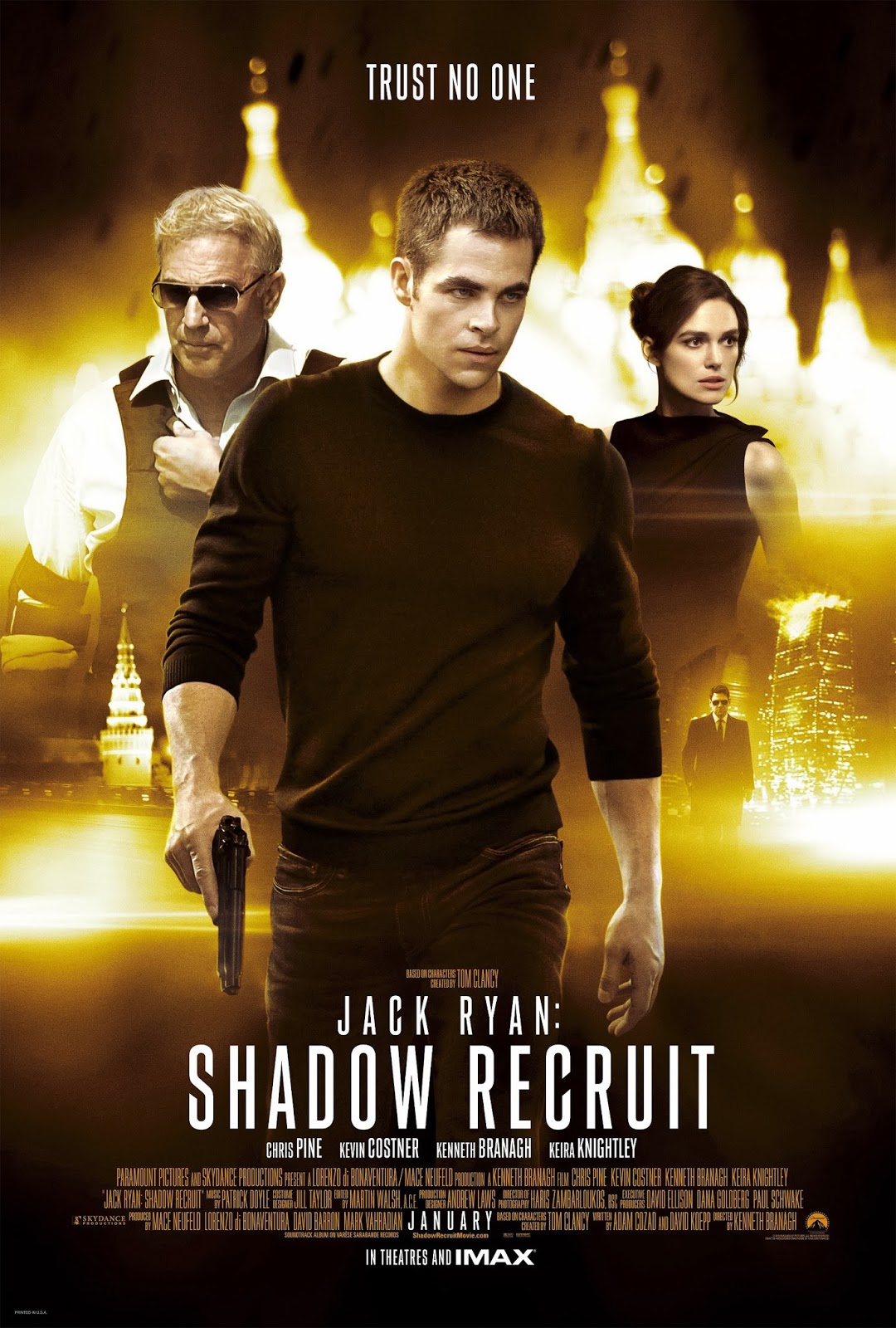 I've always liked Chris Pine as a leading action man.  Ever since "Star Trek," he reminded me of a combination of a young Tom Cruise and Robert Downey Jr.'s "Tony Stark" persona, which is a good thing.  It makes me happy personally to see that Pine is getting more leading man roles, and frankly, the character of Jack Ryan fits him like a glove.  While Pine is perfect as the title character, "Jack Ryan: Shadow Recruit" is far from a perfect movie.  It gets cheesy and drags a bit at points, but overall it's an incredibly entertaining popcorn flick that should bring in those looking for a fun movie to see now.  "Jack Ryan: Shadow Recruit" plays out like any typical action flick, but thanks to the solid performances, great direction from Kenneth Branagh, and some incredible action sequences, it makes out to be an overall entertaining movie that's the perfect film to see in the month of January.

After being critically wounded from an accident in Afghanistan and going through extensive physical therapy to be able to walk again, Jack Ryan is secretly recruited into the CIA as a covert analyst.  Ten years later, Ryan has a beautiful fiancé, a great apartment in New York City, and a solid job on Wall Street.  However, it is when Ryan discovers a plot by the Russians to destroy the US economy that grabs his and the CIA's attention, and thus he is flown to Moscow to prevent this economic war from happening.  It is this very trip that not only puts Ryan's life into jeopardy and the US at a great risk, but is also brings Ryan's fiancé along for the ride when she shouldn't even be there in the first place.  This film basically is a remake/modern origin story of the popular Tom Clancy character.

The acting all around the board is overall solid.  As I mentioned earlier, Chris Pine is a great leading man who has the same type of charm that Tom Cruise and Robert Downey Jr. have.  It's great to see him branching out of the "Star Trek" franchise to try to become more than just James T. Kirk and rather a big Hollywood movie star.  Kevin Costner, who seems to be making a comeback in the film world, looks like he's having a fun time playing this secretive CIA member who originally recruits Ryan into the business.  Keira Knightley and director Kenneth Branagh sport believable accents (Knightley dons an American accent while Branagh has a Russian accent) and both also seem to be enjoying their time in the film.  There's nothing spectacular in the acting department, but all of the leads do solid jobs as their characters.

Branagh definitely has a talent behind the camera, as the scope of this movie is large and feels big.  It makes sense as he is the man responsible for bringing "Thor" to the big screen.  The action scenes are well shot, and even a lot of fun to watch.  The story might be predictable, but I liked how they incorporated 9/11 and Afghanistan into the beginning of the film, and I like the overall adventure that Ryan goes on.  The movie as a whole is nothing but pure popcorn fun.  It gets a tad slow at times, plus the script isn't entirely clever or fascinating, but thanks to the cast, its faithful director, and some well done action scenes, "Jack Ryan: Shadow Recruit" is a fun thriller that is the perfect film to kick off 2014.  Let me rephrase that: it's the perfect GOOD movie to kick off the new year.  And let's face it, there are rarely any good films released in January.

Dawn of the Planet of the Apes