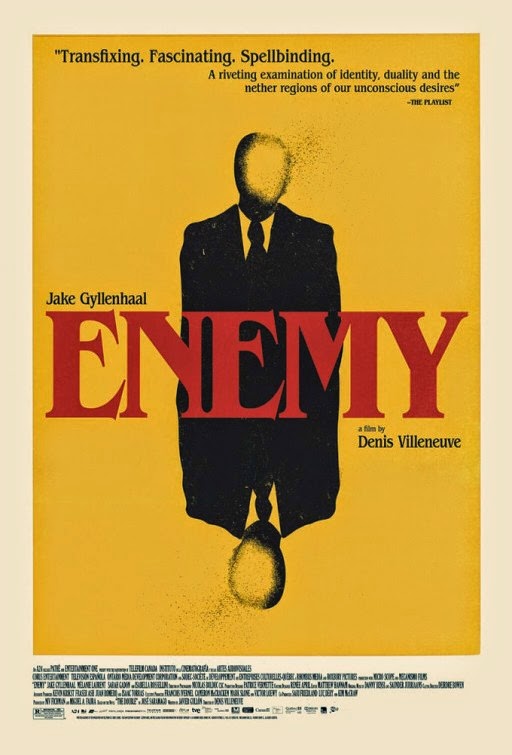 The first time I was exposed to the concept of a "doppelgänger," or an identical double of a living person, was through the TV show "How I Met Your Mother."  While on that show the concept was played towards a comedic approach, the whole idea around it is extremely interesting.  That's one of the reasons why "Enemy" really intrigued me.  Starring Jake Gyllenhaal and brought to us by his "Prisoners" director Denis Villeneuve, this movie shows what happens when two men, one a timid History teacher and the other an aggressive C-list actor, become a part of each other's lives and start wanting things that they couldn't have as themselves.  From start to finish, "Enemy" had my undivided attention, and it left me impressed, speechless, and confused all at the same time.

Jake Gyllenhaal shows so much range by playing two characters who are practically polar opposites.  Adam, the timid History teacher, is a quiet and nervous person who only finds joy in the three things he does everyday: teach his History classes, drink wine, and have sex with his girlfriend.  Anthony, the eccentric movie star, is more out-going and prone to going out and getting what he desires, even with a pregnant wife at home.  Their first encounter is extremely fascinating to watch, for Adam regrets tasting the forbidden fruit and Anthony craves more of it, thus creating this tense feel and environment for the rest of the film.  Both sides of Gyllenhaal in this movie are extremely fascinating to watch and overall make one hell of an amazing performance and maybe even a career landmark for him.

After impressing many, including myself, with "Prisoners," Denis Villeneuve has made a film that's not only superior to "Prisoners," but is also more tense, shocking, and attention-grabbing.  He, along with screenwriter Javier Gullón, created a dark and somewhat realistic universe that shows humans in their truest forms: as flawed individuals.  Both characters played by Gyllenhaal are flawed in the ways where the other isn't, and yet their flaws lead both of them down some dark paths.  I've never read "The Double," the book that this movie is based on, but I am extremely intrigued to do so now despite the claims that it's a hard novel to read.

Based on the way the film is written, acted, and executed overall, the end of the movie will have you scratching your head and wondering what the hell just happened.  The thing about that is that was kind of the whole point.  The movie itself is like being given all the pieces of a puzzle and all you, the viewer, needs to do is to put the pieces together.  This, of course, would require multiple viewings, which I see as a great thing personally.  I honestly could find nothing wrong with this movie, and I cannot wait to revisit this again.  "Enemy" is a smart, dark, and superb thriller/character study with two incredible performances from Jake Gyllenhaal, a well-written script from Javier Gullón, and great direction from Denis Villeneuve.  Seek this film out if and/or when you can, because it's a mind-bender that one should allow to mess with their mind.