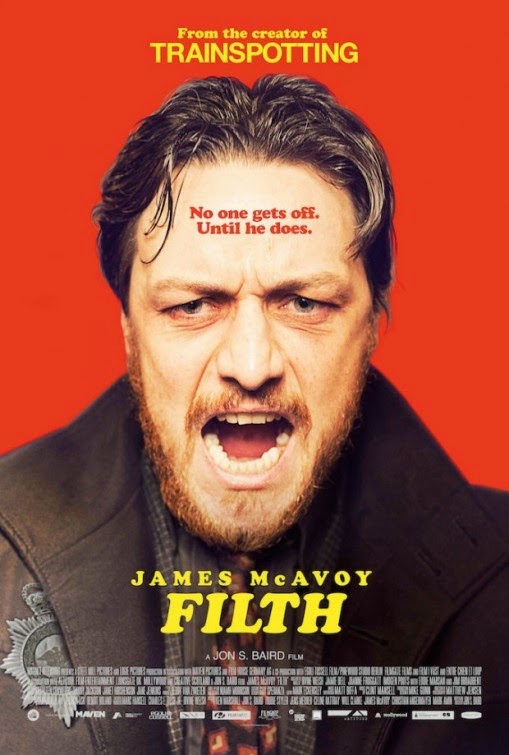 From mainstream films like "X-Men: First Class" and "Wanted" to smaller films like "The Conspirator" and "Trance," James McAvoy gets the job done every time, and manages to choose great projects to be a part of at the same time.  In his latest film "Filth," McAvoy dons a heavy Scottish accent to play Detective Sergeant Bruce Robertson, a manipulative, drug-enfused, sex crazed, psychopathic cop who will do whatever it takes to get a promotion and become "Detective Inspector Bruce Robertson."  To be perfectly honest, this was one of those movies that I was really excited for ever since July of last year.  Now that I have actually seen the insanity that indeed is "Filth," I have to say that it was far from the film that I was expecting.  I expected it to be a lot funnier and not as dark and twisted as it was.  Having said that, the dark-nature of the film really added to the experience, and overall made this insane character study a lot better in quality.  "Filth" is cruel, unapologetic, twisted, and insane, but it is so damn entertaining at the same time that I can't help myself from recommending it.

To say that McAvoy gives a great performance here is an understatement.  Not only is his performance sublime and entrancing, but it also may very well be the best performance he's ever given on screen.  The character of Bruce Robertson is vile, sadistic, and cruel, and yet he's so into the role and he's so whacked out of his mind that it's hard not to be entertained by him.  In a way, McAvoy's portrayal of Robertson makes Leonardo DiCaprio's portrayal of Jordan Belfort look subtle and tame.  This is honestly the type of performance that would get someone at least an Oscar nomination, but considering that not a lot of Academy members will see this film, that probably won't be in the cards.  Nevertheless, McAvoy in this movie is crazy, bonkers, and extremely entertaining to watch.  Same goes with the rest of the cast in the film.

Jamie Bell give a crazy performance playing a work colleague of Bruce.  Almost every scene with him involves drugs or profanity, and when he's snorting cocaine, it is great to watch.  Eddie Marsen from "The World's End" plays McAvoy's loyal and gullible best friend, and his performance is both sad and fun to watch.  There are more subtle and laid back performances that come from people such as Imogen Poots and Joanne Froggatt, and they work really well with Bruce's insane persona.  And in the middle of it all, Jim Broadbent is playing Bruce's doctor, who is usually shown to be some sort of crazy spiritual guide in Bruce's drugged up mind set, and he is just flat out awesome being this mad doctor of sorts.  Overall all of the performances are great, but this is McAvoy's film, so there's really no competition against him.

Screenwriter/director John S. Baird has made one hell of a crazy movie.  It's darkly funny at one moment, serious the next, and as a whole is unapologetically absurd and twisted in the best ways possible.  There are twists and turns that happen in this film that not only are insane and crazy, but also explain certain things that come and go in the film.  Plus, the way he's able to create these bizarre and strange scenes all over Scotland is something that true artists can do.  I've never read the book that this film is based on, but after seeing this, I will surely be doing that sometime in the future.

If films like "The Lego Movie," "Divergent," and "The Grand Budapest Hotel" don't tickle your fancy, then I would suggest taking a chance with "Filth."  It is whacked out of its mind and may very well be the craziest movie you will see in 2014, unless something else comes along, but man oh man, this is such a fun and twisted time.  James McAvoy gives the performance of his career, the script and direction really set the tone and makes this film even crazier than it should be, and the film itself is appalling and bonkers.  I know I'm repeating myself, but that's really the best way to describe this movie: bonkers.  I don't think I will see a more unapologetic film this year, and if there is a movie that is crazier than this, then god help us all.  "Dom Hemingway" came close to being as crazy as this, but where that film had the audience sympathizing with its titular character, this one has us appalled and dropping our jaws with almost every thing he does that impacts the people around him.  Expect a huge cult following to come for this movie, that is if enough people manage to bestow their eyes upon this piece of insanity.