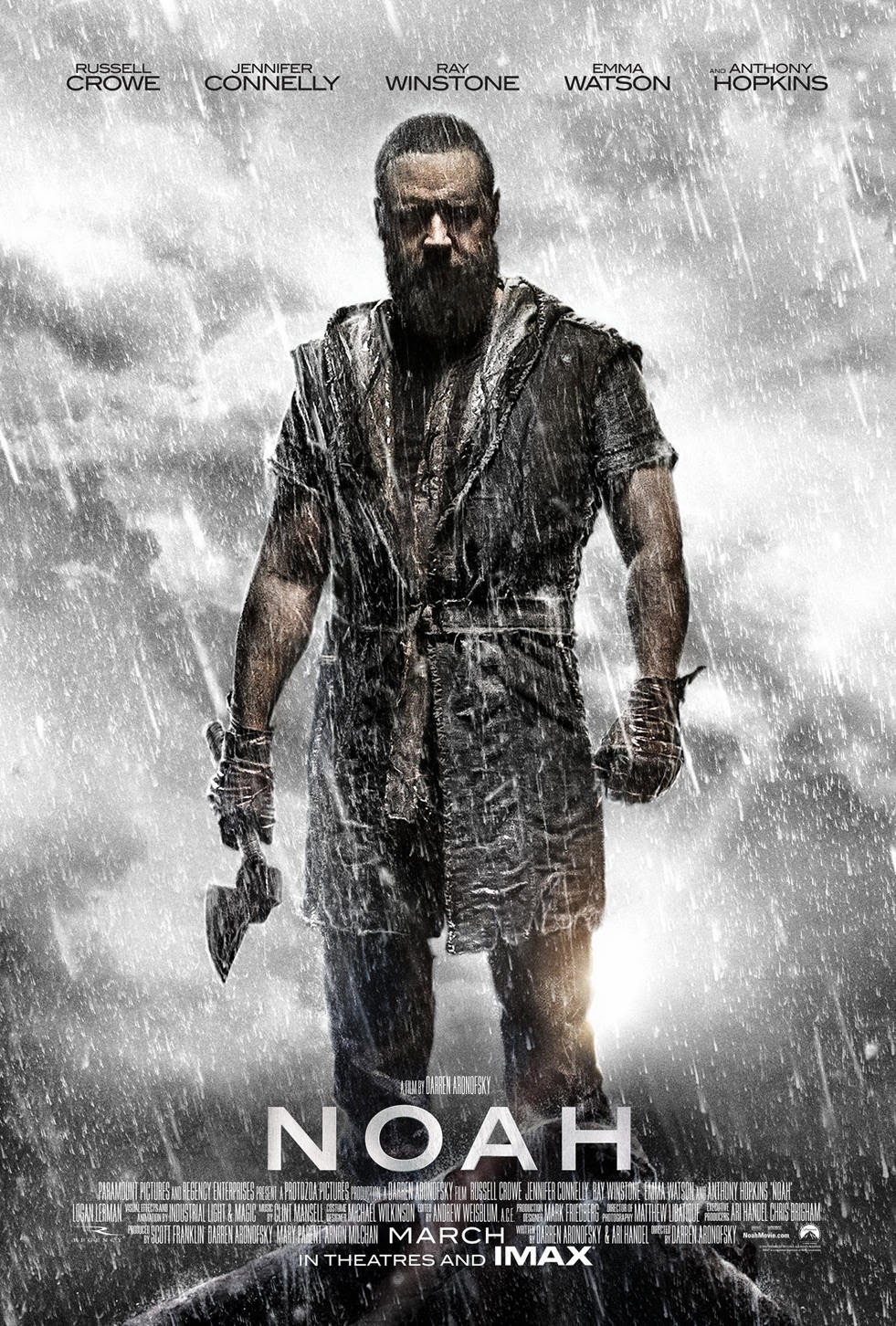 It's kind of fascinating for me as a Jew to see this country react to things that involve the Bible.  In the case of "Noah," the Christian community has been very divided due to exactly HOW faithful it is to the original story.  Director Darren Aronofsky, whose past films include the highly disturbing "Requiem for a Dream" and "Black Swan," co-wrote the screenplay with Ari Handel and merely based their script on the original story.  Having not actually read the entirety of the Noah story from Genesis, I have to say that I was captivated by this film all the way through.  This is one of those rare religious films that can be seen and even enjoyed by all who are able to open their minds and allow a different take on a Biblical story to take place in front of them.  While it's a little slow in the second half, "Noah" is a powerful, breathtaking, and incredible movie that I didn't expect to enjoy as much as I did.

It seems like in his last few movies, Russell Crowe has played one of three things: 1.) the jerk and/or bad guy, 2.) a man who likes to sing, or 3.) all of the above.  Believe it or not, Crowe goes back to Option 3 once more, though he sings and acts like a jerk at separate times in the film.  Don't get me wrong, he's really good in the movie, but it just seems like Crowe loves to play a guy that the audience can dislike, and the character of Noah is extremely unlikable for reasons I won't explain in the movie's second half.  As for the standout of the movie, that title unquestionably goes to Emma Watson.  This is possibly her most emotional and her most revealing performance to date, giving Hollywood a reason to cast her in more serious and dramatic roles.  Among the rest of the stellar supporting cast is Anthony Hopkins, Logan Lerman, Jennifer Connelly, and Ray Winstone, who all are really good in the film despite some performances being stronger than others.  There really aren't any bad performances present here, as everyone is believable and powerful overall.

Having never seen any of Aronofsky's previous movies, I can surely say that I loved the way he portrayed this grim and dark, yet beautiful and fairy-tale-esque, world in the film.  While the visuals aren't as stellar as something like "Gravity," they help to benefit the grand and epic scope that this movie possesses.  Along with the epic scope and the great direction, I loved how Aronofsky and co-writer Ari Handel took this Biblical tale and made it their own, so to speak.  Knowing the basic outline of the original story, I loved how the story didn't end with the Ark and the flood, rather we got to spend another hour with Noah and his family dealing with their predicament.  While I wasn't totally buying how Noah was portrayed as a heartless jerk, I loved everything else they did, and I even liked how Noah sort of came to redeem himself in the end.  Trust me, that's not spoiling the real juicy bits of the movie.

It's kind of funny to think that we live in a world where Christian audiences will praise movies that glorify their beliefs like "Son of God" and "God's Not Dead," and yet when a movie like "Noah" skews a little away from the original source material, controversy explodes amongst audiences.  As a Jewish audience member, I was entranced by watching "Noah," and I loved how Aronofsky and Handel made the story grimmer and more unique than most Biblical films.  This film, to this generation, is what Cecil B. DeMille's "The Ten Commandments" was to the 1950s.  I have a feeling that this movie will carry on throughout the years as one of the best religious movies of the 2000s.  "Noah" is a movie that is bold, ambitious, dark, and beautiful, and I loved nearly every second of it.  Jewish audiences may love this movie, but then again they may be as divided as Christian audiences has been, so my suggestion is to see this movie and judge it for yourself.

Posted by Zachary Marsh at 1:09 AM