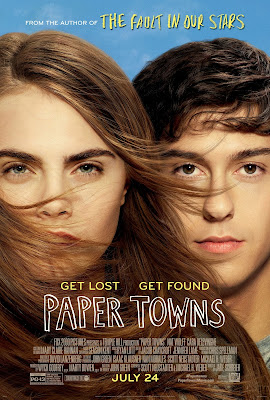 Last year, director Josh Boone helped author John Green bring his beloved teen novel "The Fault in Our Stars" to the big screen.  Teens, audiences, and critics alike all fell for the cancer-centered drama starring Shailene Woodley and Ansel Elgort.  With Fox believing they have struck a gold mine, they decided to adapt another one of Green's novels as a film.  That novel comes in the form of "Paper Towns," a story of a boy traveling cross-country to find the girl he's in love with and profess his feelings to her.  Considering my love for "The Fault in Our Stars," I can say that I was pretty excited to see what John Green had in store for us next.  While the result wasn't as strong as "Fault," there are still a lot of things to like about this movie.  Nat Wolff is a solid lead, the film itself is relatable, and the story always had my attention despite some unexplained plot points and some annoying supporting characters.  At the end of the day, "Paper Towns" is a step down from Green's previous work, but it's still a good movie overall.

We Are Your Friends

The Maze Runner: The Scorch Trials

Posted by Zachary Marsh at 2:34 PM