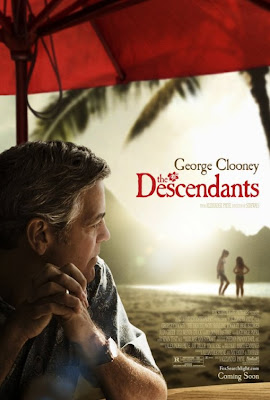 If director Alexander Payne, well known for films like 'Sideways' and 'About Schmidt,' decides to come out of a six year long hiatus and make a film starring George Clooney, then expect it to be in the running for many top awards. That is the case with the new film 'The Descendants,' but the only difference is that this film doesn't disappoint on any levels. Clooney plays Matt King, a lawyer whose family owns a huge, yet untouched 25,000 acre area in Hawaii on the island of Kaua'i, and he is the sole owner of the land. His family wants to sell the land, but he's too frustrated to even think about it. What's stressing King's life much more is that his wife is in a coma and his oldest daughter has made a complete mess out of her life. King is trying to cope with the fact that his wife's coma will never be lifted when his oldest daughter shares a very disturbing secret: his wife was cheating on him with a man of real estate business. Ever since the film's premiere at the Telluride Film Festival back in September, non-stop praise has been circling this film and the love has been ever growing. For those who have been on the fence on whether or not this film lives up to the hype, take it from this 14 year old that it certainly does. You will laugh, and you will just feel your heart sink to your stomach. 'The Descendants' is a marvelous dramedy that has the power to captivate anyone who goes to see it.

George Clooney will without a doubt get a lot of awards consideration in the next 2 months. His portrayal of a father still piecing together why his wife would cheat on him feels both authentic and real. There is only one other Clooney film I've seen in my lifetime and he had nipples on his suit. This man deserves some serious award recognition for his performance, maybe even a win. Sure Brad Pitt's narcissistic baseball manager performance was great, and Jean Dujardin's entirely silent performance is fantastic, but Clooney is the only actor this year whose character can make you feel bad about the way you've treated people in your own lives. If any actor can do that to me, then they have my support during awards season.

The real shining star of this movie is Shailene Woodley, who plays Clooney's messed up daughter Alex. I went into this film with an open mind on her because I have never seen a single episode of the show that made her famous, 'The Secret Life of the American Teenager.' After this film was over, the first thing that came to my mind was indeed Woodley. It's not because she's attractive, (although she is, I must say) it's because her performance is so damn good. There has been Oscar talk for her performance in this film, and my god is it well deserved. Her character in the film resembled the anger and frustration every teenager has when they're struggling not just with family, but with personal things as well. She is the perfect yang to Clooney's ying, though it all does turn around in the end as expected. Woodley is what I like to call the Hailee Steinfeld of 2011, which means that she has all the potential to win the Best Supporting Actress at the Academy Awards, but unfortunately won't because of age discrimination. Still, her performance in this film feels so real and authentic, and on top of it all is sublime.

This film is a great example of when an entire cast, both lead and supporting, are all fantastic in their parts. A newcomer named Nick Krause plays Alex's mysterious boyfriend Sid. There are moments in this film where you will just stare in shock at what is pouring out of this guy's mouth. You'll wonder to yourself, is this guy an asshole or just a hopeless idiot? That is why the character works so well for the film, and somehow everyone turns to actually like him in the end. Beau Bridges plays one of George Clooney's cousins on the Hawaiian Islands, and he is very good in the 2 scenes he's in the film. Judy Greer is in the movie for three scenes, and she too is very good. Matthew Lilliard, Shaggy from the live action 'Scooby Doo' movies even makes an appearance for one scene, and he surprisingly is really good. Overall, everyone in this film add up to a fantastic ensemble cast, which happens to be run by George Clooney and his fantastic acting chops.

To be fair, I have never seen any Alexander Payne films before, so this was my first go around with his work. Luckily I made the right decision to check this movie out for many other reasons. It's that time of the year where people start pointing fingers to what films will eventually win the top prizes at such ceremonies as the Golden Globes or the Academy Awards. For the past couple of months, I have been rooting for 'The Artist' to take home all of the gold when February comes. After seeing this movie, I'm not entirely sure what should be declared the best movie of 2011 in the end. This is a poignant, funny, and irresistible movie that has the ability to hold an entire audience's attention for two hours, despite a couple of slow parts. It's not the happiest movie or the funniest movie you will ever see. Hell, it's not even a movie for every audience out there. However, the talent of the actors, along with Payne's visceral and real vision of a typical Hawaiian life sucks you in and makes you think about the problems going on in your life. (If there are any) For a truly authentic and real experience at the movies in 2012, you may want to go with Alexander Payne’s ‘The Descendants.’ If you come out of this not having any reflection on your personal life, do you even have a conscious?