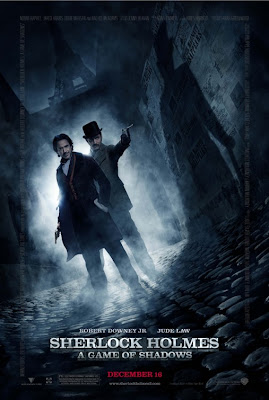 Who would have thought that 'Sherlock Homes' would get a sequel? I didn't think that at all, but I'm sure glad Warner Brothers decided to bring Robert Downey Jr. back into the iconic role that really helped Downey become a superstar again. Jude Law and Rachel McAdams (in a 10 minute role) both return for more action and more wittiness from the genius/notorious detective. This time, we have Noomi Rapace (the original Lisbeth Salander) in her first English role, and Jared Harris as Holmes' most notable nemesis, Professor James Moriarty. Being a fan of the 2009 film, I was more than excited to see what director Guy Ritchie could do next. Unfortunately, the turnout here is that 'A Game of Shadows' is not as good as the original, despite some solid acting, cool action scenes, and a fantastic final 10 minutes. 'Sherlock Homes: A Game of Shadows' is a disappointing sequel, but it is still solid fun.

The best part of the 'Sherlock Holmes' films will always be Robert Downey Jr. Like Tony Stark in the 'Iron Man' films, Holmes is a narcissistic genius who only wants to defend the world from evil madmen. Anyone could have made Sherlock a kooky yet brilliant investigator, but Downey brings it up to the next level with some very funny jokes, a "let's get going" attitude, and a charisma that keeps both audience members and the characters in the film on board. Nobody has played Sherlock better in years. Jude Law is also good as the loyal but annoyed as hell Dr. Watson. Watson may just be the faithful sidekick to the much more interesting Holmes, but the writers of the script have made Law's Watson an awesome partner in crime who's involved in a spectacular action sequence on a train. Rachel McAdams also returns for the film's opening 10 minutes, but is disposed of seconds before the film's title shows up on screen. McAdams was actually pretty good in the first, so it's sad how she is barely used in this film at all. Luckily, the series' newcomers are very good and a true surprise.

I have never seen the Swedish 'Girl with the Dragon Tattoo' film, nor have I seen the entire trilogy or will be seeing the David Fincher adaptation. With that said, it should probably be guessed that I have never seen a film with Noomi Rapace in it, since this is her first English speaking role. Rapace plays a gypsy who may have the answer to Moriarty's evil plot. While she's not as exciting and fun as McAdams was in the 2009 film, Rapace is fun and cool with some decent acting chops and a badass action persona. The same goes with Jared Harris' James Moriarty, who is basically the exact opposite of Holmes, but equal in every way. Harris is not as cool and mysterious as Mark Strong's character Lord Blackwood; Moriarty is a much more devious character who is so intriguing that even his conversations with Holmes can send chills up your spine. The female sidekick and villain may not be as good as the ones in the 2009 movie, but Noomi Rapace and Jared Harris own their characters enough to be acceptable successors.

There isn't much of a plot in this film at all. If there was, then I didn't quite understand it very well. The summary of this film is the following: confusion, explosions, intrigue, and Robert Downey Jr. I wish there was more of a story in 'A Game of Shadows,' but this is a fun enough sequel to check out on the big screen. The visuals are spectacular as they should be in a big budget Hollywood film, especially in one scene involving the three main leads running through the woods. I know people who liked this new one much more than the first one, but I also have friends who saw this one and prefer the first one over the new one. Still, this is a fun big screen popcorn flick that will have people begging for more. Plus a new trailer for 'The Dark Knight Rises' is shown before every print of this film, so that's always awesome. (The 7 minute prologue is shown with the IMAX release of 'Mission Impossible: Ghost Protocol, not this film sadly)

Posted by Zachary Marsh at 5:20 PM