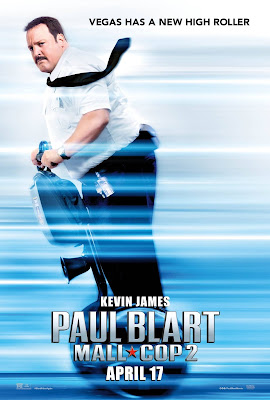 Let me ask you a question: Did you want to see a sequel to "Paul Blart: Mall Cop?"  Even if you enjoyed the film, did you actually want to see what this character did after the events of the first film? Well I didn't, and I enjoyed the 2009 original!  Alas, Kevin James wanted a paycheck and his buddy Adam Sandler wanted to make a quick buck with his Happy Madison company, so now we have "Paul Blart: Mall Cop 2."  After his wife divorces him after six days of marriage and his mother gets killed by a milk truck, and yes this is LITERALLY how the movie starts off, Paul Blart is depressed and is clinging onto his daughter Maya for dear life.  Things start to look up for Paul when he's invited to a mall cop convention in Las Vegas, so he and Maya head to Vegas for a fun and relaxing trailer.  Obviously, though, things aren't fun for the two as at the same exact time a bunch of criminals are trying to steal paintings from the hotel.

For all of the hate that Adam Sandler and his ensemble of friends get, I still believe they are talented and can be really good in films.  Unfortunately, they keep making these utterly stupid and pointless comedies that consist of predictable plots, bathroom humor, and fat jokes galore.  What makes this movie even more upsetting, aside from the fact that it merely exists, is that it throws out two of the previous film's central characters with cheap jokes, not to mention that Blart is a despicable and pompous human being here compared to the humble and loving version of this character we saw six years ago.  I would have really hated this film had it not been for a few moments that were so unbelievably stupid that I laughed, as well as this random character who sleeps a lot and has some of the strangest and yet most brilliant timing I've seen in a recent Sandler production.

It might have been that everything else was so bad that these minor bits of humor made me laugh more than I should have, but who knows.  I'm never going to watch this again, nor should you even try to watch it a single time.  Even if you enjoyed the first "Paul Blart," this isn't worth your time or hard-earned money whatsoever despite a couple of humorous moments.  Kevin James, you're better than this.  Adam Sandler, you're better than this.  Everyone involved with this movie, you're better than this.  Please stop making mindless crap for an easy paycheck.  Do the world this favor and I promise you we will forget that you guys played friends pretending to be a gay couple.  Well except for the people who really love "I Now Pronounce You Chuck and Larry," which is totally ok.

Posted by Zachary Marsh at 9:25 PM