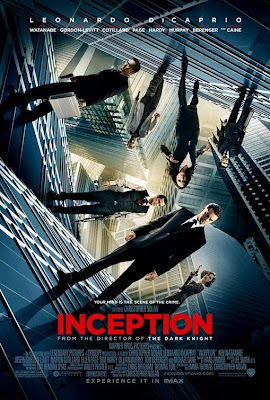 Well, it's finally here. After two years of waiting for the follow up film to the success of The Dark Knight, Christopher Nolan brings audiences all over the globe one of the most sophisticated, emotional, and best movies of 2010: Inception. If you want to read the synopsis, it's right ahead. But I'd recommend you not to since the less you know the more you'll enjoy the film. Dom Cobb is a skilled thief, the absolute best in the dangerous art of extraction, stealing valuable secrets from deep within the subconscious during the dream state, when the mind is at its most vulnerable. Cobb’s rare ability has made him a coveted player in this treacherous new world of corporate espionage, but it has also made him an international fugitive and cost him everything he has ever loved. Now Cobb is being offered a chance at redemption. One last job could give him his life back but only if he can accomplish the impossible—inception. Instead of the perfect heist, Cobb and his team of specialists have to pull off the reverse: their task is not to steal an idea but to plant one. If they succeed, it could be the perfect crime. But no amount of careful planning or expertise can prepare the team for the dangerous enemy that seems to predict their every move. An enemy that only Cobb could have seen coming. It's not just that the film was superior, it was also very complex and confusing. I can't give away too much, but this movie can be very confusing for the average moviegoers mind. But I can guarantee that It'll keep you thinking about it after you've gone to bed, and confuse you so much you'll have to either go see it again or read the entire plot through Wikipedia. But I would like to give props to Christopher Nolan, who has directed films like the recent Batman films and Memento for giving the world a very original storyline. I would also like to point out that the films visual effects are quite spectacular and should be recognized at awards season. Also, if you only know Mr. Nolan for the Batman films and you think that that's similar to this movie, then you are surely mistaking. This and The Dark Knight are completely different movies. So if you are either a huge movie buff, Christopher Nolan fan for his work on films like The Prestige or Memento, or a Leo Dicaprio fan, then check out a film from the point of the human mind. An idea like this can only be called an Inception. A darn good one, too.