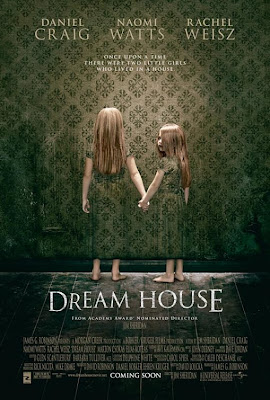 A buddy of mine wanted to check this movie out, so I decided to go with him for the sake of a review. 'Dream House' is about a family that moves into this house, and everything is not what it seems. This film is one of the many horror flicks to have come out during this year, including 'Don't Be Afraid of the Dark' and 'Scre4m,' yet it's also on the continuing trend of not being scary at all. This is actually the first horror movie I decided to check out this year, ('Attack the Block' was a horror/comedy, so it doesn't count) so I had high hopes for it. Despite having extremely mediocre reviews on Rotten Tomatoes, (an 8%) I went in with a positive attitude just waiting to be chilled to the bone. I didn't jump once in this movie, primarily because all three of the "jump" sequences were given away in the trailer.

The huge twists of the movie were also given away in the trailer, so there was really no point in going to pay to see this movie if you have already seen the trailer. That's one of the reasons why this movie isn't that scary: because all of the twists are given away in a matter of two and a half minutes! There was a decent movie in here somewhere, but it was locked away and raped to death because of the one trailer released for the movie. If you want to enjoy this movie in the best way possible, DON'T WATCH THE EMBEDDED TRAILER BELOW! If you have seen the trailer, that sucks because you might have actually enjoyed 'Dream House.' It's not a terrible movie, but it could have been much better, considering the fact that this was originally rated R by the MPAA.
The acting in this film isn't as bad as you think it would be, believe it or not. Daniel Craig gives it all he's got, and he plays his twisted part quite well. Rachel Weisz and Naomi Watts are also pretty good, but nothing special comes out of their performances. The characters do add a nice suspense into the story, despite the suspense already taken out by the trailer. I apologize for talking about the trailer so much, but it's the truth. Don't watch it, just ask a friend who has seen the trailer if it spoils the movie, where they will say YES. Enough said. Getting back to the cast, they were fine to see, but they weren't fantastic or Oscar worthy for the matter.

I wouldn't exactly call this movie a horror film at all. It's more of a mystery-thriller than a straight up horror flick. I kind of liked that about the movie, because it gives the viewer a thinking element needed during the hour and a half you'll be spending watching the film. There were some interesting twists in the movie that would have been great if, you know the rest. This movie is like a weirder episode of some dumb soap opera like 'All My Children,' where some twists are played out in a very interesting way. I swear there are only three jump scenes in this movie, yet they don't exactly matter because of the cheapness of them. There's no point of even having them because there's no addition to the film from the cheap scares. In fact, they were somewhat laughable to watch. When the little girl says "there's something outside, look over there," you know that in the next split second something will slam onto the window with everyone screaming in the end. Teens will like it because it makes them think of how crazy Daniel Craig's character might actually be. It's an intriguing concept with a good mystery element, but it could have been so much better.

The trailer spoiled it all, so if you saw it, there's nothing to see when you check out 'Dream House.' Once the twists of the movie have been unveiled, you know exactly what's going to happen in the end. That's why watching the trailer would be really stupid to do if you wanted to check this film out. The acting's fine but not great, the story is cool yet predictable, and the scares are dumb and very cheap. The mystery element of the flick was quite interesting, yet there was barely anything that can be put into the "horror" genre. Jim Sheridan not only directed 'Dream House,' but he is one of the most respected filmmakers in Hollywood. He was locked out of the editing room during post production on 'Dream House,' so I blame Universal for the mediocre marketing and the poor result of a film. If Sheridan was able to get the editing rights to his movie, then things might have actually been better than this.

If you want to see this, renting it with no knowledge of the movie is the safest route to go, because then you might actually really enjoy the movie. Any other way of seeing it is somewhat pointless. Why would you even want to watch a movie where you already know the important twists that are supposed to be kept secret? I knew the ending of 'The Sixth Sense' before watching it, but I still enjoyed it nonetheless. 'Dream House' could have been a scary as s**t mystery. However because of the poor marketing/editing, and the small running time given, I have to say that I walked out legitimately disappointed. Boo! Was that scary? I didn't think so.

The Girl with the Dragon Tattoo

Posted by Zachary Marsh at 6:45 PM