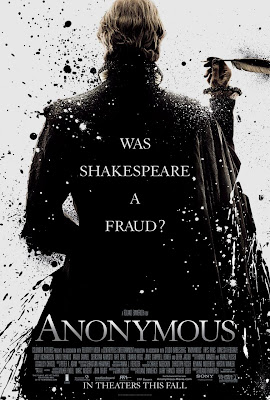 
Was he, or was he not? That, is the question asked in Roland Emmerich's (yes, the guy who directed 'Independence Day' and '2012') latest film 'Anonymous.' 'Anonymous' is about a possibly true past where William Shakespeare might not have been the author of his poems and plays. The true author, according to historians and the film itself, might have been Edward de Vere, the 17th Earl of Oxford. Unlike today, government officials writing plays and poems was considered a "sin" and "works of the devil" by even higher officials like Queen Elizabeth I and those snooty men persuading Queen Elizabeth to their side. Of everything coming out during Oscar season, this may be the most controversial film to come out because of the context of the story. But believe it or not, 'Anonymous' isn't exactly about the whole "Is Shakespeare a fraud?" story. The film really tells the tale of the scrambled lifetime of de Vere, which is filled with scandal, affairs, and of course, poems. The Shakespeare aspect of the film is more of a subplot rather than the main focus, mostly because the film shifts throughout time and characters at a somewhat confusing rate, which is one of the many reasons why I enjoyed 'Anonymous.' The movie is not for the average moviegoer, unless the average moviegoer can follow what time periods you're in at certain points. 'Anonymous' is a powerful, epic drama that is the perfect thinking film for a group of cinephiles, yet can be slow and confusing at certain points.

The movie opens with a man telling the story of the film on a stage in front of a big audience. We then transition into an event in the past, where we then go even further back in time throughout the movie. When we first visit these points in time, a title card comes up that say "five years earlier" or something like that. After that first moment into the certain points in time, we, the audience, is supposed to recognize characters at certain ages when we jump back to those times throughout the movie. This can be considered confusing by many upon a first viewing. Even people told me after the screening that it felt very confusing at parts. Let me put it to you this way: if you could follow exactly what happened in such recent films like 'Inception' and 'The Tree of Life,' then you may be able to follow along in 'Anonymous.' I personally felt that this added to the movie, because even though it didn't quite pin point what time you’re in at a certain moment, it still shows a troublesome and sickening past that belonged to the Earl of Oxford, which helps you feel for the guy when Shakespeare is getting the credit that the Earl is so deserving of. The emotional aspect might get drained out because of the confusing editing of the film, but nonetheless the emotion will get into some audience goers.

Got to love the British for being so damn talented, right? In fact, the entire cast I believe (including that narrator dude on a modern stage at the beginning of the trailer) is in fact British. Included in the cast is Rhys Ifans (Adrian from 'Little Nicky') , Oscar winner Vanessa Redgrave, and David Thewlis (Professor Lupin from 'Harry Potter'). Everyone in this film is fantastic, Ifans and Redgrave especially deserving of award nominations. It is hard to pick who exactly are the lead actors and actresses, because of the constant flashbacks and cuts to different characters throughout the film. I'd say that this is more of an ensemble cast film revolved around one of the most controversial subject matters in history. Possibly the best and sliest character of the film is in fact Will Shakespeare.

The movie depicts Shakespeare as being a womanizer, a drunk, and a bit of an ass. The guy who played him, Rafe Spell, gives off a bit of a Heath Ledger persona, which I found to be an added bonus to the character. Plus, Spell actually looks a bit like Ledger if you put two pictures of them together. Of course, there are those obnoxious Brits who say that plays and poems are "works of the devil" and such. The snooty characters in those shoes, while menacing, are a bit annoying and act like "creepers" for most of the movie. This is not a joke, mainly because there is this one guy, who happens to be the son of David Thewlis' ass of a character, is just coming into the room looking like he has a Hunch, Ba-dum chi, trying to look like a combination of a Hunchback and Crispin Glover in 'Alice in Wonderland.' Other than the creepers being good yet annoying, the cast is quite excellent.

Director Roland Emmerich made the wisest decision of his career with 'Anonymous.' He has gone from making visually astounding but incredibly stupid disaster films to a real work of art. Sure this film may not do as well financially, especially due to its artsy yet epic feel, but it is a good time nevertheless. The performances are excellent, the script (written by John Orloff) is well written/smart, and Emmerich's wide scope fits well into what could have been a boring drama about the Shakespeare conspiracy. There was only one other conspiracy movie to come out this year, and that was Robert Redford's 'The Conspirator,' and that was about whether Mary Surrat was guilty or not about participating in the Lincoln assassination. Out of those two, this is clearly the better one, and more seductive one.

Just like Queen Elizabeth with the Earl of Oxford, this movie will lure you in and take everything you have, while you get a sense of pleasure about it. 'Anonymous' may be hard to find this fall, but it's something that you won't regret seeing after leaving the auditorium. This is the perfect movie to see with your friends and discuss your views on Shakespeare after leaving. I believe the only other film to do that this year was 'The Help,' and that was to see what people thought of the film in terms of the book. Mr. Emmerich, I salute you, because despite not having many films outside of disaster flicks to have on your resume, 'Anonymous' is your masterpiece, and it should be seen by anyone looking to learn something and get confused unless you have a focused mind and can keep track of what time period you're in at a certain moment.

Posted by Zachary Marsh at 4:41 PM